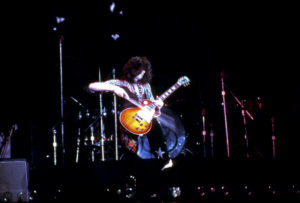 Jimmy Page who many consider to be the most famous and inspirational rock and roll guitarist of the classic rock era had stated in a GQ Magazine article published earlier in the year that he is itching to get back on stage and start performing once again. Yet, before Led Zeppelin fans begin to start having strokes in anticipation of a Led Zeppelin reunion, the legendary guitarist was not specifically talking about a reforming Led Zeppelin  and had not given any specific dates but rather just seems to be really yearning to getting back on stage and performing in some sort of musical situation. Whatever that means, no one knows for sure yet, but it’s obvious that the man has been yearning to get back on the stage since that amazing night in 2007 when Led Zeppelin reunited for one magical concert.

The Led Zeppelin show in 2007 proved that the band could still sound great. Of course there were the typical haters that always had negative stuff to say, but in reality the band smoked it. They never would have released the show on video and audio if they had not. Robert Plant has always been the one it seems that never wanted to reunite Led Zeppelin. The man has many reasons, but the first and most important one has always been his argument that they could never replace John Bonham. An argument most real Led Zeppelin fans who knew the band so well would agree with. However, if you saw the show that night, John Bonham’s son Jason did such an incredible job of filling in for his late father.

It was obvious that with Jason Bonham on the drums, it would have worked. He has the spirit of his father with a much more developed technique that sounds amazing and really fueled the band that night. You know Jimmy Page recognized that immediately and so did Plant and Jones.  They never would have done the show if the rehearsal didn’t feel good. They hit the stage that night with such confidence because they could tell in rehearsals they still had it.

It’s hard to believe that the reunion show was already fifteen years ago. Time passes so quickly. Sadly, the passing of time is one of the reasons Jimmy Page is getting the itch to begin performing again. It’s not the only reason but the man is in his 70s and so the clock is ticking louder with each passing day. The passing of Charlie Watts recently probably weighs heavily on the minds of the rock stars who arrived on the scene in the 1960s.

It’s not just age and nostalgia that has Jimmy Page itching to hit the road again, It’s the effects of the pandemic on the arts that had made Jimmy Page speak up about hitting the road. Jimmy Page has spoken up about how the effect of the pandemic have kept musicians apart. He disdains the use of collaborating by just sending files back and forth. Jimmy Page claims that he would never do such a thing. As any really musicians who have been in the trenches and in battle conditions on a live stage or in a studio with other musicians understands, the magic happens live.

You can’t feel each other’s grooves from tape. It’s just like playing with a record, the music never changes and your the only one attempting to do so. Even trying to play live over a Zoom call doesn’t work because there is always a bit of a delay in transmission which destroys the art of groove. Musicians feed off each other in a live situation. They need to feel the vibes from each other that generates the swing, feel and above all emotion. It’s the reason Jimmy Page is yearning to hit that stage again and play with some real live musicians even if there names are not Plant and Jones.

When looking back at the career of Jimmy Page the man has done multiple musical projects he could point to for material. Of course, Led Zeppelin looms the largest and anyone seeing Jimmy Page on stage is going to just want to hear the Led Zeppelin material. Yet, there was also the Yardbirds that he could pull material from as well as the forgotten band The Firm. Although Led Zeppelin fans have not forgotten that one. There was also the solo album Outrider which had some killer songs on it. As long as he doesn’t have David Coverdale performing with him we probably won’t hear anything from the Coverdale Page album, yet who knows what may happen. All I know is that if I hear that Jimmy Page is performing on a stage near me, I don’t care who else is on the stage, I will be there. The last time I saw Jimmy Page on stage was 1977 and that was just way too long ago. With Robert Plant’s recent tour announcements with Alison Krauss we feel that Jimmy Page’s statement to GQ magazine earlier in the year to start performing and possibly touring again, we expect it to happen sooner than most fans have come to expect.