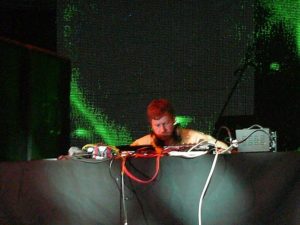 Before becoming Aphex Twin, Irish-born Richard James actually grew up in the southwestern region of England, specifically Cornwall. Before learning to write music, the young James already began to experiment with different sounds as a child. His preference was in analog synthesizers he’d modify to adopt a more electronic sound. By the time he was fourteen years old, he began to make his own music, which focused heavily on combining the sounds of the acid house sub-genre music and electro-techno beats. He would perform this as an artist at the nightclubs of Cornwall, England before his popularity rose where he’d record his first studio album, Selected Ambient Works 85-92, which was released on November 9, 1992. By this time, he adopted the stage name of Aphex Twin.

Since 1983, even before officially recording his forty-nine extended plays (EPs), Aphex Twin had already become a solid fixture in the nightlife’s music scene. This was reflected in his first studio album. In total, he has nine studio albums to his name, as well as six compilation albums. Although he only has seven singles listed in his discographic portfolio as Aphex Twin, Richard James has recorded a number of songs through a few different aliases. However, his best-recognized work is what he released as Aphex Twin. He also has the aliases of AFX, Analogue Bubblebath, Bradley Strider, Caustic Window, Dice Man, GAK, Polygon Window, Power-Pill, and The Tuss.

From the 2014 studio album, Sylo, “XMAS_EVET1 N” served as a standout piece of trance-like music that entices the listener into the electro-synth wave of sound from its melodic start to its mesmerizing finish. The chimes added a hypnotic mood that seemed to toy with the audio senses as it played alongside the collection of instruments involved in the song.

“Afx237 v.7” was a track from Drukqs, the fifth studio album released through the Aphex Twin name. This piece was used in a short film presentation in 2005, Rubber Johnny. When the song is paired with the eerie video and some of the vocal sounds that accompanied it, the elevation of drama adds more impact to the song as it plays out.

Composed as a music video presentation, Monkey Drummer featured a nine-limbed mechanical device playing the drums. Designed as a humorous short film as the head of this device was that of a monkey. The song used was the first two and a half minutes of “Mt Saint Michel + Saint Michaels Mount,” which came from Aphex Twin’s tenth studio album, Drukqs, which was released in 2001.

Drukqs was Aphex Twin’s fifth studio album, which was released on October 22, 2001. “Avril 14th” is a piano-rich song that delivered a calm wave of sounds that also featured 1980s-style synth aesthetics. Drukqs isn’t quite as electronic-sounding as most of the music credited to Aphex Twin, but it does have a refreshing psychedelic ambiance to it makes it a worthy favorite. As of 2017, Avril 14th has streamed on Spotify well over a hundred million times. It has also been used as musical pieces in three different feature films, namely Marie Antoinette, Four Lions, and Her.

“MARCHROMT30A edit 2b 96” was 2014 single released from Aphex Twin’s sixth studio album, Sylo. Although the song didn’t receive any chart success, the gritty masterpiece behind the soft hypnotic bass and electro-groove is regarded as nothing less than blissfully genius by music reviewers like Bleep.

The single and EP, “Ventolin,” was released on March 27, 1995, is especially noted for its abrasive, heavily distorted techno beats. The inspiration behind the song came from Richard James’ reaction to the asthma treatment drug, salbutamol, which ultimately led to him dealing with the condition known as tinnitus. The constant high-pitch ringing in the ears is the effect the artist delivered through the stage name of Aphex Twin, which has brought Ventolin the reputation as one of the most aggressive songs he’s ever recorded, but as well as among his best.

“Girl/Boy” was a single Aphex Twin released through his EP of the same name on August 19, 1996. On Denmark’s Top 40 chart, it peaked at number nineteen. On the UK Singles Chart, it appeared at number sixty-four. The song is also one of the tracks featured on the album, Richard D. James, but it was through his pseudo name of Aphex Twin. The album came out the same year as the EP. As for the single, it’s become regarded as one of the best songs credited to the artist by the UK publications, Fact and New Musical Express (NME).

Titled as “minipops 67 (120.2),” this single became a moderate hit on the US Billboard Dance/Electronic Songs chart in 2014 as it charted at number thirty-eight. It came off Aphex Twin’s sixth studio album, Syro. The song’s title is referenced to a 1967 Japanese earlier drum machine, which is illustrated through the disorientation of lyrics and heavily synthesized instrumentation that was used in the artist’s musical arsenal.

“Come to Daddy,” was the lead single from Aphex Twin’s EP of the same name, which was released in 1997. For Richard James, he admitted he wrote the song as a joke and had it pulled from circulation a week after it was released in hopes it would not reach number one on any singles chart. On the UK Singles Chart, the song peaked at number thirty-six and it appeared at number thirty-seven on the US Billboard Heatseekers chart. In Denmark, the death metal-style song was popular enough to reach number ten on its Tracklisten Top 40 record chart. Come to Daddy was believed to serve as a parody to The Prodigy’s 1996 hit single, “Firestarter”.

On March 22, 1999, “Windowflicker” was first released as a single. It won Single of the Year with the New Musical Express (NME) in 2000. On the UK Singles Chart, the song peaked at number sixteen and it also charted as high as number fifteen on the US Billboard Dance/Electronic Singles chart. Between the rapid breakbeat drum performance, the manipulation of the vocals, plus the erotic ambiance, Windowflicker served as one of those eerie pieces of music that seemed to either leave much or little to the imagination, pending on the listener’s reaction to the song as they get caught up in it.