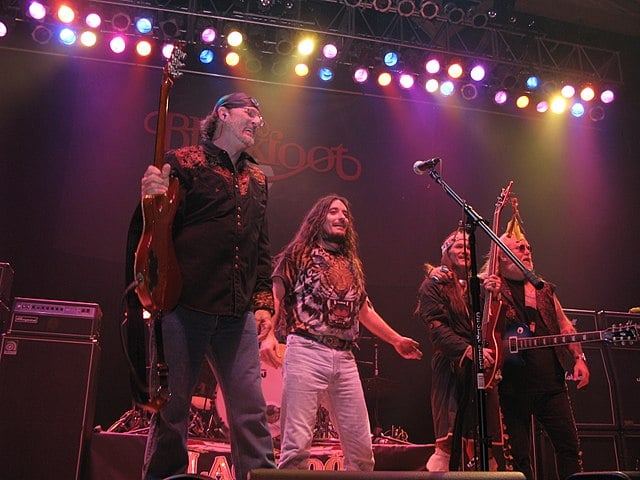 Our Top 10 Blackfoot Songs takes a look at a fantastic southern rock band that released some great music in the latter part of the 20th century. Blackfoot is one of those great classic rock and roll bands who maintained a loyal following but never really achieved mass cultural success like their contemporary southern rock bands such as Lynyrd Skynyrd, The Outlaws, The Marshall Tucker Band, Charlie Daniels Band and even groups like 38 Special or Molly Hatchet. The sound of Blackfoot very much echoed the style of Lynyrd Skynyrd. There is good reason for that besides the popularity of Lynyrd Skynyrd.

Blackfoot’s original bandleader and lead singer and guitarist Rickey Medlocke, along with bassist Greg T. Walker had become members of Lynyrd Skynyrd during the band’s early days in 1971.Eventually, Medlocke and Walker would leave Lynyrd Skynyrd and form the band Blackfoot that they had originally been working on. After a few ar years of dealing with some personal issues and medical problems among members of the band Blackfoot, the band signed a record deal. Blackfoot released their first album in 1975 entitled No Reservations. They followed up that album a year later in 1976 with the release of the LP called Flyin’ High.

Continuing with our Top 10 Blackfoot songs list we turn to the song “Send Me An Angel.” The band sounds dramatically different on this 1983 album entitled Siogo than they did in the 1970s. The sound of the big 1980s surely comes into play here.

Listen to those guitars scream at the start of this one. This is heavy rocking Blackfoot and we love it. The song “Good Morning,” was the opening track on the band’s hard rockin album Marauder. The album was released in 1981. These guys should have been so much bigger than they were. This one cranks to 11.

“After The Reign,” was the title cut to the album After the Reign. The album was released in 1994. The great guitarist Zakk Wylde performs a killer guitar solo on this smoking track.

Once you get past the opening dialog, this track explodes into southern rock and roll Heaven. This is easily one of our favorite Blackfoot songs. The track “Fox Chase,” was released on the album Tomcattin’  The album was released in 1980.

At the halfway point on our top 10 Blackfoot songs list wer turn once again to the great 1975 album Strikes in presenting the song “Left Turn On A Red Light.” The song was written by Rickey Medlocke and Jakson Spores. It’s incredible how much this sounds like Lynyrd Skynyrd.

This great cut entitled “Railroad Man,” was released as Blackfoot’s first single release of their career. The song was placed on their debut album entitled No Reservations. The song Railroad Man was also used as the album’s opening track. The song never entered onto any of the Billboard music charts.

As we begin to come to a close on our top 10 Blackfoot songs list we turn to the band’s classic recording entitled “Highway Song.” This great track stands as one of the band’s most famous songs. It’s an all-time favorite among their fans. The song was released on their 1979 album entitled Strikes. This famous Blackfoot song entitled “Highway Song,” became the group’s highest-charting song of their career. The track “Highway Song,” hit number 26 on the Billboard Hot 100 in 1979.

We close out our top 10 Blackfoot songs list with one more track from the famous Strikes album. The song “Train, Train,” was released as the second single from the album. The song was written by Rickey Medlocke. The song “Train, Train,” would go on to be covered by legendary country music singer Dolly Parton. She recorded it for her 1999 album The Grass Is Blue. An album that won Dolly Parton a Grammy award.

Top 10 Catfish And The Bottlemen Songs