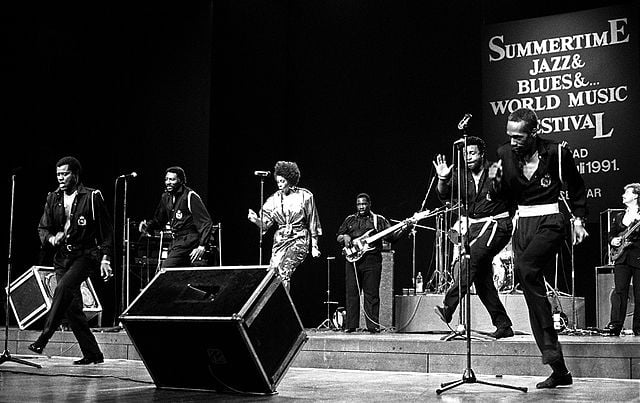 Our Top 10 Temptations songs list looks back at the career of one of the most successful and ground breaking groups in popular music history. The history of the Temptations is filled with multiple number one singles, ground breaking albums and lineups changes that altered their sound dramatically at different points in their career. While many casual fans are familiar with their sweet sounding hits like “My Girl,” and “Just My Imagination,” there are some people that are probably not aware of how the group helped pioneer what has been called psychedelic soul. Their records from that psychedelic period stand as some of the best songs released in the late 1960s and early 1970s along with their early soul hits.

The origins of the Temptations goes back to when Eddie Kendricks and Paul Williams formed a do-wop group in 1955 called The Cavaliers. The musicians eventually changed their name to the Primes. After a merger with the group the Distants and more name changes amidst a revolving door of musicians, members from the various groups formed a group called the Elgins that would stand as the original lineup of the band that would become The Temptations. The group began releasing singles in the early 1960s utilizing the lineup that consisted of Eddie Kendricks, Melvin Franklin, Paul Williams, Otis Williams, and Elbridge “Al” Bryant. In 1963, Elbridge “Al” Bryant was thrown out of the group and replaced with David Ruffin.

The Temptations released their first full length album in 1964 entitled Meet the Temptations. It was an album filled with most of their previously released singles.  From that point on The Temptations would go on a stunning run with a lineup often referred to as the classic five fueled by the talents of Eddie Kendricks, Melvin Franklin, Paul Williams, Otis Williams and David Ruffin. The group would release the albums, The Temptations Sing Smokey in 1965, The Temptin’ Temptations also in 1965, Gettin’ Ready in 1966, The Temptations with a Lot o’ Soul in 1967, The Temptations in a Mellow Mood  also in 1967  and The Temptations Wish It Would Rain in 1968 all with the Classic Five lineup. Many of the band’s original songs were written and produced by Norman Whitfield who played a major role in the success of the band along with the power of Berry Gordy and Motown records.

In 1968, the band fired David Ruffin because of his so called diva behavior. The group replaced Ruffin with Dennis Edwards. The major lineup change would spark a significant change in musical direction for the band. Over the next four years, the group would release albums that were defined as psychedelic soul. For many, the songs they released during this period were some of the strongest songs the group ever released.

Since 1968 to the present day in 2020, The Temptations have released forty three studio albums and one hundred and three singles. The history of the band is deep as there have been so many lineup changes and so many stories to tell that go way beyond the scope of this Temptations songs list. This top 10 Temptations songs article will focus mainly on their 1960s and 70s material. Of course the group has released so much great material, plenty of the classics will be left out, but a top 10 lists only has room for 10!

We open up our top 10 Temptations songs list with a song from their psychedelic era. Inspired by the music of Sly & The Family Stone, The Temptations delivered their first album of psychedelic music with their Cloud Nine album in 1969. The song “Cloud Nine,” also won a Grammy Award for Best Rhythm & Blues Group Performance, Vocal or Instrumental. What’s even more interesting about the band winning a Grammy Award for the song was the fact that the “Cloud Nine,” Grammy turned out to be Motown Records first Grammy Award win.

Continuing with the psychedelic side of the Temptations we turn to one of the band’s most heavy psychedelic numbers entitled “Psychedelic Shack.” The album’s title cut represented the fourth and final album of the band’s psychedelic period. By the time the group released this record they sounded nothing like the original Temptations. They had really strayed away from their pop soul sound into the realms of psychedelia. It wasn’t only the Temptations that had gone down the road of psychedelia in the late 1960s. So many bands experimented with the genre that had become very popular during that very volatile time period in the late 1960s in the United States.

While this Temptations songs list focuses on a good amount of their rock and soul psychedelic music from their late 1960s and early 1970s period, we cant ignore their number one hits and some other brilliant pieces of music they released during their spectacular career. One of their finest moments is presented here with the song “I Wish It Would Rain.” One can hear the pain in David Ruffin’s heart so clearly as he sings the song’s heartbroken lyrics. The song was written by Norman Whitfield, Barrett Strong and Rodger Penzabene. “I Wish It Would Rain,” was released as a single in 1967.

Many classic rock fans know this one from Rod Stewart’s rocking version. However, the Temptations did it first and their own version was just as special. The song was released in 1967. It went straight to number one on the U.S. Billboard R&B Charts and broke the Billboard Top 100 peaking at number eight.

Make sure you put on your dancing shoes before you listen to this one. The Temptations “I Can’t Get Next To You,” is one of four number one hits they had during their magical career. It went straight to number one on the U.S. Billboard R&B Charts and then landed in the number one spot on the Billboard Top 100. The song was released in 1969. It became one of the biggest selling singles of their career as the single also went Platinum in sales. Listen to that piano lick at the begging and the r&b groove that sweeps in. Unbelievable! The song was written by Norman Whitfield and Barrett Strong.

Everyone knows this one. This is a party song! A feel-good song! Simply just a great song in every single way. Piano players love playing this one. If you don’t like this, just stop reading and go away. The song went straight to number one on the U.S. Billboard R&B Charts and broke the Billboard Top 100 peaking at number thirteen. The song was written by Norman Whitfield and  Edward Holland Jr..

The song “Get Ready,” is one of The Temptations most defining moments. The heartbeat of 1960s soul and the Motown Sound is presented right here in this smoking song. “Get Ready,” went straight to number one on the U.S. Billboard R&B Charts and broke the Billboard Top 100 peaking at number twenty nine in 1966. The song was written by the legendary Smokey Robinson.

If you ask any music fan to name one Temptations song, most of the time they would name “My Girl.” One can never forget that opening bass line, those soaring strings and of course that magical spirited chorus. “My Girl,” is not only one of the greatest Temptations songs of all time, its simply one of the greatest songs of all time across the board. It’s a true standard.

“My Girl,” went straight to number one on the U.S. Billboard R&B Charts and broke the Billboard Top 100 peaking at number one in 1964. In fact, it was the groups first number one single of their career. The song was written by Smokey Robinson and Ronald White

While most fans probably would have thought that songs like “My Girl,” and “Get Ready,” or even “Ain’t To Proud Too Beg,” would have claimed the top two spots on this top 10 Temptations songs list, we felt that the next two songs had just as much of an impact on music as their sweet sounding soul hits. “Ball of Confusion (That’s What the World Is Today)” was released in 1970. The song went to number two on the U.S. Billboard R&B Charts and broke the Billboard Top 100 peaking at number three. It was not only a huge critical success, the song was a spectacular commercial success as the single went Platinum in sales.

We close out our top 10 Temptations songs list with their classic recording “Papa Was A Rolling Stone.” This was not just about a great song, it was also about a great production, It was about a legendary group recoding a masterpiece like The Beatles did with Sgt. Pepper’s Lonely Hearts Club Band or Queen did with Bohemian Rhapsody, you get the point. Great groups deliver masterpieces at least once during their career, “Papa Was A Rolling Stone.” was the Temptations  It went  to number five on the U.S. Billboard R&B Charts but had even more success on the Billboard Top 100 as it hit number one in 1972. The song was written by Norman Whitfield and Barrett Strong. It was originally recorded by the Motown group the The Undisputed Truth in 1972. However. it’s the Temptations’ Grammy Award winning version version and production that has become legendary.