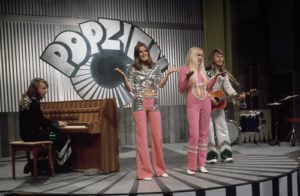 If your one of the millions of ABBA fans that thought they would never see another ABBA studio album ever again, your going to be shocked right back to your 70s dancing shows to learn that ABBA is returning with a new album after 40 years have passed since their last studio release. Yes, that’s right ABBA returns after a 40 years absence with a new studio album of all brand new original songs. In a statement the group said that they had taken a break in the Spring of 1982 and now it was time to end the break

The album entitled Voyage is set to be released on November 5 2021.The album will contain ten brand new ABBA songs that have never been released before and have been written and recorded for their new album. Two songs have already been released as pre-singles. We have placed the streams to the new songs “I Still Have Faith in You,” and “Don’t Shut Me Down,” at the end of the article. It sounds like they never left.

The news songs are simply fantastic. The group sounds great. It’s so wonderful to be able to hear new music from ABBA recorded with modern technology. The group’s last album entitled The Visitors was released in 1981. Recording technology has come a long way in the last forty years. The Visitors album was actually one of the first albums to use digital technology in the recording process. It was also one of the first albums to be put on CD. Still digital recording techniques sounded very thin during the early years and have been dramatically improved over the past forty years.

The release of ABBA’S first new album in forty years coincides with the announcement of a new ABBA tour. However this will be the most futuristic tour a band has ever undergone because the group won’t have to actually even show up to their own concerts unless they want to sit in the audience and watch themselves. The new ABBA concerts will utilize digital versions of the four members of ABBA. The group has partnered with Mr. Star Wars George Lucas, (or should we say ex-Mr. Star Wars since he sold it all to Disney) and put together a series of concerts working with George Lucas’s Industrial Light & Magic company.

What this means is we will probably be seeing very young versions of ABBA  singing all their hits on some sort of monster sized digital screen with an amazing sound system and light show. It seems there will also be some sort of  holographic images of the group  also dancing around the stage. Sounds interesting, but I think fans would probably really prefer to see Agnetha Fältskog, Björn Ulvaeus, Benny Andersson, and Anni-Frid Lyngstad in the flesh live on stage singing their hits and new songs. Nonetheless, maybe it will be incredible and we should reserve judgement until the show debuts.

It’s the show itself that actually inspired the band to release new music. The group had begun putting all of this together back in 2018, but the Coronavirus pandemic delayed the recording sessions just like it screwed everything else up. Nonetheless, the album is now all completed and being released on November 5 2021.

ABBA’s musical career only really lasted originally less than ten years. The group had released their first album back in 1973 entitled Ring Ring. From that point on ABBA released only seven more studio albums including Waterloo in 1974, ABBA in 1975, Arrival in 1976, The Album in 1977, Voulez-Vous in 1979, Super Trouper  n 1980 and their swan song The Visitors in 1981. They also released fifty five singles during their run. They had multiple number one hits around the world as they became one of the biggest selling bands in music history. There popularity has never waned especially with the success of the broadway play and motion picture Mama Mia. Now there back. Can’t wait to see that show there putting together. Wonder if Yoda will show up too.