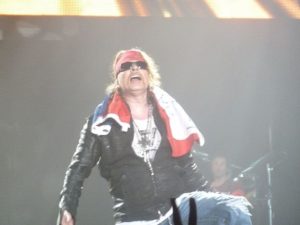 There was a time when we thought that the possibility of any sort of Guns N’ Roses reunion would ever happen in a quadrillion years to quote the famous Dr Evil. There just seemed to be too much anger, too much bad blood between members of the band. Things have changed dramatically in the music industry over the past 10 years. Bands and artists no longer sell music. Pretty soon the younger generation is not even going to know what a CD was. The streaming industry has turned the music world upside down and legendary rock stars who thought they never would have to work again have been forced to go back in the road. Band members who hated each other are now playing together again on stage in front of audiences filled with 50 to 7o years olds shelling out what amounts to a car payment for a single ticket to see their old heroes play their old hits.

We thought we would never see Guns N’ Roses play together again, well these guys like their fast cars, fast cars that cost a lot of money. So as the Eagles once said Hell has frozen over as we have welcomed back one of the greatest bands ever that screwed it all up when they were on top of the world.

It has been a great thrill for us old rock fans to have the opportunity to see Guns N’ Roses perform live again. Yet, the band has turned up that thrill level to eleven recently with the debut of two new songs during their live shows. Well, almost two new songs. Last month during the band’s stand at Boston’s Fenway Park, Guns N’ Roses performed a new song they called “Absurd.” The song was actually a revised or reworked version of a song called “Silkworms,” that was cut for the Chinese Democracy album but was never released on the album. Axl Rose was well aware of the bootleggers as he spoke to the crowd at Fenway Park saying “some of you may have heard this one before.” The songs sounded incredible as it defined the Guns N’ Roses signature sound but with a much more updated modern feel. They would have made Tom Morello proud. Many fans thought that might have just been a one off. A chance for the band to have some fun performing a rarity. However, there may be much more to it than that.

Last week a video began circulating on Tik Toc of Guns N’ Roses  rehearsing a song during a soundcheck in Chicago of a song called “Hard Skool.” Of course all the die hard Guns N’ Roses fans recognized the song immediately as another song that was recorded for the Chinese Democracy album but was never released. In fact, supposably there were close to sixty songs recorded for that album. It sort of makes sense when you remember back how many years had passed by before Axl Rose would release the new album. So much time had gone by that when the album was eventually released it wound up bombing big time as the group had lost a significant amount of their fan base over the years as music changed and fans moved on to other things like raising kids, paying bills, or listening to bands like Rage Against the Machine instead. Nonetheless, the rehearsal of the song “Hard Skool,” recently in Chicago was yet another clue that something quite wonderful may be happening in the Guns N’ Roses world.

Something wonderful has most definitely happened in the land of Guns N’ Roses as the band has released their first new single sinces 2016 entitled “Hard Skool.” For the first time in a very long long time Slash and Axl and the rest of the boys together again on vinyl (or in this case as of now just youtube) releasing new music. Who would have ever thought that we would see the day when these guys released new music together. The song is just pure vintage Guns N’ Roses, There’s not a rock and roll fan on the plant who won’t love this new Guns N’ Roses song. Now of course the next question is inevitably  does this mean there’s a chance of a new Guns N’ Roses album?