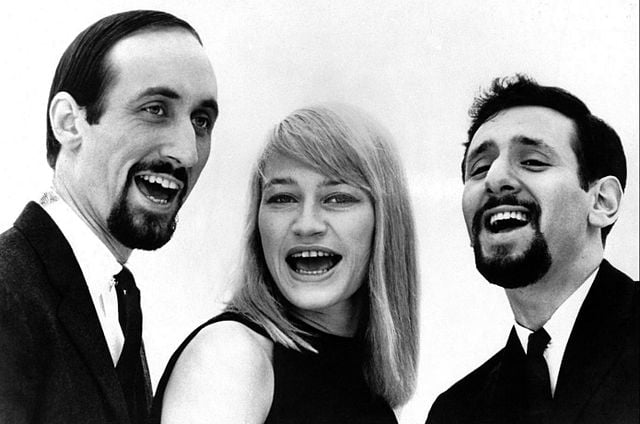 Our Peter, Paul and Mary songs list takes a look at a truly legendary vocal trio that were extremely popular in the 1960s. No matter what age you were, if you were alive in the 1960s you heard the music of Peter, Paul and Mary. The group originated in New York City in the early 1960s formed by Peter Yarrow, Paul Stookey and Mary Travers. The group was formed by music manager Albert Grossman. The trio were an instant hit in both the United States and the United Kingdom. The group released their first album entitled Peter, Paul and Mary in 1962. The album went straight to number 1 on the US Billboard top 200 album chart. It remains their most famous album having sold two million copies. That’s a pretty good start.

Their success would not end with their first album. Peter, Paul and Mary continued to release albums throughout the entire decade becoming one of the biggest selling acts of the 1960s. In a decade that saw so many changes in music with the arrival of the British Invasion bands like The Beatles, The Rolling Stones and The Kinks, plus the infiltration of psychedelic music and progressive rock, Peter, Paul and Mary stood as an alternative to those who just wanted to enjoy simple folk pop music with beautiful harmonies and angelic voices.

Peter, Paul and Mary broke up in 1970. Like many bands that had great success in the 1960s, the band broke up for its members to pursue their own solo careers breaking free from whatever that they felt held them down. In 1981, the band reunited and began to tour again and release albums. Sadly, in 2009, Mary Travers died at the age of 72. Fans of the music of the 1960s Peter, Paul and Mary will always be remember their songs with great joy. This Peter ,Paul and Mary songs list celebrates 10 of their best songs.

Continuing with our Peter, Paul and Mary songs list we turn to the band’s second single of their career entitled “If I Had a Hammer (The Hammer Song).”  The song was originally released in the 1940s by the Weavers. The song was written by Pete Seeger and Lee Hayes. The song would become part of traditional folklore, a genre that Peter, Paul and Mary had great success with. “If I Had a Hammer (The Hammer Song),” would become Peter, Paul and Mary’s first top 10 hit on the Billboard Hot 100. They opened the band eyes to the success they could have with traditional folk music and the large audience that loved it. The vocals on this are spectacular as well as that great guitar strumming.

At number eight on our Peter, Paul and Mary songs list we turn to the song “Day Is Done.” Like so many musical artists of the 1960s who released music that protested the Vietnam War, Peter, Paul and Mary did the same with this Peter Yarrow song in 1968. “Day is Done,”was released on the album Peter, Paul and Mommy. The song hit number 21 on the US Billboard Hot 100. It was a top 10 hit on the U.S. Billboard Adult Contemporary Charts peaking at number seven. “Day is Done,” would become one of the most popular Vietnam War protest songs released in the 1960s.

# 7 – Where Have All The Flowers Gone

Peter, Paul and Mary’s first album was just a simply spectacular collection of traditional folk songs in which every single one of the tunes recorded on the album could have been a big hit. The album’s closing song “Where Have All the Flowers Gone? was written by Pete Seeger. It was never released as a single by Peter, Paul and Mary but it stands as one of our favorite Peter, Paul and Mary songs of all time. This one is just simply breathtaking. A song that really depicts the sadness of war and the loss of soldiers lives.

Opening with that traditional Bob Dylan guitar sound on one would never know this was Peter, Paul and Mary until the vocals came in.Even on the first verse which is sung by just a single voice the listener may have wondered. But it’s when those harmonies come in very slowly that the game is over. This great Bob Dylan song was a big hit for Peter Paul and Mary has a broke the Billboard top 100 stop 10 in 1963. The song was released on the album in the Wind. It was the second Bob Dylan single in the row that the group released from that album.

At number four on our Peter Paul and Mary songs this week for Saint Peter Paul and Mary’s debut single entitled Lemon Tree. The song was released on that first album Peter Paul and Mary. The song lemon tree was a traditional folk song written by Will Holt in the 1950s. Peter Paul Mary had a top 40 hit with the song as a peaked at number 35 on the US Billboard Hot 100. The song Lemon Tree has been recorded by many different artists over the years including The Seekers, Chad and Jeremy, the Kingston Trio and even Bob Marley and the Wailers.

Everyone who grew up in the sixties and seventies remembers “Leaving On A Jet Plane,” as a very famous John Denver song. Peter Paul And Mary recorded the song in 1967 for their album entitled Album 1700. The group released it as a single actually two years later in which it would become Peter Paul and Mary’s only number one single of of their career as it hit the top spot on US Billboard Hot 100 in 1969

It’s amazing that a children’s poem would be such a big hit, but this one was. Peter, Paul and Mary’s  rendition of the children’s poem by Leonard Lipton in “Puff (The Magic Dragon)” became a massive hit single for the group. The song was the lead single from the band’s second album entitled movie. “Puff (The Magic Dragon)” would hit number two on the Billboard Hot 100 in 1963.

We close out our Peter Paul and Mary songs list with their rendition of Bob Dylan’s famous song Blowin’ In The Wind. This song infiltrated mass culture Beyond just pop culture. It was so huge in the 1960s. One of the greatest protest songs ever written not just about war, but about the quest for peace, for freedom,for men and women’s simple quest to live a happy, fair and pain free life. Where were the answers to all of that? Well of course the song lets you know.