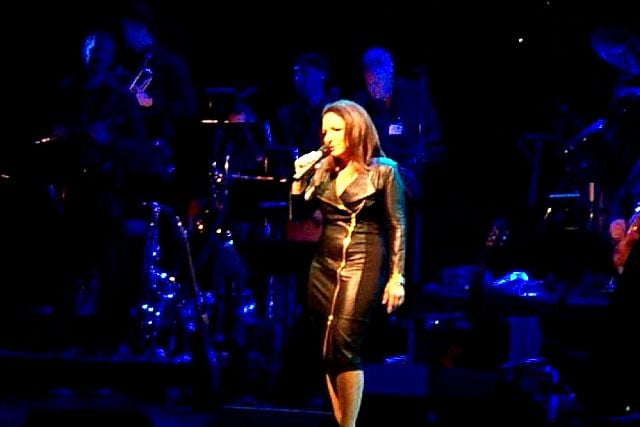 We open up our top 10 Gloria Estefan and the Miami Sound Machine songs list with the band’s first big single entitled “Dr. Beat.” The song was released on the band’s album Eyes of Innocence which was issued in 1984. Eyes of Innocence was actually the bands eighth album, but it was the first recording issued in English. “Dr. Beat,” was not originally a huge hit in the United States but it was a big hit internationally. The song became more popular in the US after Miami Sound Machine hit it big with the release of their second album entitled Primitive Love.

Continuing with our Gloria Estefan and Miami Sound Machine songs list we turn to the song “Oye,” which should not be confused with the other Gloria Estefan song titled Oye Mi Canto. “Oye,” was released on the Gloria Estefan solo album entitled Gloria! It was the second single released from the album. While it did not chart on the U.S. top 100 it hit number one on the Billboard US Latin charts and number 1 on the US Billboard dance charts. It also hit number one on the pop charts in Spain and number 33 on the United Kingdom pop charts. This is a spectacular song that recalls the Miami Sound Machine glory days. The song was released in 1998.

At number eight on our Gloria Estefan and Miami Sound Machine songs list we turn to the group’s final single release entitled “1-2-3.” The song was released on the album Let it Loose  in 1988. The song “1-2-3,” was  a huge hit in the United States as it hit number three on the US Billboard top 100. The song also hit number one on the US Adult Contemporary Music charts. This was a fun one!

We always loved this Gloria Estefan and Miami Sound Machine song “Bad Boy.” Gloria Estefan’s performance of this song was just simply captivating. She was so cute in the video and the song was just so addicting. The song “Bad Boy,” was the second single released from the Primitive Love album. It was the second of three top 10 hits released from the album. In 1986 “Bad Boy,” hit the number eight spot on the US Billboard Hot 100. The song was written by Larry Demer, Joe Galdo and Rafael Vigil. It was produced by Emilio Estefan Jr. Many of us were still getting to know Gloria Estefan at this point in the United States outside of the Latin music world as this was only the band’s second big-time single after “Conga.”

While on the topic of Gloria Estefan solo number one hit singles, we present her first one. The song “Don’t Want To Lose You,” was the lead single from Gloria Estefan’s first solo album entitled Cuts Both Ways. The song was released in 1989. Don’t Want To Lose You,” hit number one on the US Billboard Hot 100 singles charts as well as the US Latin singles charts and number two on the US Adult Contemporary Songs Charts. The song also hit number one in Spain, number 5 in Ireland, number six in the United Kingdom and number three in Canada. This was a huge hit single that also went gold.

Gloria Estefan was such a brilliant and talented singer that she was able to nail the high-energy Latin rhythm recordings as well as the slow heartbreaking ballads. However one of her real strengths was the way she sang those mid-tempo numbers like this great track “Words Get In The Way.” Fueled by that famous Yamaha DX7 synthesizer marimba sound riff, the song “Words Get In The Way,” was was released on the album Primitive Love in 1986. It was the band’s first time breaking the top five of the US Billboard Hot 100.

As we begin to wind down this Gloria Estefan and Miami Sound Machine songs list we turn to one of our favorite all-time Miami Sound Machine songs with the explosive hot Latin dance track “Rhythm Is Gonna Get You.” Oh baby did we love this one. So did many others. Anyone with a pulse, jumped out of that chair when they heard the beginning percussion rhythms of “Rhythm Is Gonna Get You.” This song was just so good. “Rhythm Is Gonna Get You,” was released as the lead single from the band Let It Loose album in 1987. The song wads a monster hit breaking into the US Billboard Hot 100 top 10 and peaking at number five. If you want to get the party started, just flip on this tune. If you want to keep it going, just skip on to the next one on this list.

We close out our Gloria Estefan and Miami Sound Machine songs list with the band’s signature song entitled “Conga.” The song was released on the band’s first English language music album Primitive Love in 1985. It was a song that broke the band big time and turned everyone’s heads asking who is this? “Conga,” broke into the US Billboard Hot 100’s top 10 right at the top peak at number 10. It also became an international hit around the world. The song has been covered by many groups, but none can come close to the original Miami Sound Machine recording. The song was written by the band’s drummer Enrique E. Garcia.