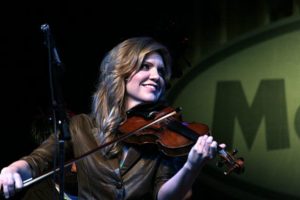 Thanks to her sublime vocals, she replaced Andrea Zonn when she was just twelve years old, joining songwriter and bassist John Pennell in the Silver Rail band. However, the band would later take the name Union Station after realizing another bad with their former name. Later on, Alison Krauss signed to Rounder Records, where she would record her music and release an album Too Late to Cry two years later, using Union Station as her backup band. Her 1990 album I’ve Got That Old Feeling would become her first to enter the Billboard Charts. Two years later, Alison Krauss would receive her second Grammy Awards for Best Bluegrass Album thanks to the superb album with Union Station Every Time You Say Goodbye. The floodgates of success opened for Alison Krauss, and by 21, she was already a member of the Grand Ole Opry.

Ushering us to the top 10 Alison Krauss songs is the hit “Goodbye is All We Have.” Written by Sarah Siskind, the song is one of the favorites from Alison Krauss’ collaboration with Union Station. The band has, over the years, provided her with the best instrumentals she would possibly need for her awe-inspiring song. Alison’s magical voice hooks you from the beginning of the song till the end, making you fall in love with her art almost imminently.

Featured on her 1990 album I’ve Got That Old Feeling, “Steel Rails” was Alison’s first song to achieve mainstream success. The song found her comparing her new journey as a single woman to a train slithering down the track without ever looking back. Ever since the release of this song, Alison Krauss has seen greater days in the music industry than most artists will ever do.

Alison Krauss might have found yet another soul who compliments her singing style that you might think they have had a lifetime of practice together. Her duets with Led Zeppelin’s singer and songwriter Robert Plant are more than words can describe. Probably the reason even some felt like the two had a thing going on. But hi, it’s music at its best! Featured on their 2007 collaboration album Raising Sand, “Please Read the Letter” was originally a song from Jimmy Page and Robert Plant’s 1998 album Walking into Clarksdale. The song is about yearning for someone for some ‘unfinished business’ two souls had. Alison Krauss and Robert Plant impressed even critics and saw the song win the 2009 Grammy Award for the Record of the Year Award.

Featured as the first single on her album New Favorite, “The Lucky One” is one of Alison Krauss’ best releases of all time. The song was her best performing release on the Billboard Hot Country Songs since her 1995 hit “When You Say Nothing At All.” She would later receive a Grammys for the Best Country Performance by a Duo or Group with Vocal and Best Country Song thanks to her sublime performance on the song.

“Paper Airplane” was a hit born from a call made by Alison Krauss to her go-to person, songwriter Robert Lee Castleman to whom the song’s lyrics are credited. After a call to Robert, Kraus received a delicate and forlorn melody from him, which would later evolve into the title track of the album Paper Airplane. As suggested by its title, the song makes turns and twists around the meaning of the old anecdote ‘Love conquers all.’

Featured on the Grammy-award winning album Raising Sand, “Gone Gone Gone (Done Moved On)” is one of the best cover songs from Alison Krauss and Robert Plant. The original song was released by The Everly Brothers back in 1964 in the song-titled album. Gone Gone Gone proves that having the rock legend sing along a bluegrass icon might have been the best decision ever made in the music industry history.

When you take on one of the most recorded gospel songs, it’s advisable that you top other artists’ performances. However, Alison Krauss didn’t have quite a problem with that, for she was quite a remarkable artist in the bluegrass genre. Her version of “I’ll Fly Away” give Jim Reeves’ version quite some competition or even topple it. Alison Krauss’ version of “I’ll Fly Away” won the Gospel Recorded Performance of the Year in the 2001 International Bluegrass Music Association Awards.

“Down to the River to Pray” is the best release from Alison’s Grammy-award-winning soundtrack album O Brother, Where Art Thou? Alison Krauss’ voice never fails to offer the chills and even greater emotions now with this gospel song. Even non-gospel critics attest to the greatness of the song’s a cappella performance by Alison with the First Baptist Church of White House, Tennessee.

Number one in our top 10 Alison Krauss songs list is “When You Say Nothing at All,” a song originally sang by Keith Whitley back in 1987. This timeless cover from Keith Whitley saw Alison Krauss nominated for the 1995 Grammy Award for the Best Country Performance by a Duo or Group with Vocal. Her version received massive airplay that her record label had it released to country radio. The song would become Alison’s first solo top 10 country song.