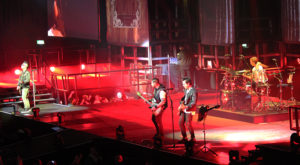 Our top 10 Avenged Sevenfold songs list introduces us to a band known for its diverse rock sound and theatrical imagery in album covers and merchandise. The band was founded in 1999, with Matt Sanders (M. Shadows) being instrumental to its formation. Although their music is far from religious, Matt Sanders shared the band’s name with reference to the biblical story of Cain and Abel. Avenged Sevenfold established itself with the metalcore sound in their debut album, Sounding the Seventh Trumpet, and the second album Waking the Fallen.

However, the band evolved to heavy metal and hard rock style with their third album City of Evil. Its members have cited NOFX, The Beatles, Black Sabbath, and Led Zeppelin, among others, to be the band’s influence. No one is proof of criticism, and for Avenged Sevenfold, this comes with being regarded as not metal enough. Nevertheless, vocalist M. Shadows came up with the perfect antidote to the claim by critics citing that the band plays music for the good of it and not really for the sake of being labeled a metal band. Avenged Sevenfold has gone to on to become a true sensation in the music arena, winning multiple accolades thanks to their moving songs. The band has released seven studio albums, two compilation albums, a single live album, and eighteen singles over their career so far. Our top 10 Avenged Sevenfold songs list brings the best of the releases from this highly metal-influenced band that has put no limit to their musical art.

Opening our top 10 Avenged Sevenfold songs list is “This Means War,” likened by some to Metallica’s “Sad but True.” Written by Avenged Sevenfold, the song was impactful to the band’s album Hail to the King. Its riff-based intro that features the band’s dual lead harmony approach fits into the song’s slow groove making it one of the best Avenged Sevenfold songs. The song starts in what feels like a chaotic intro highlighting a machine-gun spray but progresses to bring out something quite melodic. “This Means War” is a song about the internal battles that we exist in everyone’s mind. Metallica’s single “Sad but True.” The song charted at number four on the US Mainstream Rock Chart.

“Bat Country” is an award-winning single from the band’s album City of Evil. The song won Avenged Sevenfold 2006 MTV Video Music Awards for the Best New Artist Video. Thanks to the band’s collaborative effort on the song’s composition that had its lyrics help it become the band’s most commercially successful release. “Bat Country” is based on Fear And Loathing In Las Vegas, a book by Hunter S. Thompson. The song peaked at number sixty on the Billboard Hot 100 Chart.

While most of the best Avenged Sevenfold songs reviewed so far have more of a heavy metal style, “Dear God” is quite exceptional. The song is an original composition by the band that takes quite some country vibes. According to Johnny Christ, the song’s inspiration was the Avenged Sevenfold’s friendship with country duo Big & Rich. “Dear God” is featured as the fourth single on the band’s eponymous album.

Avenged Sevenfold turned one of the oldest philosophical mottos in western history, “Carpe Diem,” or as many know it, “Seize the Day,” into one of their greatest songs. The song was written by the band members and released as a promotional single for their album City of Evil. “Seize the Day” in itself is a phrase employed by many to urge someone to make the most of the present moment. Avenged Sevenfold sent a similar message with the song with vocalist M. Shadows, revealing that the song is about thinking twice about your actions while keeping those you love close.

“Shepherd of Fire” is the opening song to Avenged Sevenfold’s album Hail to the King. The band’s idea for the song was to have the song’s arrangement evoke imagery with the tribal yet primeval drums. The song was used as the theme song for Call of Duty: Black Ops II Zombies map “Origin” and also featured in EA Sports UFC. “Shepherd of Fire” reached at the peak of the US Mainstream Rock Chart and number twelve on the UK Rock and Metal Chart.

Written by the late Jimmy “The Rev” Sullivan, “A Little Piece of Heaven” is a song that is a romantic yet dark song from the band’s 2007 eponymous album. The song entails a bizarre storyline about a man who fears that his relationship with a woman will end; hence he takes control and ends the woman’s life. Obsession is painted real when the man in the song’s storyline preserves the corpse and gets intimate with it when he needs it. The woman comes back from the dead, kills the man, and the two in remorse get married in death, resting in their unnatural life before they begin killing other people.

Also from the band’s eponymous album is “Afterlife,” a song written by the late Jimmy “The Rev” Sullivan. The Rev left quite a mark on Avenged Sevenfold with the song “Afterlife” voted as the best Avenged Sevenfold song on their eponymous album. “Afterlife” the song is about a man who meets his death quite early and finds himself in heaven. However, upon his entry to heaven, he realizes he left so much undone, and he feels that he has to go back to earth and have them sort. The only way to do that; escape from the afterlife. One question that remains in the mind of many is whether this might have been a foreshadow of what The Rev would face later on in his death that resulted from a drug overdose.

“Nightmare” is one album-titled song that has proved worthwhile listing on the best Avenged Sevenfold songs. Written by M. Shadows, “Nightmare” was the first single released by the band without former drummer The Rev. Vocalist M. Shadows revealed that the song’s inspiration came on his wedding day, which had him detour the studio to hash out a demo. The song is about a person who is damned for wrongdoing on earth. “Nightmare” takes you on a dark journey having it delivered from the viewpoint of a hell’s resident. The song peaked at number fifty-one on the Billboard Hot 100 Chart.

“Hail to the King” is the title track and lead single for the band’s sixth album. The band rose from the emotional heaviness from the previous album that had them deal with the loss of one of them. The song would mark Avenged Sevenfold’s first release with their new drummer Arin Ilejay. “Hail to the King” gained quite a positive reception having it used as an official theme song for WrestleMania 32. The song peaked at number eighty-three on the Billboard Hot 100 Chart.

Number one on our top 10 Avenged Sevenfold songs is “So Far Away” from the band’s album Nightmare. Written by guitarist Synyster Gates, the song serves as a tribute to the former band’s drummer The Rev, who passed on December 2009. The song is instrumentally and lyrically credited to Gates with the acoustic guitar from the song from his father. In most concerts, the song is performed with the audience holding up their lighters or cell phones as Avenged Sevenfold feature a banner commemorating Rev’s legacy.