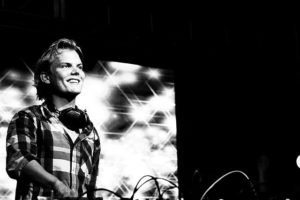 Our Top 10 Avicii Songs looks at ten of the best Avicii Songs from an artist who served as an inspiration for many in the EDM field of music. Avicii whose real name is Tim Bergling was born in Stockholm, Sweden in the late 1980s. He passed away at a very young age due to health issues. During his short life he a had a major impact on dance and electronic music as he became a pioneer in crossing multiple musical genres in creating masterful productions of captivating dance and electronic music. There are so many great pieces to present. We hope the ten Avicii songs we have chosen below will turn you onto one of the great musical artists of the 21st century.

We open up our top 10 Avicii songs list with the fabulous songs “Fade Into Darkness,” and “Collide.” Both songs use very similar musical tracks for what would become two very different songs. This is pretty interesting. The song “Collide,” featured the vocals of the fabulous Leona Lewis. The song “Fade Into Darkness,” featured the vocals of Andreas Moe. This is just a very cool way to open up this list of great Avicii songs.

Continuing with our top 10 Avicii songs list we take a listen to the energetic song entitled “I Could Be the One.”  The song was released as a non-album single. Lead vocals on the track were performed by Noonie Bao. The song was a number one hit on the US US Bubbling Under Hot 100 Singles Charts. The song also broke onto the US Billboard Dance Charts peaking at number one. It hit number one on both the UK Singles charts and the UK Dance charts. The song was composed by Nick Rotteveel, Arash Pournouri, Tim Bergling, Linus Wiklund and Jonnali Parmenius.

In the number eight spot on our top 10 Avicii songs list we present the breathtaking song entitled “SOS.” From the five star production, the originality, the melody, the lyrics and golden vocals of Aloe Blacc this is just an exceptional song. The song was released on the album entitled Tim. The album was released in 2017. It was the first single released from the album. The song broke onto the US Billboard Dance Charts peaking at number one. It wasn’t just on the US Dance Charts where it hit number one, it also hit number one in multiple countries dance charts around the world including Australia, Belgium, Croatia, Czech Republic, Finland,Germany, and The Netherlands.

In the number seven position on our top 10 Avicii songs list is this pulsating song entitled “You Make Me.” This one is on fire baby. That piano riff is “all killer, no filler” to quote the great Jerry Lee Lewis. The song featured the lead vocals of Salem Al Fakir. The song  “You Make Me,”was released on the album entitled True. The album was released in 2013. Music fans in Sweden loved this one because they made it a number one single in Sweden. The song was also a number one hit on the United Kingdom Dance Charts.

Landing in the number six spot on our top 10 Avicii songs list we present the song  Levels. This song uses a sample of the great jazz vocalist Etta James taken from the recording “Something’s Got a Hold on Me.” It is done so well. Its sounds like she was in the room recording with Avicii. The song was released as a non album single. “Levels,” went straight to number one on the US Billboard Dance Club Songs Charts as well as the United Kingdom Dance Charts. The song also hit number one in the Netherlands, Hungry, Norway, Sweden and Slovakia. The song was a hit on the Australian Music Charts peaking at number twenty four. Songwriting credits for the song “Levels,” was given to Tim Bergling (Avicii), Arash Pournouri, Leroy Kirkland and Etta James.

At the halfway point on our top 10 Avicii songs list is the mesmerising song entitled “Addicted To You.” This one is just stunning! It was sung by a brilliant singer named Audra Mae who sounds very similar to Adele.The song was issued on the album entitled True. The album was released in 2013. It was the fourth single released from this fantastic album. “Addicted To You,” was another mega-hit for Avicii around the world. The song hit number one in the countries of the Czech Republic, Slovenia, Poland, Hungary and Germany.

In the United States the song was a number one hit on the US Billboard US Dance Club Songs Charts. It was also a top ten hit in the countries of Australia, Austria, Belgium, Italy, the Netherlands, New Zealand, Switzerland, Slovakia and the Ukraine.  In the United Kingdom the song hit number fourteen. The song was composed by Avicii, Arash Pournouri, Mac Davis and Josh Krajcik.

At the number four spot on our top 10 Avicii songs list we present the song entitled “Hey Brother.” We love the guitar riff at the start of the song and the strings that dance around the melody throughout the entire song. It’s so cool to hear how folk music was mixed with EDM and sounded so good. This was just the work of a musical genius.  The song was released on the album entitled True. The album was released in 2013.  It was the third single released from the album.

“Hey Brother,” hit number one in Austria, Belgium, the Czech Republic, Finland, France, hungry, Italy, the Netherlands, Norway, Poland, Scotland, Slovakia, Slovenia, Spain, Sweden, Switzerland, in the Ukraine. The song “Hey Brother,” hit  number two on the Australian music charts as well as number two in Denmark, Ireland, South Africa and in the United Kingdom. The song was a hit on the US Billboard Hot 100 peaking at number sixteen.

In the number three spot on our top 10 Avicii songs list we present the song entitled “The Nights.” The song’s haunting opening statement about wanting to be remembered  for the life he lived is so beautiful and yet so sad for obvious reasons. The world lost a brilliant artist when Tim Bergling passed away. The song was written by Avicii in tribute to his father, but instead it becomes a tribute to him. Let forget about all the chart info on this one and just listen to the song and enjoy the video in tribute to this young man who left us way to soon.

Just of the number one spot on our top 10 Avicii songs list we rejoice with the jubilant song entitled “Waiting for Love.” We love that dynamic piano introduction to this stunning song. “Waiting for Love,” was released on the album entitled Stories. The album was released in 2015. The song “Waiting For Love,” featured vocals and lyrics by Simon Aldred. It was the first single released from the album. This was another smash hit for Avicii. “Waiting for Love,” went all the way to number one in Austria, Hungary, Norway and Sweden. The song was a hit on the US Billboard Bubbling Under Hot 100 peaking at number ten. The song also was a hit on the US Billboard Hot Dance/Electronic Songs reaching all the way up to number seven. In the United Kingdom the song hit number six.

We close out our top 10 Avicii songs list with the groundbreaking song entitled “Wake Me Up.” The phenomenal song “Wake Me Up,” was released on the album entitled True. The album was released in 2012. It was the first single released from the album. “Wake Me Up,” featured vocalist Aloe Blacc. The song was one of the biggest hits singles of the past 20 years. It was a number one single in the countries of Sweden, Austrailar, Austria, Belgium, France, Germany, The Netherlands and many more. In the United Kingdom the song also hit number one. It was also a hit on the US Billboard Hot 100 peaking at number four. However it did hit number one on the US Billboard Mainstream Top 40 charts as well as number one on the US Billboard Hot Dance/Electronic Songs and Dance Club Songs Charts.  The song “Wake Me Up,” was composed by Egbert Nathaniel Dawkins III (Aloe Blacc), Tim “Avicii” Bergling and Mike Einziger.