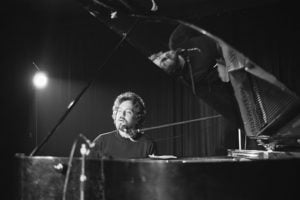 Our 10 Most Rocking Billy Joel Songs looks back at the career of one of the most loved singer songwriters of all time and picks out ten of his hardest rocking tunes. Billy Joel has not always been given credit for his rock and roll heart because he has had so much success with ballads and pop radios hits. However, as any hardcore Billy Joel fan knows, Billy Joel was heavily inspired by The Beatles, Rolling Stones, Cream and many other rocking 1960s groups. The first band he played in as a very young man called the Hassles were a rocking psychedelic group from the 1960s that recorded some pretty heavy stuff that is very interesting to listen too. In concert, the man rocks hard frequently through the night giving fans a total rock and roll experience in between the much loved ballads. We thought it would be fun to pick out ten of our favorite most rocking Billy Joel songs and present then in an article. So here we go…..

We open up our 10 Most Rocking Billy Joel Songs songs list with the guitar oriented song entitled “A Matter Of Trust.” This one made the most sense to open this list with because the song was written as a guitar oriented song in which even in the video Billy Joel is front and center playing guitar instead of piano. It was a very cool look and the only time a video featured Billy Joel playing guitar. Half of The Beatles also appeared in the video as both Ringo Starr and Paul McCartney appear in a couple of shots. The song was released on the album entitled The Bridge. It was the lead single released from the album. The album was released in 1986. The song was a hit on the US Billboard Hot 100 peaking at number ten.

Continuing with our 10 Most Rocking Billy Joel Songs list we take a listen to another guitar oriented song entitled “You May Be Right.” This killer tune opened up with a smoking guitar riff that signaled a new direction for Billy Joel in 1980 as the new wave scene had taken over fm radio. The song was released on the album entitled Glass Houses. The album was released in 1980. It was the first single released from the album in the US. “All for Leyna,” was the first single released in the UK. The song was a hit on the US Billboard Hot 100 peaking at number seven.

In the number eight spot on our 10 Most Rocking Billy Joel Songs list we present the  heavy blues rock song entitled  “That’s Not Her Style.” This one had it all, a great heavy drum sound, blues harmonica, horns blaring and a fabulous chorus from out of the Stax music period of the 1960s. This is probably one of Billy Joel’s most underrated songs. The song was released on the album entitled Storm Front. The album was released in 1989. It was the fifth out of seven singles released from the album. Billy Joel wrote the song about his wife at the time Christie Brinkley. The song broke onto the US Billboard Hot 100 peaking at number seventy.

In the number seven position on our 10 Most Rocking Billy Joel Songs list is the song entitled  “A Room Of Our Own.” If you ever want to make the argument that Billy Joel was inspired by The Beatles, just play them this song. In fact play them the entire Nylon Curtain album as this was the album that Billy Joel called his Sgt. Pepper. It’s such a  phenomenal album. It’s our favorite Billy Joel album Listening back to this record it just makes us which that Billy Joel had continued releasing new music instead of retiring from the studio in 1993. The man is just so brilliant.

Landing in the number six spot on our 10 Most Rocking Billy Joel Songs list we present the song “Easy Money.” Billy Joel does his best impression of James Brown and Wilson Pickett on this throwback to the great r&b rock and roll style of the 1960s. The riff on this one is so memorable. Billy Joel delivers one of his most rocking and soulful vocals ever on this track. The horn section is to die for as well as the great backing vocals. Talk about an artist on fire. The song was released on the album entitled An Innocent Man. It was a tribute album to all the styles of music that inspired Billy Joel  as a musician and songwriter. We played this album to death in 1983. A real gem.

At the halfway point on our 10 Most Rocking Billy Joel Songs list is the raging song entitled “All For Leyna.” This has always been one of our favourite Billy Joel songs since the first time we heard it. The piano part wraps around Billy Joel’s desperate vocals in perfect tandem. We have all been through it. The song was issued on the album entitled Glass Houses. It was a top 40 hit in the United Kingdom.

At the number four spot on our 10 Most Rocking Billy Joel Songs list we present another angry Billy Joel song entitled “Laura.” This is probably our favorite Billy Joel song of all time. This is so Beatles inspired but he does it within his own voice that makes it all his own. This one is powerful, The harmonies are spectacular. Phil Ramone does an amazing job on the production. We never get tired of listening to this one. The song was released on the album entitled The Nylon Curtain. The album was released in 1982.

Rocking along on our 10 Most Rocking Billy Joel Songs list we present the legendary song entitled “Only The Good Die Young.” The song was released on the album entitled The Stranger. The album was released in 1977. While Billy Joel was already a very popular artist because of his success with “Piano Man,” and the great Turnstiles and Streetlife Serenade albums, it was the Stranger album that turned him into a superstar.The album was filled with so many hits, but a big time fan favorite has always been one of the album’s most rocking songs entitled “Only The Good Die Young.” This has and always will remain one of his most loved songs of all time.

This one starts out like the theme song from and old western movie and then suddenly blasts off to sound like the theme songs from a newer western movie. This is Billy Joel showing off his piano chops in this rocking cinematic adventure of a song that shows how much music was inspired by television and movies of the 1960s. “The Ballad Of Billy The Kid,” has always been one of the most exciting Billy Joel pieces ever released. It rocks hard and carries the listener away on a musical escapade that never gets boring  The song was released on the album entitled  Piano Man. The album was released in 1973.

Both amature and professional piano players love playing the music of Billy Joel for obvious reason. However, two of the most challenging Billy Joel pieces have always been his classic ragtime composition “Root Beer Rag and the thunderous energetic piece “Prelude/Angry Young Man.” This has always been one of the most intense and rocking songs Billy Joel has ever released. It’s as exciting as it gets as both a player and a fan, It’s so tough to play and because it requires so much energy to did it, Billy Joel usually performs it early in his concerts while he is still pumped up and fresh. The song was originally released on the Turnstiles album. It would become a concert favorite for many years.