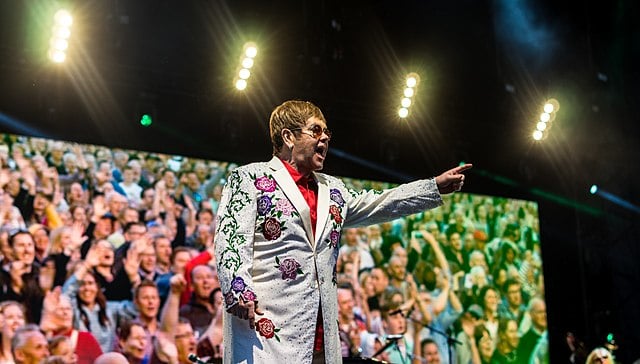 From 1970 to 1977, Elton John released a series of incredible rock and roll pop music albums filled with non stop top charting hits and deep tracks. On every album, Elton John released a handful of amazing singles that instantly became part of pop culture. Each one of his studio albums would have served as a greatest hits package for today’s pop artist. Albums like Madman Across the Water

, Don’t Shoot Me I’m Only the Piano Player

and Captain Fantastic and the Brown Dirt Cowboy

were masterpieces of pop perfection. It was incredible how many great songs Elton John and his songwriting partner Bernie Taupin released in a seven year period. It was like Christmas morning every time Elton John released a new album. The excitement was overwhelming as to what to expect to hear . One was never disappointed one was always blown away.

Like The Beatles, Elton John also released singles in between the albums. Many of these singles never appeared on the original records. Of course, during the CD era they were added to the original albums. Nonetheless, in the 1970s if you wanted those songs you had to buy the 45 rpm 7 inch records. This article will take a look at the singles Elton John released that were not included on any albums. These are non-album track singles that eventually found their way to greatest hits packages. These are not non-album B sides, these are the A sides.

We open up our 10 Elton John non-album track singles list with perhaps the rarest of them all. Even hard core Elton John fans do not know this one. It was not a big hit single or anything like that. It was simply a song written for charity in his native home of England. It’s almost comical when you hear him singing the lyrics he does, but then he hits that chorus and it’s pure Elton John. There’s is a bit of “Ticking,” in this one just before he heads into the chorus, but he erases the similarity by going to a major chord instead of a minor chord like he did in“Ticking.”

Elton John and Bernie Taupin’s song “Don’t Go Breaking My Heart,” was a huge hit single for the pair. The song was recorded as a duet between Elton John and Kiki Dee. The song hit number one on the Billboard top 100 in 1976. It ended the year as the second biggest song of 1976 on the Billboard Hot 100 finishing second to Paul McCartney and Wings “Silly Love Songs.”

“Ego,” was one of the last great Elton John non-album track singles released in the 1970s. The song was released just before the album A Single Man

in 1978. “Ego,” represented a change in Elton John’s sound and pretty much the end of what many Elton John fans defined as his golden era.

One of rock and roll’s great Christmas songs was written by Elton John and Bernie Taupin in 1973. “Step Into Christmas,” was a standalone single and non-album track that paid tribute to the classic Phil Spector sound of the 1960s.

Elton John’s non-album single “Rock and Roll Madonna,” was released in the United Kingdom in 1970. It would be eventually released twenty two years later on the CD compilation Rare Masters

. It was also issued on the remastered edition of the 1970 Elton John

. It did not appear on the record but eventually made its way onto the 1995 Empty Sky

CD remaster. The song was also covered by Three Dog Night in 1969.

Not many bands can cover a song by The Who and turn it into a huge hit like Elton John did. The song’s popularity was also fueled by the appearance of the song in the Motion Picture Tommy

Before Elton John remade The Who’s “Pinball Wizard,” he took on a son from the most popular band of all time. Elton John’s version of The Beatles “Lucy In The Sky With Diamonds,” landed the singer another number one hit. Hands down it’s the best cover version of any Beatles song ever done.

Elton John’s “Philadelphia Freedom,” was simply a masterpiece in pop music. The song was written during the Captain Fantastic and the Brown Dirt Cowboy recording sessions. This was Elton John’s greatest artistic time period in his career. “Philadelphia Freedom,” went to number one on the U.S. Billboard Hot 100. The single went platinum becoming one of Elton John’s most successful commercial singles. In 2019, it still sounds as fresh as it did in 1975.