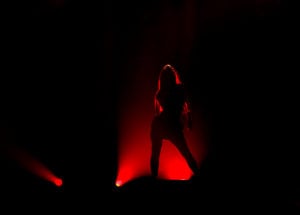 Often, people tend to think that Divinyls were a one hit wonder. This is largely due to their song, “I Touch Myself,” which became a hit in the US. However, the band made great music for more than a decade and they are undoubtedly one of the best rock bands to ever come from Australia. Divinyls have been a mainstay in the Australian music scene since 1980 and primarily consisted of Chrissy Amphlett and Mark McEntee. The band were initially considered to be a hard rock band, with Chrissy Amphlett being regarded by many fans as the female Angus Young due to her stage presence and mannerisms during her performances in the early 1980s. However, the band’s image transformed after their second studio album, What a Life!, which saw the band leaning towards pop music style. We have compiled a list of ten cracking songs from Divinyls that you will absolutely love. Here are the top ten songs from The Divinyls.

Starting us off in tenth position is a track from the band’s 1983 debut album, Desperate. The track, which features great interplay between the bass and drums is a great listen. The vocal performance of the track is amazing although the track was not inventive enough to warrant a higher position on our list of the top ten Divinyl songs. “Science Fiction” was used as a soundtrack for the 1982 Australia film, Monkey Grip and it peaked at position 13 on the Australian Kent Music Report SIngles Chart.

The iconic opening line of this classic song goes like, “Hey little boy, You don’t have to hide nothing no more.” From the first instance you hear those lines, Chrissy Amphlett’s voice will immediately capture your attention and probably scare you a tad. “Hey Little Boy” was a common song in Sydney’s party scene during the late 80’s to early 90s and was Divinyl’s first charting single. The track, which appears as the second song from their 1988 album, Temperamental is a blistering stomper that will blast your speakers out.

The Divinyls 1983 studio album, Desperate contained one of the band’s most famous hits in the USA. “I Touch Myself,” which is the lead song from the album, was a modern rock smash hit that was accompanied by an equally eye-catching video that featured Chrissy Amphlett. The excellent pop song was about women exploring their female sexual anatomy. Although it was by far not their best song, “I Touch Myself” was a worldwide hit that sparked conversations. The track was certified platinum in Australia and the song’s video was nominated for three MTV Video Music Awards in 1991 including a nomination for Video of the Year.

Unlike most of their other songs, Chrissy doesn’t sing the first verse and chorus in this one. “Siren” is the fifth track from the band’s debut album, Desperate. The song features Bjarne Ohlin, the band’s rhythm guitarist on the vocals. The track was a big hit for the band, showing that their strength lies in the vocals. If you want to introduce a friend to this band, “Siren” is probably the best song that would impress anyone listening to this band for their first time. The track peaked at position 45 on the Australian Singles Chart and is one of my favorite songs from the Divinyls.

The Divinyls’ 1985 album, What a Life! Proved to be more pop and more polished than their debut album, Desperate. At the heart of it was the track, “Heart Telegraph” which showcased Chrissy Amphlett’s unique vocal delivery and Mark McEntee’s excellent grungy guitar work. Although the song writing in the whole album was not as great, “Heart Telegraph” seemed to be an exception. The track was quite engaging and is one of the most memorable songs from the album.

Coming in at position five is an emotional song that will demand repeat listening. The song “Good Die Young” is lifted from the band’s 1984 album, What a Life! And is one of the most commercially successful tracks from the album. The track features a music video that was shot in several locations across Sydney. The track peaked at position 32 on the Australian Singles Chart and is a song that should have become more famous around the world.

Although this track did not achieve quite the same success as “Pleasure and Pain,” “Sleeping Beauty” was nonetheless a great Divinyl song. The song is quite a great listen and even if you don’t listen to most of the other songs in our list, you should definitely listen to this one.

“Only Lonely” is the second track from Divinyls debut studio album, Desperate. The track was also one of several other tracks released as the soundtrack for the 1982 movie, Monkey Grip. The track features some impressive blazing guitars and a rhythm section that is quite thumping. Chrissy Amphlett’s vocals in this track are mesmerizing to say the least, making this track, one of the best Australian songs ever.

The image of Chrissy Amphlett holding a lit neon tube as she sang out her way through this track has remained an iconic moment in the Australian music scene. And “Boys In Town” was the perfect track that summed up Divinyls as a band. The track, which was the first that Christina and McEntee had written together, was a commercial success, peaking at position eight on the Australian Singles Chart.

Since the band’s inception, Chrissy Amphlett had worked on painting herself as a masochist and in this song, her masochist image that had been carefully crafted over the years comes out clearly. The track is about a lady who is constantly hurt by someone she really loves. “Pleasure and Pain” became an iconic song for the band and it was the band’s first song to chart in the USA. The lyrics of the song, which were written by Mike Chapman are quite intense at some point with heavy lines such as, “Break my body with the back of your hand, Doesn’t make sense from where I stand.” Chrissy Amphlett’s titanic voice is quite incredible and it gives me goosebumps every time I listen to this song. The song was commercial success for the band, peaking at position 11 on the Australian Singles Charts and was also ranked position 43 on Triple M’s “Ozzest 100” for the most Australian songs of all time.

Top 10 Songs From The Divinyls article published on Classic RockHistory.com© 2021