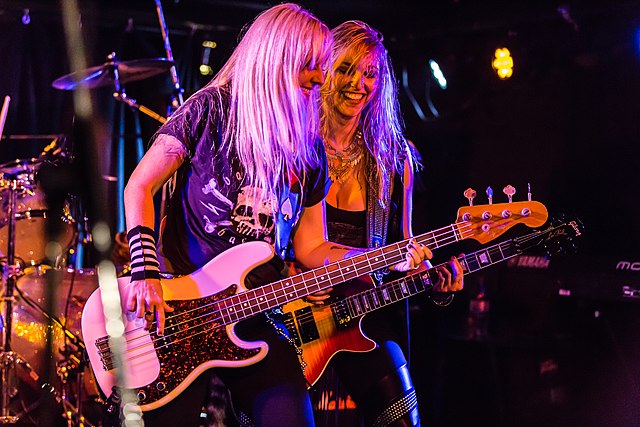 Our 10 Best Vixen Songs Of All Time list looks at the songs of an all female heavy rock band from Saint Paul, Minnesota,that was formed in the 1980s.The band hit the big time when they were signed to a major label and released their first album in 1988 entitled Vixen. The band is one of just a handful of all female bands like The Runaways and Girls school that focused on hard rock instead of the pop material most female acts in history had been formed around. Vixen has released four studio albums. Most of the songs on this list stem from the band’s first three and especially the first two.

Continuing with our Vixen songs list we turn to the smoking song “Never Say Never,” which has nothing to do with the James Bond film. The song was released on the band’s third album entuited Tangerine. The album was released in 1998 ten years after their debut album was released. The band at the time of their third album consisted of Janet Gardner on killer lead vocals and some stunning rhythm guitar, Gina Stile lighting it up on lead guitar, and Roxy Petrucci  pounding away on the drums. Studio musician Mike Pisculli  played bass on the album.

In the number eight spot on our Vixen songs list is the great song “Streets in Paradise.” The song was written by Jan Kuehnemund, Jack Conrad and Steve Plunkett. The song appeared on the band’s second album entitled Rev It Up. The song also appeared in an episode of Beverly Hills, 90210 in 1991 in an episode entitled “Slumber Party.”

At number seven on this fun Vixen songs list we present the song “Runnin.” The track appeared on the soundtrack to the motion picture Hardbodies which was not one of the best films of the 1980s. The movie poster was probably the most impressive aspect of the film.

The Vixen song “How Much Love,” was an exceptional rock and roll song that appeared on the band’s fantastic second album entitled Rev It Up. The song was written by Jan Kuehnemund, Jack Conrad and Steve Plunkett. “How Much Love,” was the album’s lead single. It was a huge hit for the band. The song would become the band’s most successful song on the music charts as it reached higher than any of their other songs.  The song peaked at number eleven on the United States Billboard Mainstream Rock Tracks Charts. The song also hit the number forty four spot on the US Billboard Hot 100. It was also a big hit in the United Kingdom where it was a top 40 hit on the United Kingdom Music Charts.

At the halfway point on our 10 Best Vixen Songs Of All Time list we present the song “Not A Minute Too Soon.” The song was released on the group’s Rev It Up album. It was released as the third single from the album. While it failed to break into any of the United States music charts, it did become a hit in the United Kingdom peaking in the number thirty seven spot on the UK Music Charts.

This wonderful Vixen song “Love Is A Killer,” was a standout metal ballad released on their Rev It Up album. We have included the rare video for the song here. The song was released as the second single from the Rev It Up album. It is the last Vixen song to chart on the US Billboard Music charts. The song was written by Roxy Petrucci and Harry Paress. The musicians in Vixen at the time of their second album included Janet Gardner on lead vocals and rhythm guitar, Jan Kuehnemund on lead guitar and backing vocals, Share Pedersen on bass and backing vocals and Roxy Petrucci on drums and backing vocals.

As we get close to the number one spot on our Vixen songs list, we turn to the band’s first album for the final two spots. In the number two spot is the heartbreaking song “Cryin’.”With its pulsating keyboard riff and slamming groove this was one killer song. Janet Gardner is simply fabulous on the song’s lead vocals. Man could she sing.  The song was released as the second single from the band’s debut album. The song was written by Gregg Tripp and Jeff Paris. On their debut album, Vixen consisted of Janet Gardner, Jan Kuehnemund, Share Pedersen and Roxy Petrucci.

We close out our Vixen songs list with the band’s most popular song entitled “Edge Of A Broken Heart.” The song was released as the lead single from the band’s debut album entitled Vixen. This is metal pop 1980s style in the same vein as bands like Bon Jovi and many others. So many of those hit 80s pop metal songs were written by well established writers outside of the bands that performed the songs. This was true with the song “Edge Of A Broken Heart,” as it was written by Richard Marx and Fee Waybill of the Tubes.