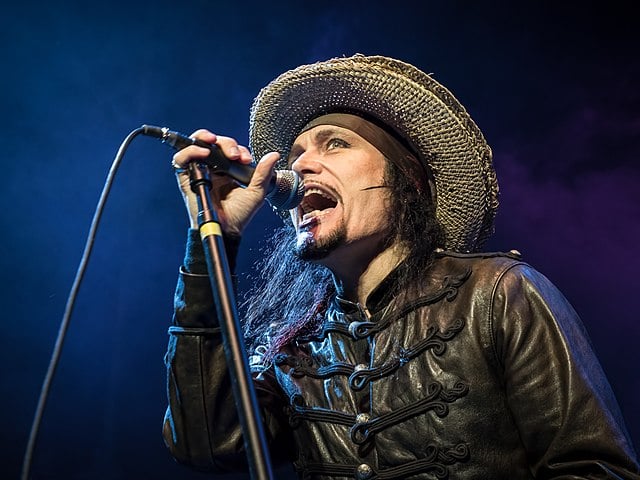 Our Adam Ant & Adam Albums Ranked list looks at the career of Adam Ant and his band Adam and the Ants. Since Adam and the Ants only released three studio albums we thought we would combine the Adam and the Ants catalog with some Adam Ants solo records. Adam and the Ants hail from the city of London in England. The group was formed in 1977. Originally known as just the Ants, the band would soon take on the name Adam and the Ants as Adam Ant was just pretty much the focal point of the band. The original lineup of the band consisted of Dave Barbosa Matthew Ashland and Leigh Gorman. However many members of the band left Adam Ant to form their own band called Bow Wow Wow. Adam Ant got together with a great guitarist known as Marco Peroni. This brilliant guitarist would spend many years with Adam Ant as one of his co-songwriters and lead guitarist. The two men would be very successful together although Peroni always stood in the shadows of Adam Ant at least from a popularity perspective.

Adam Ant along with David Barbosa, Matthew Ashman, Andrew Warren and some help from Marco Peroni and John Moss recorded the first Adam and the Ants album entitled Dirk Wears White Sox which was released in November of 1979. The band still remained relatively unknown after the Dirk Wears White Sox album was released. However, in 1980 Adam Ant formed a  new Adam and the Ants band with Marco Peroni on electric guitar, Kevin Mooney on bass and Chris Hughes on drums. That band would release the album entitled Kings of the Wild Frontier. Music fans went crazy over this record. There were not many bands that really ever sounded like Adam and the Ants before. It was all in the rhythms’ and the chanting. Adam Ant’s vocals were also very unique in a flamboyant animalistic sort of style. The song Ant Music went viral. Adam and the Ants would follow up their breakthrough album with a third record called Prince Charming in 1981. The third album was also a huge success. It would also be the final Adam and the Ants album.

We open up our Adam and the Ants albums list with Adam Ant’s solo album entitled Wonderful. The album was released in 1995. It was recorded at Abbey Road studios in London. This is amateur record that was filled with wonderful acoustic songs that Adam Ant in fine voice. Standout tracks included “Won’t Take That Talk, Wonderful and Image of Yourself.”

At number eight on our Adam and the Ants albums list is the album Viva Le Rock. The album was released 1985. It was produced by Tony Visconti. The album didn’t do well from a commercial standpoint. It was because of the album failure that Adam Ant begin focusing more on his acting career than his music career at least for the next five years. Still there were some standout tracks including “Vive Le Rock,” “Scorpio Rising,” and the great track “Apollo 9.”

Strip was Adam Ant’s second solo album. The Strip album was released in 1983. The album’s first single entitled “Puss ‘N Boots,” hit number five on the United Kingdom music charts in 1983. The single failed to break into the US Billboard Hot 100. The album’s second single and title track “Strip,” got stuck in the 40s on both the United States and United Kingdom’s music charts.

Dirk Wears White Sox Was Adam and the Ants debut album. The album was released in 1979. This was a fun one, it’s raw but it’s really good. Dirk Wears White Sox hit number one on the United Kingdom Indie album charts. It peaked at number 16 on the United Kingdom album charts. It did not chart in the United States. It’s noted as a punk album, but it’s really filled with more soul and groove and glam then Punk.

The album Adam Ant Is the Blueblack Hussar in Marrying the Gunner’s Daughter Is the most recent Adam Ant album to make this list. This one came out of nowhere. The album was released in 2013. We highly recommend Adam Ant fans picking this one up. It’s a double LP that’s just filled with great new Adam Ant songs including the very cool single “Cool Zombie.”