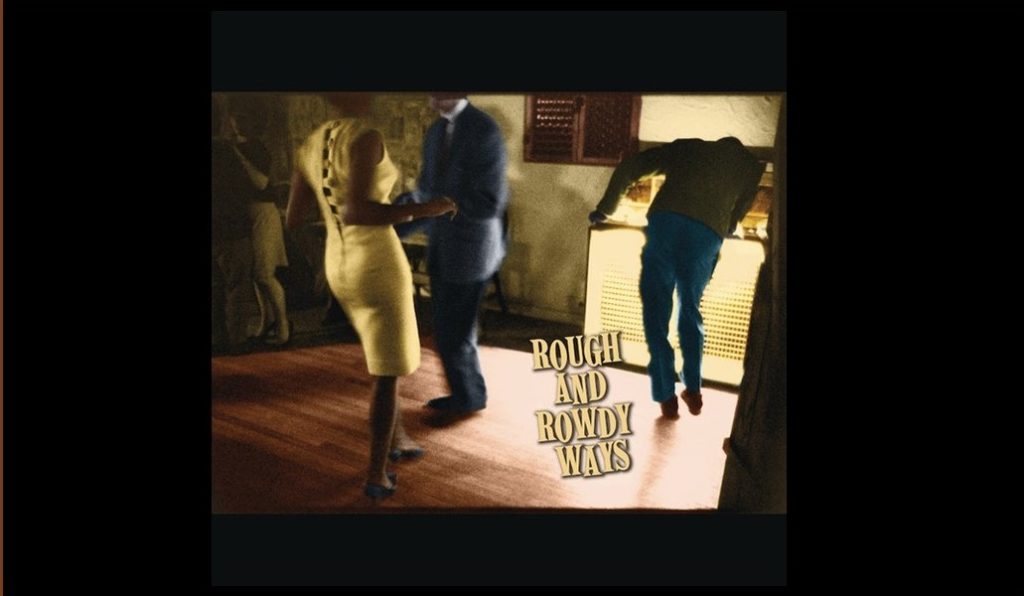 We’ve been listening to Bob Dylan since the 1960’s. We’ve watched him evolve, we’ve deeply loved many of his albums, and then again, there have been those that just didn’t hit the mark. But we loved them anyway. We even watched Renaldo and Clara – right through to the end. Some of us more than once. Even when he’s bad, in some way, he’s good, because he’s Bob Dylan. We rejoiced when he was awarded the Nobel Prize for Literature – to many he is the finest poet of the twentieth century – maybe of all time.

So every new album is awaited with bated breath, and Rough And Rowdy Ways was no exception. After eight years where Bob Dylan has been, to all intents and purposes, silent. He released cover albums, which is a way of speaking through others, but we didn’t get anything new from his own muse. Many of us were not expecting too much. And then along comes Rough And Rowdy Ways.

Initially due for recording in January 2020, finally issued on Juneteenth, 2020, it is eerily foresighted. The songs were written before Covid-19, before Black Lives Matter, and yet they feel as if they were scribbled down in the midst of all this angst and disaster.

While we have all been worrying and stressing and hiding and generally feeling a bit hopeless, Bob Dylan delivers an album which is as beautiful, as subtle, as thought provoking and as all round wonderful as any he has ever given us. He is not, and never has been, the sunny optimist, and Rough And Rowdy Ways ways brims over with images of Armageddon, but it’s also full of pellucid poetry and some great music, from down and dirty rocking blues to sweet cantatas.

Make no mistake, this is the work of a mature, a VERY mature artist. Bob Dylan is, after all, seventy nine years of age. But there is nothing world weary, dull or dusty in this collection of songs which, maybe more than even usual, feel as if they come from the heart. The opening words of the first track of the first disc, “I Contain Multitudes” sets the tone: “Today and tomorrow, And yesterday too The flowers are dying As all things do”

The first track on the second disc, “Murder Most Foul,” is based around the death of Kennedy. This song is set alone on its own disc, is really a recitation to music. Seventeen minutes long, it is unusual in its sound, almost orchestral, almost classical, and is one to continue to muse upon. It’s filled with cultural references to the early 1960’s – a history lesson for new generations.

To put it simply, this album is mournful. Reflections upon death and disaster are everywhere. But it is still the work of a man very much engaged with life, as we can see from the lyrical “Mother of Muses” where Bob Dylan asks for yet more inspiration, and the charm filled song of the south, “Key West (Philosopher Pirate)” which breaths flower laden tropical air. Bob Dylan uses the word bougainvillea in a song!

The songs vary in feel from lightly etched, yearning ballads, to hard hitting rocking blues. But the overall feeling is rather bleak, with many references to death and damage – the feel of the world crashing into the rocks. Don’t let this put you off! This is bleakness woven around with the most delicate and ferocious poetry, along with a mordant sense of humor.

The ethos is firmly rooted in the mid twentieth century with the occasional nod to the nineteenth. Bob Dylan has firmly located himself in a period of time. It’s almost as if nothing happened after 1968.

One of the very best tracks is “Goodbye Jimmy Reed.” This sounds like the Dylan of “Leopard skin Pillbox Hat,” vigorous and alive. Impossible to believe that this is the work of a man approaching eighty years old, and fast! Like all of the tracks, it has something of the feel of a live recording – slightly less than perfect, immediate, vivid. In fact, I kept thinking of The Basement Tapes, many of the tracks having that casual, slung together yet intensely felt sound. As we reach verse three, we find that this becomes a song less about Jimmy Reed, and more about Bob Dylan, and his approach to performing, maybe to life.

“My Own Version” with its mock spooky feel describes Dylan as Frankenstein, making a perfect woman out of body parts which he collects from morgues and monasteries. Monasteries? Well, that’s where you find the often rather gruesome relics of long dead saints. Listen carefully, and it’s actually funny.

For sheer beauty, “I’ve Made Up My Mind To Give Myself To You” takes some beating in the Dylan oeuvre. On the face of it, it’s a tender love song, with an engaging melody. It’s simply beautiful, the voice is so full of tender emotion. But listen closely – is this Bob Dylan singing to God?

Bob Dylan has no patience with “the unlived, meaningless life.” This album reveals more than usual of the complexity of his mind, of his thinking, and it also has the feel of the fairground, or the tattoo parlor, as his mental landscape is revealed to us just a little.

This is truly Bob Dylan at his finest. It’s one of those albums that you play, and as each track comes up, you think, “This is my favorite.” Unlike other offerings, this album is of a perfectly consistent high standard, and would even make a great introduction for someone entirely new to Dylan’s work. For the Dylanologist, you can spend forever chasing down the references, and this is always good fun. My personal take is that there is a lot of religious thought here, and a great deal of reference to 1950’s and 60’ music.

Bob Dylan’s Rough And Rowdy Ways also featured a wealth a great musicians. Charlie Sexton a former rock star in his own right and a member of Bob Dylan’s band since the late 1990s is all over the record. Also appearing from Bob Dylan’s band are Bob Britt on guitar, Donnie Herron on guitars and strings, Tony Garnier on bass and Matt Chamberlain on drums. Long time Tom Petty and The Heartbreakers keyboardist Benmont Tench makes a guest appearances on the record. Additional guest appearances also included the fabulous Fiona Apple, musical artist Blake Mills, legendary keyboardist Alan Pasqua who had played on Bob Dylan’s Street Legal album, and keyboardist Tommy Rhodes.

Rough And Rowdy Ways is a work of art, no question of that. It’s a masterpiece that leaves us astonished at the man’s dark genius, panting for more, and hoping that Bob Dylan will live forever. 2020 has given us a lot of truly horrible things. This beautiful album, released on June 19th 2020, is like a good deed in a very naughty world.

Check out our fun to read Best Dylan songs by decade series:

Why Bob Dylan Won The Nobel Prize In Literature