Deep Purple Come Taste The Band was the only studio album recorded by the Mark IV line up of Deep Purple. It is arguably an often over looked album that should be regarded as a piece of classic rock.

The previous offering Stormbringer had generally been well received, though some Deep Purple fans did not want listen to anything that the group recorded without Ian Gillan on vocals. However lead guitarist and founding member Ritchie Blackmore was unhappy with the musical direction the band was going in and quit after the end of the Stormbringer tour in 1975. Blackmore went on to form Rainbow, and had started recording their debut album before leaving Deep Purple.

Perhaps Blackmore expected the band to break up instead of recruiting another guitarist. Instead, singer David Coverdale and bassist / singer Glen Hughes persuaded drummer Ian Paice and keyboard player John Lord to record another album with a new guitarist. Further more, Coverdale had even found a guitarist; young American Tommy Bolin. The rest of the band were impressed enough to start recording . However things would not go as smoothly as they had done for the recording of both Burn and Stormbringer.

While Coverdale, Lord, and Paice seemed as dedicated as ever, Hughes was having increasing problems with drugs. New recruit Bolin was also a heavy user of drugs, though it would have less of a detrimental impact on Bolin than Hughes while the album was being recorded. 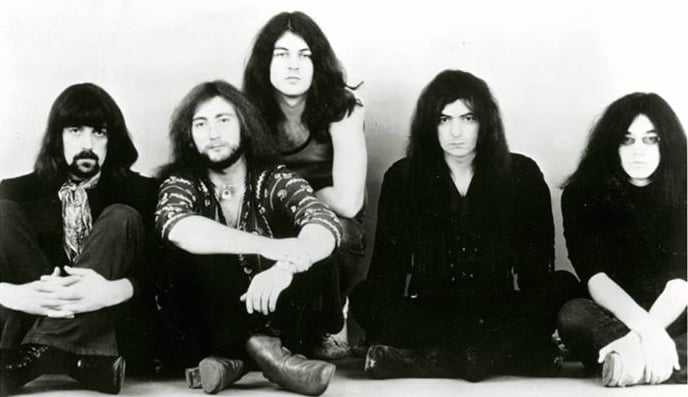 Deep Purple Come Taste The Band continued the trend of giving Deep Purple a slightly more soulful, even funky sound begun with it’s two predecessors. Without a doubt Coverdale and Hughes found it easier to work with Tommy Bolin than Ritchie Blackmore. If the latter did not like Stormbringer then he would almost certainly have disapproved of  Deep Purple Come Taste The Band. David Coverdale and Glen Hughes had a stronger influence on this record, and Bolan had similar ideas on the musical direction the band should go in.

The opening track “Comin’ Home did not strongly hint at the funk and soul influences that were stronger on other songs. It was a high tempo rock number with Bolin adding impetus to it. The vocals of Coverdale are crisp and strong, with heavy bass drumming from Paice, and a pounding bass line from Hughes. Lord provides some catchy notes from his Hammond organ to contrast with the guitar, bass, and drums.

The next track “Lady Luck” is another hard rock number, giving Bolin the opportunity to play a heavier riff. Coverdale’s vocals are again to the fore, with the rest of the band also providing strong performances. It is the kind of track that has the trademark Deep Purple sound for that era.

It is the third track where Deep Purple start to show their funkier side, with Bolin and Hughes especially having a strong say in how this song was recorded and later played live. “Gettin’ Tighter” demonstrates Hughes’ singing at his best, and his ability to write soul inspired tunes. The track shows how versatile Deep Purple were on this album, and their ability to play a variety of differing styles. Bolan played the guitar parts with a real feel for the greater amounts of soul in the track. Lord switches to piano while Paice drums in a subtle way to fit in with the mood of the song. The track “This Time (Owed To Gee),” has a similar structure and feel to it. The strength of the vocals from Hughes did not hint at the drug related problems he was having during the recording sessions for this record.

Tommy Bolan had been recruited to play guitar yet he would have to fill in on bass duties when Hughes was to ill to do so. Bolan played bass on the tracks “Dealer” and “Drifter”. He also provided the backing vocals on these songs as well as “Love Child”. Previously Coverdale and Hughes would take it in turns to sing lead vocals, with the other providing backing vocals.

Then there is the closing number, “You Keep On Moving,” this is a fine finale for the album. Everything fell into place perfectly for this song. The opening chords of the track are slow and quiet before the music gets quicker and the volume starts to rise. The guitar and the keyboard parts compete to dominate the song, showing the skills of both Bolin and Lord off to great affect. The bass and drum parts provide a great backing to the vocals, and the dueling guitar and keyboard. The vocals of Coverdale and Hughes combine excellently. Then there is the guitar solo right at the end of the song, simply stunning playing from Bolin.

In terms of sales the album Deep Purple Come Taste the Band fared well in comparison to Stormbringer, and tickets to the subsequent tour dates sold well. However the band had already decided to call it quits as soon as the tour finished during 1976. Bolin tragically died as a result of a drugs overdose later that same year.

After the split Hughes had severe problems with drugs, restricting the work he did. He worked closely with Gary Moore, and was a member of Black Sabbath. Coverdale went on to form Whitesnake, who Lord and Paice later joined. The Mark II line up of Deep Purple reformed in 1984. The band continues to this day without Blackmore who left in 1993, and Lord who retired and later died in 2012.