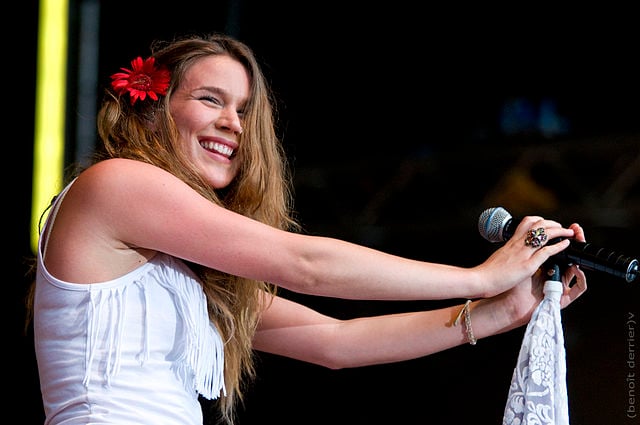 In 2007, Joss Stone released her third album that was entitled Introducing Joss Stone. This album would become an incredible success in the United States. Virgin Records in the US underwent a massive promotional campaign to promote the album and the singer to break her big time. Her record company booked her on every single late night show they could including the David Letterman  and Jay Leno late night shows. She was even booked on the daytime shows with Ellen Degeneres and the morning shows with Kelly and Michael. It was a full tilt promotional campaign that worked very well. Everyone was falling in love with Joss Stone. She had one of the youngest and most soulful female voices that the United States had heard in some time and she had a smile and a personality that was just easy to love. She had more of that girl next door look then the diva type style of a Mariah Carey or the bad girl images of a Britney Spears or Christina Aguilera.

Joss Stone continued to release albums on a consistent basis. In 2009, Joss Stone  released the album Color Me Free. That album was followed up in 2011 with a new album entitled LP1. One year later she released The Soul Sessions Vol 2. It took Joss Stone three years to release her follow-up album to the The Soul Sessions Vol 2 when she released her Water For Your Soul album in 2015.  As of this writing in 2021 herWater For Your Soul album is her most recent studio album. We will update this list as she releases new albums because it seems Joss Stone is an artist who will be around for a long time.

We open up our Joss Stone albums list with her fourth album entitled Color Me free. The album was released in 2009. This was a great album filled with many ballads and special guest appearances by some very popular musical artist including Sheila E, David Sanborn and the legendary guitarist Jeff Beck. Only one single was released from the album entitled “Free Me,” which didn’t do too well on the charts. Nonetheless, this is a great Joss Stone album and a fine place to start on our Joss Stone albums list.

Continuing with our Joss Stone albums list we turn to her grand album The Soul Sessions Vol 2. The album was released on July 20th 2012. This was a spectacular album that was full of legendary songs from the 1960s and 70s and even 80s. We love the version of the Sylvia Robinson “Pillow Talk.” And of course there was the album’s first single “While You’re Out Looking For Sugar,” which was just a phenomenal recording.

Water For Your Soul is the most recent Joss Stone album released. It’s also an album that crossed more musical styles than any of Joss Stone’s previous albums had done before. On the album Joss Stone delivers her typical soul and r&b style while sprinkling in some Latin influences and World music. This is a dynamic album that shows the continued growth of a great young artist.

In 2011 Joss Stone got together with Eurythmics artist and producer Dave Stewart and released a stunning album entitled LP1. If there ever was a producer that knew a little about producing a brilliant female vocal talent it was Dave Stewart. The album spawned three singles entitled “Somehow,” “Karma,” and Don’t Start Lying To Me. The album broke into the Billboard 200 Top 10. Dave Stewart pushed Joss Stone into the world of rock and roll and pop more than she had ever travelled before. And of course she succeeds at the highest level.

In 2003, Joss Stone released her debut album in the United Kingdom entitled The Soul Sessions. It was also released in the United States a few months earlier. The album would just break into the top 40 of the US Billboard Top 200 Albums charts. However, in her native home in England, the album did far better hitting number one on the UK Albums charts and the UK R&B Album charts. The album was fueled by Joss Stone’s soulful cover of the White Stripes song “Fell In Love With A Girl,” which Joss Stone turned into “Fell In Love With A Boy.”

Introducing Joss Stone was the British soul singer’s third album release. This would become Joss Stone’s first really big US album. Introducing Joss Stone debuted at number two on the US Billboard’s Top 200 albums based on a massive promotional campaign to break the singer big time in the US. The album was made for US audiences with its funk grooves, pop melodies and delicious soulful singing by the young artist. Three singles were released from the album including the songs “Tell Me ’bout It,”
“Tell Me What We’re Gonna Do Now” and “Baby Baby Baby.”

We close out our Joss Stone albums ranked list with our favorite Joss Stone album entitled Mind Body & Soul. The album was released on September 15, 2004. Joss Stone co-wrote the majority of the fabulous songs on the album. Mind Body & Soul would become Joss Stone’s first number one album in the United Kingdom.  Joss Stone sang her heart out on this album delivering performances that were as passionate as they were soulful. Four singles were released from the album including the songs “You Had Me,” “Right to Be Wrong,”  “Spoiled” and “Don’t Cha Wanna Ride”