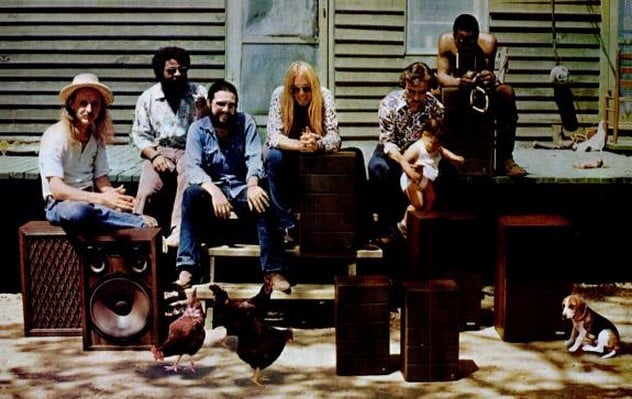 Guitarist and founding member Duane Allman died in 1971. Bassist Berry Oakley passed away in 1972. Despite losing such a major part of the band, The Allman Brothers Band continued on. The Allman Brothers Band released the album Brothers and Sisters in 1973 with Dicky Betts as the band’s sole guitarists. Although the group did uses session guitarists guitarists Les Dudek and Tommy Talton on the record. The band’s sound had changed on Brothers and Sisters. However the album was extremely successful in the wake of the huge single “Ramblin’ Man.”

The Allman Brothers Band broke up in the early 1980s but returned in 1989 with a new guitarist by the name of Warren Haynes and bassist Allen Woody. The new blood revitalized the band and The Allman Brothers Band began a new chapter that would present fans with a string of great new albums and almost otwenty five more years of incredible rock and roll concerts. Dickey Betts began writing some great new material along with Warren Haynes and Gregg Allman. The band released some fantastic new music in the 1990s.

Another new chapter began for The Allman Brothers Band with the addition of Derek Trucks on guitar in 1999. Trucks addition fueled a lineup for the next fifteen years that captured that original Allman Brothers Band spirit in 1969 for a new audiences while old fans went crazy over the bands sound. Dickey Betts had been fired from the band in 1999 and was incredibly missed by many fans. There was much controversy over his firing, but that’s really none of our business. Still, his voice and playing was missed by old school Allman Brothers Band fans.

Our Top 10 Allman Brothers Band Albums list focuses on the band’s entire career with the exception of the late 1970s and early 1980s periods. Those are the albums we left out of our top 10. However they are listed in the article’s album discography at the end..

Where it All Began was the third Allman Brothers Band album released since they had reunited and reformed in 1990. It was a stronger album than Seven Turns and more successful than Shades of Two Worlds. It was also probably the first Allman Brothers Band album that had been eagerly anticipated for by their new fans who just discovered the band in the 90s. The album’s standout track was Warren Haynes song “Soulshine.”

A Revival of the Allman Brothers Band continued with the follow-up album to Seven Turns. The great record Shades of Two Worlds was a much stronger album than Seven Turns. We also like it much better than the album Where It All Begins that was released a few years later. The songs on Shades of Two Worlds  in many ways reflected the early days of The Allman Brothers Band back in the late 60s while sounding very modern in the 1990s. Hence it was obvious what the band meant with the album’s title.

Continuing with our top 10 Allman Brothers Band albums list we turn to the great live album One Way Out. The album was released in 2004. The majority of the material released on the album was recorded in 2003 at New York’s Beacon Theater. The album highlights the brilliant interplay between Derek Trucks and Warren Haynes that made it so special to see The Allman Brothers Band in the 2000s and 2010s. This is such great stuff. In the band at the time was Gregg Allman on Hammond B3 and lead vocals Jaimoe and Butch Trucks on drums,Marc Quinones on congas and percussion, Oteil Burbridge on  and Warren Haynes and Derek Trucks on guitar.

There were a lot of firsts and lasts on this record. It was the first studio album to ever feature Derek Trucks on guitar. It was the only Allman Brothers studio album not to feature Dickey Betts. Sadly it stands as the last Allman Brothers Band studio album ever released. It’s hard to believe that it was some 17 years ago when this record was issued. When thinking back to albums like At Fillmore East,  One Way Out feels like yesterday. Oh how time waits for no one

The Allman Brothers Band released the album Idlewild South in 1970. The band brought in Tom Dowd to produce the record. The album featured the studio version of  “In Memory of Elizabeth Reed” which would become even more legendary on the live At Fillmore East concert album released the following year. Idlewild South was only the second complete album Duane Allman recorded with The Allman Brothers Band. It would also be his final album or at least his final complete album before he died in a motorcycle accident the following year. It’s hard to believe that Duane Allman only recorded two albums with The Allman Brothers Band. Alive for such a short period of time, his talent and persona has lasted forever.

The Allman Brothers Band album and entitled Eat A Peach was a 2 record set that was part studio album and part live album. It’s one of the most popular Allman Brothers Band albums ever released. Some of Dickey Betts greatest material was released on this record including the songs “Blue Sky,” and “Les Brers in A Minor.” Gregg Allman’s classic song “Melissa,” was also included on the record. One of the highlights of the album was the full album side of the 28 minute “Mountain Jam.”

The self titled debut album of the Allman Brothers Band was released in 1969. We believe it still stands as the band’s greatest studio album ever released. We have seven reasons to help us argue that point. They are number one, “Don’t Want You No More,” number two,” It’s Not My Cross To Bear,” number three, “Black Hearted Woman,” number four, “Trouble No More, number five, “Every Hungry Woman,” number six, “Dreams,” number seven and the biggest reason of them all “Whipping Post.” Need more reasons? No you don’t.

All albums listed in chronological order.

Reach for the Sky

Brothers of the Road

An Evening with the Allman Brothers Band: First Set

Where It All Begins

An Evening with the Allman Brothers Band: 2nd Set

Peakin’ at the Beacon