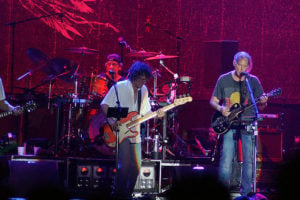 “Heading West,” sounds like it could have been released on the group’s great album Ragged Glory. There’s melody and great chord changes but it’s fueled by Neil Young’s ferocious guitar  playing and his high pitched grungy vocals in the mix. Neil Young paid tribute to his guitar tech Larry Cragg on the Neil Young Archives site. He thanked Larry for “making his guitar sound so alive.” He also mentioned how great it was to be riding with the “Horse again.”

The song “Heading West,” is a personal one for Neil Young. The legendary artist has described the song in being about his mother. It rekindles the time that Neil Young and his mother traveled across the country heading west from Ontario to Winnipeg. It was a time described by Neil Young when his mother was going home to start her life over again and Neil Young was traveling with her. Neil Young writes in the lyrics about his parents splitting up. He remembers his mom fondly within the song. It’s a sensitive one for Neil Young and you can here that passion in his playing and singing all though the track. It’s what separates artists like Neil Young from many of the newest artists who only write songs to become hits and use forualic computer patches or just go by whatever else is selling. Neil Young is still writing genuine music without regard for commercial sales or to fit radio formulas. It’s from the heart, its real and it just sounds so good. Its classic rock for 2021.

“Heading West,” is not the first song to be released from the upcoming Barn album. The beautiful ballad “Song Of The Seasons,” was released two weeks ago. This one sounds completely different from “Heading West.” “Songs Of The Seasons,” sounds like it could have been released on Harvest Moon. It’s one of the strongest songs we have heard from Neil Young in years. Based on what we have heard just from the two released songs, it seems the new album Barn may be very special. Neil Young has continued to release music on a pretty consteinet basis over the years, but there something about this one that feels like he has recaptured that magical spirit and sound of his greatest 70s output.

The album has been titled Barn simply because it was recorded in a …Barn. The album utilized what Neil Young called the Le Mobile Recording Studio. The mobile recording equipment was brought to a barn high in the Colorado Rockies called Studio In The Clouds. It must have been incredibly inspiring. All the songs from the album were recorded live while being filmed by Neil Young’s wife Daryl Hannah. The footage that Daryl Hannah shot will be released as a documentary film called Barn.

The Barn album comes on the heels of the highly anticipated release of next year’s 50th anniversary of  Neil Young’s legendary Harvest album which was released in February of 1972. Neil Young will celebrate the album’s 50th anniversary with a box set containing unreleased songs from the 1972 Harvest sessions It’s hard to believe that those songs have not been released over the past 50 years. Yet, Neil Young had been such prolific songwriter he could afford to just sit on unreleased gems.