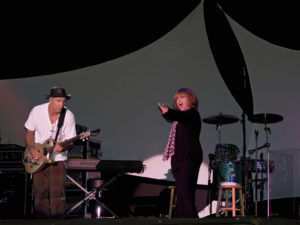 Based on all the comments we have read recently and of course just plain common sense it’s Pat Benatar and Jethro Tull that seem to have the fans and us here at classicrockhistory.com really, really upset this year that these two sensational  rock and roll acts have been ignored after all these years.

The Rock and Roll Hall Of Fame bases a large part of their criteria on nominations based on an artist’s body of work, and impact and influence they had on rock music and pop culture. We think it’s pretty safe to say that if one only has a small knowledge of rock and roll history they would easily see that both Pat Benatar and Jethro Tull nail both of these criteria with flying rock and roll colors times ten.

Pat Benatar should have been put in the Rock and Roll Hall Of Fame years ago based on just the phenomenal career she had as rock and roll performer. Just her vocals skills alone are monumental as a rock and roll singer. Yet, think about when she came up and how she broke so many barriers for female singers in the rock and roll business. Even though the record companies wanted to treat her and promote her like a sex symbol, she ignored those calls and forced the audience and record companies to judge her as a serious rock singer. The fans got it right away.

Pat Benatar did it by simply releasing great rock and roll music and singing her heart out with a voice that was both stunning and thrilling to listen too. We all fell in love her because she had a rock and roll spirit that was captivating. After all these years we are still in love with her. It’s why fans are so upset over her not being in the Rock and Roll Hall Of Fame

Once can’t ignore the success that Pat Benatar achieved early and how it paved the way for future female rock artists to be taken more seriously. Of course she was not alone, artists like Chrissie Hynde, Heart, Joan Jett and of course Patti Smith were also paving the way, but there was something a little extra about the way Pat Benatar was doing it as her popularity in the 80s was off the charts. Pat Benatar made it easier for artists with that rock attitude like Liz Phair, Shirley Manson, Alanis Morissette and so many others to be taken seriously in rock and roll without all the bs.

If we look at the body of work that Pat Benatar released over the years, as that is one of the Rock And Roll Hall Of Fame requirements, it’s simply a no brainer that she’s had a hall of fame career. Her first album entitled In The Heat Of The Night was released in 1979. That record exploded onto the rock and roll scene fueled by the mega hit “Heartbreaker,” that turned everyone’s heads instantly. Its was an extraordinary debut album filled with great tracks like “I Need A Lover,” and “We Live For Love.”

The Heat Of The Night album would start off a string of album releases that would turn Pat Benatar into one of the most popular rock stars of the 1980s. Albums that followed like Crimes Of Passion, Precious Time, Get Nervous, Tropic, Seven The Hard Way and Wide Awake In Dreamland were all monster hits, huge sellers, and spawned hit after hit. Songs like “Hit Me with Your Best Shot,” “Fire and Ice,” “Shadows of the Night,” “Love Is a Battlefield” and “Invincible” became rock and roll anthems of the 80s and beyond. Most of them were all top 10 hits on the Billboard Hot 100. Can you say “body of work,” Rock and Roll Hall Of Fame?

One could not put on MTV without seeing a Pat Benatar video.Women dressed like Pat Benatar, she just didn’t have an influence on music she had an influence on fashion, attitude and image among many women. That is a significant contribution to pop and social culture. Not many artists ever have that much of an impact on culture. We are talking artists like Elvis Presley, The Beatles, Madonna and David Bowie who had that type of an impact on social and pop culture

With her husband and brilliant musical partner Neil Giraldo who should be put in the Hall of Fame right next to her, and her fabulous band, Pat Benatar sold out concerts around the world for a long long time. Truly a legend in classic rock history and the fans who know rock and roll.

Our argument to have Pat Benatar put into the Rock and Roll Hall Of Fame has us pretty much drained already. Yet, we can’t forget to mention one of the other brilliant rock and roll artists that have fans and us included so upset this years. How in the name of every living classic rock and roll fan can the Rock And Roll Hall Of Fame have ignored Jethro Tull all these years?

Alright I have thrown out the morning coffee and I am drinking a Watermelon Hint Water so I can continue this article without having a heart attack.

Groundbreaking, progressive, brilliant, revolutionary, unconventional, the list of adjectives to describe the band Jethro Tull could go on and on. We have had a handful of bands over the years who have blown away rock fans with an original sound that we had never heard before. Jethro Tull was definitely one of them. Arriving on the scene in the late 1960s as Progressive Rock music was beginning to flourish, Jethro Tull took the art of Progressive Rock and made a bit of a left hand turn with their own unique sound.

Progressive Rock featuring the flute up front had really never been done before. In fact, it wasn’t just about the flute being featured, no one had ever played the flute before like the way Ian Anderson played it. Ian Anderson made playing the flute cool for millions of young people at the time although no one could ever play it like Ian Anderson did and no one in rock has ever really tried to. It was just so entertaining and fascinating to listen to Ian Anderson play the flute with that progressive rock and roll voice and incredible songs he was writing. This was a band that was as original as they came

With the talents of Ian Anderson’s singing and flute playing along with his original compositions along with the guitar mastery of Martin Barre and the rest of the very talented group, Jethro Tull would become one of the most loved rock and roll bands of the classic rock era. If you were a rock fan growing up as a teenager in the 1970s, there is no doubt about it, you were also a Jethro Tull fan. Everyone had at least three or four Jethro Tull albums in their collections. Albums like War Child, Aqualung, Minstrel in the Gallery, Songs From The Woods, Benefit and Stand Up were must haves in rock fan’s collection back then. And of course they still are. This is Classic Rock 101.

It’s pretty upsetting that we have to make this argument for Jethro Tull to be inducted into the Rock and Roll Hall Of Fame. It’s really ludicrous that they are not in. You want body of work Hall Of Fame? Okay here you go. From 1968 to 2021, Jethro Tull as a band has released twenty one studio albums, nine live albums, fifteen compilation albums and  thirty three singles. The group has always been one of the most exciting live acts in rock and roll history. They have been groundbreaking, earth shattering, and simply put a major part of classic rock and roll history forever. They are Jethro Tull and they deserve to be in the Rock and Roll Hall of Fame. Are you listening? hello, hello, Mcfkly? Anybody Anybody???? Get it right next year please. The fans are upset, and my blood pressure is rising again….. I can’t continue this…. its too painful………..