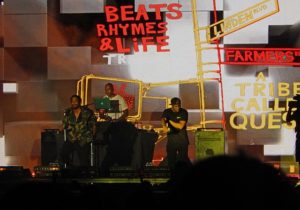 New York City has produced some of the most iconic rappers ever. At the heart of it was a group composed of childhood friends; Q-Tip, MC Phife Dawg, Ali Shaheed Muhammad, and Jarobi White, popularly known as A Tribe Called Quest. Their first project was a hard-hitting, name-making debut album, People’s Instinctive Travels and the Paths of Rhythm. The album, which was met with widespread critical acclaim, featured light-hearted lyrics which explored themes such as safe sex, the life of youths, and vegetarianism. Their sophomore album, The Law End Theory, released in 1991, saw the group revamp their image.

The album stood out for its social commentary and wordplay. Although it was generally received positively by hip-hop fans, it never reached the Top 40 of the US Billboard album charts. In November 1993, the group released its third album, Midnight Marauders, which was a bonafide classic featuring the song “Award Tour,” which became their highest-charting single and helped the album peak at position eight on the US Billboard 200. Although their last three albums didn’t have a similar dynamism and infectious boom-bap rhythms, the group had already left an inextinguishable mark on hip-hop music. This article will look at the top ten A Tribe Called Quest Songs.

The number ten song on our list is narrated by the standout MC, Q-Tip. The track is quite typical to the group and has a playful and engaging narrative accompanied by a frenetic beat. The song features Q-Tip and Ali Shaheed Muhammad, who go on a road trip to El Segundo using Q-Tip’s mum’s car. To enjoy this song, you have to listen carefully to the lyrics and, of course, ensure that you don’t leave your wallet in El Segundo.

The ninth song on our list of the best A Tribe Called Quest songs is a track that contains a sample from Kool and the Gang’s 1971 song, “Who’s Gonna Take the Weight.” Busta Rhymes is also featured in the song’s chorus, where he impresses with some subtle yet hard-hitting verse. The track also contains some fierce and defiant lyrics from Phife Dawg, who goes like, “When’s the last time you heard a funky diabetic?” “Oh My God” is the third song in A Tribe Called Quest’s third studio album, Midnight Marauders.

A Tribe Called Quest’s 1991 album, The Low End Theory, saw the group push the jazz connection a notch higher in the album. “Excursions” is the first song on the album and is the song that set the tone for the rest of this classic album which was Afrocentric and filled with witty lyrics. The song also showcases Q-Tip and Phife Dawg’s incredible flow, which is honed to perfection in the track.

“Can I Kick It?” is one of the most outstanding songs from the group’s debut studio album. The track gave us a clear picture of what we should expect from A Tribe Called Quest. The song kicks off with an unmistakable bassline that features a sample of Lou Reed’s “Walk on the Wild Side.” In the song, Q-Tip and Phife Dawg’s relaxed rhyming is impressive, and the song’s beat is legendary.

The second track from the album, Midnight Marauders, comes in at number six on our list of the top ten A Tribe Called Quest songs. In the track, Q-Tip and Phife Dawg appear to be celebratory for the success they achieved from their sophomore album, The Low End Theory. The song sees the duo team up with Trugoy the Dove of Native Tongues and De La Soul to perform the hook. The song peaked at number one on the US Billboard Hot Dance Music/Maxi-Singles Sales Chart and number 47 on the Billboard Hot 100, making it their highest-charting single.

The number five song on our list of the greatest A Tribe Called Quest songs is arguably one of the greatest rap love songs of all time. Although the track stepped away from the lover man style, it did it seamlessly. The song’s original version was created in 1985 and was one of the group’s first demos. The initial recording of the song, done by Q-Tip, used a conventional rap delivery, but he changed the delivery style to a more conversational delivery.

It’s hard to find a track that perfectly sums up A Tribe Called Quest’s signature mellifluous tone and sampling of music from the likes of the Five Stairsteps, much like this track. The song’s original material was sampled from Pete Rock, and although he is not credited officially, Q-Tip does it in the song’s outro. The song features some slick Phife Dawg lyrics that prove Phife Dawg’s talent. The jazz style theme in the song is terrific, and this track is definitely among the best tracks on the album.

According to Phife Dawg, the beat for this song “Electric Relaxation,” was created while he was in a basement at his grandmother’s house. In this track, Q-Tip and Phife Dawg’s chemistry on the mic comes to the fore, and you can feel how effortless their flow is. Phife Dawg’s lyrics are cheeky, and you can tell that the duo are having a great time rapping. The track also has a prominent bassline was featured as a soundtrack for the American sitcom TV series, The Wayans Bros.

The number two song on our Top 10 A Tribe Called Quest Songs list is the last track from the album, The Low End Theory. And what an ending it was for a classic album. The song featured one of the most iconic posse cuts of all time, and the track ended with a thrilling dry run for Busta Rhymes, whose impressive verse in the song is credited for his big breakout. The song’s popularity led to the release of a remix version of the song, which was included in the B-side of the group’s 1998 album, The Love Movement.

“Check the Rhyme” is the ninth song from A Tribe Called Quest’s second album, The Low End Theory. Although it was quite predictable that this song would rank in the top position, it is also the most sensible choice since it was clearly the icing on the cake for the group’s greatest album. In the song, Q-Tip and Phife Dawg talk about their humble beginning in Queens, with Phife Dawg delivering one of the most inspired verses that prove that he was Q-Tip’s equal.