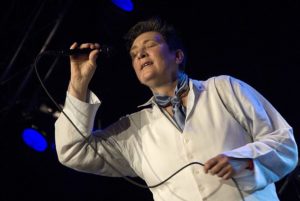 Canadian singer-songwriter, Kathryn Dawn Lang, was first born in Edmonton, Alberta before her family moved two hours east of the city when she was still an infant. As a college student, K.D. Lang idolized the life and music of Patsy Cline, who would serve as a primary influence that would have Lang engage in a music career of her own. In 1982, after graduation from college, Lang moved back into the City of Edmonton where she formed a band that played music revolving around Patsy Cline’s recorded and released material. Lang’s style had her classified as “Canadian Cowpunk” by Rolling Stone Magazine in 1985, which worked for her well enough to receive a number of Canada’s Juno Awards as her professional career as a singer-songwriter continued to show promise.

K.D. Lang’s name reached international fame after performing at the closing ceremonies of the Winter Olympics that were held in Calgary, Alberta, Canada, in 1988. Also in 1988, Canada’s Chatelaine Magazine awarded K.D. Lang Woman of the Year. The popularity of Lang continued to soar as her solo performances, combined with duets with the likes of Roy Orbison, earned her a number of nominations and wins from highly respected music recognition programs such as the Canadian Country Music Association and the Grammy Awards.

In addition to her musical contribution, K.D. Lang also made a number of television appearances, as well as serving as an activist and spokesperson for a number of controversial subjects such as animal rights, human rights, and sexual orientation rights. For Lang, a self-proclaimed vegetarian who struck a nerve with the cattle industry with her “Meat Stinks” campaign she ran during the 1990s, found herself on the receiving end of much criticism as the community Lang originally grew up in is in the heart of Canada’s cattle ranching territory, who saw her stance as an act of betrayal against them.

Whichever fans K.D. Lang lost in one area she gained in another. Lang has not only remained in the spotlight as an activist but as a well-respected performer who deserves credit where credit is due. In total, K.D. Lang has recorded and released twelve studio albums, four compilation albums, a live album, and a soundtrack. She also has forty-one singles credited to her discography.

While the song only appeared on the US Billboard Dance Club Songs chart, it peaked at number one after it was released in 1993. While on its chart, it remained there for thirteen weeks. It was the first time for K.D. Lang to have a single reach the top spot of a US Billboard music chart. It was one of two songs that were featured in the 1993 film, “Even Cowgirls Get the Blues,” as well as part of its soundtrack.

The 2010 Vancouver Winter Olympics version was performed by K.D. Lang before the live crowd during the opening ceremonies. The performance of that song placed second on RPM Canada’s Singles Chart, as well as thirteenth on Australia’s ARIA chart. On the UK Official Singles Chart, it charted at number sixty-one. Originally written and released by Leonard Cohen in 1984, the song has been covered by a number of artists. For Lang, she has performed Hallelujah at a number of events, including the 2017 Tower of Song: A Memorial Tribute to Leonard Cohen concert that was held in Montreal, Quebec, Canada.

“Miss Chatelaine” was nominated in 1994 for Best Female Pop Vocal Performance by the Grammy Awards, but the official win went to “I Will Always Love You” by Whitney Houston. However, in Canada, the song served as a recognition piece to its infamous magazine, Chatelaine. In 1988, Chatelaine Magazine awarded K.D. Lang as Woman of the Year. The album this song belongs to, “Ingenue,” was Lang’s way of paying homage to one of her idols, Lawrence Welk. On the music charts, Miss Chatelaine peaked at number twenty-five on RPM Canada’s Adult Contemporary chart and at number fifty-eight on its Top Singles chart.

The 1989 album, “Absolute Torch and Twang,” earned K.D. Lang a Grammy Award for Best Female Country Vocal Performance during its ceremony in 1990. The song, Full Moon of Love,” served as the leading contributor towards the album’s overall success. On RPM Canada’s Country Music Tracks, the song peaked at number one while on the US Billboard Hot Country Songs chart at number twenty-two.

In 1995, “If I Were You” charted at number one on the US Billboard Dance Club Songs chart, number four on Music Canada’s Adult Contemporary chart, and number twenty-four on RPM Canada’s chart. The song also became a globally charted hit as it peaked as high as number twenty-three in Australia and at number fifty-three on the UK Singles Chart. Coming from the 1995 album, “All You Can Eat,” was the final single coming from K.D. Lang that would appear on top a US Billboard chart, namely with its Dance Club Songs list.

The duet performance of “Moonglow” with Tony Bennett saw a Grammy Award nomination for Best Pop Collaboration with Vocals during its 1995 ceremony, but that win went to Al Green and Lyle Lovett’s “Funny How Time Slips Away” instead. Nevertheless, as this song was still performed by the duo, served its role to earn K.D. Lang and Tony Bennett a 2002 win with the Pollstar Country Music Awards as the Major Tour of the Year. The song itself never appeared on any music charts other than Australia’s ARIA, which was at number sixty-five, but the duo’s performance earned the song modern-day recognition since its original 1933 release, which was sung by Eddie DeLange at the time.

The 2004 Grammy Awards ceremonies nominated “La Vie En Rose” for Best Pop Collaboration with Vocals for the duet performance by Tony Bennett and K.D. Lang, but rewarded Sting and Mary J. Blige instead for “Whenever I Say Your Name instead.” However, this song was instrumental in earning that year’s Grammy for Best Traditional Pop Vocal Album as “A Wonderful World.”

Roy Orbison approached K.D. Lang to perform the duet version of his original 1962 hit, “Crying.” In 1987, the duo’s version peaked at number two on RPM Canada Top Singles chart and number five on its Adult Contemporary chart. On the US Billboard Adult Contemporary, it charted at number twenty-eight, and on the US Billboard Hot Country Songs chart at number forty-two. In 1989, the Grammy Awards recognized the song as Best Country Vocal Collaboration. This single was featured on the 1987 soundtrack, “Hiding Out,” which was a film starring the actor, Jon Cryer.

As a solo artist, “Constant Craving” served as the best song K.D. Lang has ever produced from her entire discographic portfolio. In 1992, the song charted to number two on the Music Canada’s Adult Contemporary chart as well as US Billboard’s Adult Contemporary/Easy Listening chart. On the US Billboard Hot 100, it peaked at number thirty-eight, and on the UK Singles Chart at number fifteen. Constant Craving was K.D. Lang’s most globally recognized hit as it also charted in on Europe’s Eurochart Hot 100 at number forty-six.

The song earned her a Grammy Award in 1993 for Best Female Pop Vocal Performance and was instrumental in her album, “Ingenue,” becoming the best-selling album for Lang. It received Double Platinum certification from Australia’s ARIA, Music Canada, and USA’s RIAA. It became single Platinum with UK’s BPI.