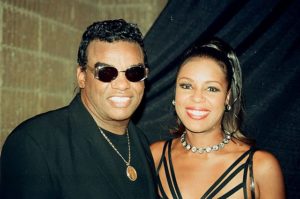 Before officially starting her music career in 1977 as a singing artist, Angela Winbush was born out of St. Louis, Missouri on January 18, 1955. Originally, it was Winbush’s intent to become an architect instead of a singer, even going as far as attending university with aspirations to obtain a degree in that field of study. However, while using her vocal talent as a way to make ends meet, plans changed when the legendary Stevie Wonder took notice of Winbush’s vocal talent and took her under his wing. She became one of his backup singers and relocated to Los Angeles, California. While there, she met with Rene Moore, who’d become the other half of the singing duo, Rene & Angela. Together, they recorded and released four studio albums. The first came out in 1980, simply titled Rene & Angela. The second, Wall to Wall, was released in 1982, and the third, Rise, came out in 1983. Not long after Street Called Desire was released in 1985, Winbush broke away from Moore due to what she later revealed in a 2010 interview had become a violent relationship.

In addition to her vocal talent, Angela Winbush also became an accomplished songwriter. This she credits to Stevie Wonder, whom she regarded as her mentor as he taught her not only how to perform a song as a singer, but successful produce one as a writer. She wrote and produced a series of successful singles that were performed by some of the music industry’s top artists, including Janet Jackson and Stephanie Mills. When Angela Winbush move on as a solo artist, she recorded and released three studio albums. Sharp was released in September 1987, followed by May 1989’s The Real Thing, and her self-titled album in March 1994. There are also two compilation albums to her credit with 2001’s Ultimate Collection being her first and 2003’s Greatest Love Songs being her second. In addition to making a strong mark in the R&B genre, Angela Winbush has also become a prominent performer for her gospel performances as well.

#10 – Lay Your Troubles Down (with Ronald Isley)

In 1990, the single, “Lay Your Troubles Down,” peaked at number ten on the US Billboard Hot R&B/Hip-Hop Songs chart. The song comes from Winbush’s second studio album, The Real Thing. Jazzy with soul, the playout performance between Angela Winbush and Ronald Isley served as an ideal pick-me-up song as both artists brought forth a memorable performance with their rhythmic vocals and sultry play of the saxophone in the background.

#9 – Floatin’ On Your Love (with The Isley Brothers)

With a touch of hip-hop and soft rapping flair, Angela Winbush and The Isley Brothers teamed up to perform “Floatin’ On Your Love,” which served as the leading single from their 1996 album, Mission to Please. It was the twenty-seventh album released by The Isley Brothers and became certified Platinum by the Recording Industry Association of America (RIAA) for having over one million copies of the album sold within the US. The single that had Angela Winbush featured on it, reached number fourteen on the US Billboard Hot R&B/Hip-Hop Songs chart and at number forty-seven on the US Billboard Hot 100. At the time, Angela Winbush and Ronald Isley were married to each other when the song was one of many the two performed together.

In 1994 at number six on the US Billboard Hot R&B/Hip-Hop Songs chart, “Treat U Rite” became the first charted single released from Angela Winbush’s self-titled album. It would be the third and final studio album she would release as a solo artist. The rhythmic mix of Winbush’s melodic voice with a hint of blues not only made this song feel like a dance unto itself between a touch of classic R&B and futuristic hip-hop blended as one.

In 1986, “You Don’t Have to Cry) charted on the US Billboard Hot R&B/Hip-Hop Songs chart at number two. It was the final top ten hit on the chart for the duo, which came from the final album they would record together, Street Called Desire. On the US Billboard Hot 100, the single charted at number seventy-five. Heavy synthesizing blends of keyboard and futuristic-style sounds is what made this song a sultry favorite. The duo performance Moore and Winbush play off each other is as classic as it gets for the R&B genre.

The second hit for Angela Winbush is “Run to Me,” which peaked on the US Billboard Hot R&B/Hip-Hop Songs chart at number four. On the US Billboard Dance Club Songs chart, it peaked at number thirty-two. It would be the second of two hits from the debut album, Sharp, that would realize chart success in 1987. Playful with a dance of a sub-tropic style mixed with an electric keyboarding influence made Run to Me an easy-listening classic that was instrumental in making the generation of 1980s music as popular as it had been.

Coming from the 1985 studio album, Street Called Desire, “I’ll Be Good” was a number four hit on the US Billboard Hot R&B/Hip-Hop Songs chart, as well as a number seven hit on the US Billboard Dance Club Songs chart. On the US Billboard Hot 100, it peaked at number forty-seven. As a classic 1980s disco-style song, I’ll Be Good was among the last great hits that managed to drop hints of older disco styles that came from the late 1970s when the genre had hit its peak. I’ll Be Good would be for the second time the duo would realize a globally successful hit as it also made an appearance on the UK Singles Chart at number twenty-two and on the Dutch Charts at number twenty-one.

On the US Billboard Hot R&B/Hip-Hop Songs chart, “It’s the Real Thing” peaked at number two in 1989. It’s one of the heavier R&B songs Angela Winbush would perform, as well as one of the most playful to dance to. The song comes from her second album, The Real Thing.

In 1985, “Your Smile” was the second and final number-one single Winbush would perform in a duet with Moore before the duo would go their separate ways. Their final album together, Street Called Desire, was certified Gold by the Recording Industry Association of America after it sold 500,000 copies within the United States. On the US Billboard Dance Club Songs chart, the song peaked at number forty-seven, and on the US Billboard Hot 100 at number sixty-two. The duet performance was among the finest Moore and Winbush ever performed together with the sexy, sultry delivery of jazzy vocals that defined what soul music is supposed to be about.

“Angel” was the first single Angela Winbush recorded and released as a solo artist, as well as among the most soulful performances ever delivered by the singer. It comes from her debut album, Sharp, which was released in 1987. Both the song and Angela Winbush’s performance earned her nominations on the 1988 Soul Train Music Award for Best R&B/Soul Single, Female and for its Female Album of the Year. A 2009 edition of Essence Magazine included Angel in their list as one of the twenty-five best slow jam songs of all time. On the US Billboard Hot R&B/Hip-Hop Songs chart, Angel peaked at number one.

“Save Your Love (For #1)” was the first single released from the fourth and final album Rene & Angela would record together. Rich with synthesizing keyboard play, the earliest examples of a rap music style came from Moore as he blends with Winbush’s melodic voice to make this song one of the most popular the duo would ever record together. In 1985, on the US Billboard Hot R&B/Hip-Hop Songs chart, the song charted at the very top. On the US Billboard Dance Club Songs chart, it peaked at number three. It also became an international hit, as it charted as nigh as number seventeen on the Dutch Chart and at number sixty-six on UK Singles Chart.