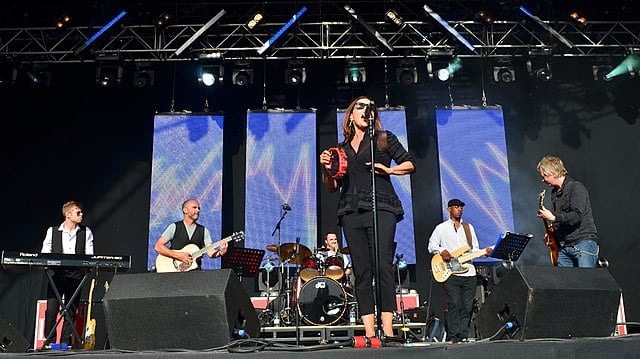 Belinda Carlisle released her first solo album in 1986 entitled Belinda. It was an album that continued in the style of The Go-Go’s with melodies and arrangement clearly inspired by the music of the 1960s. Belinda Carlisle’s follow up album Heaven on Earth displayed a very produced polished sound that was clearly representative of the big sound the 1980s. The album was also filled with brilliantly well written songs. It stands as one of the best albums Belinda Carlisle ever released. Belinda Carlisle would release four more solo albums before reuniting with the Go-Gos in 2001 for the album God Bless The Go-Go’s.

After having moved to France in the mid 2000s, Belinda Carlisle released an album in 2007 entitled Viola. It was an album in which she recorded all the vocals in French.  Ten years later in 2017, Belinda Carlisle would release another album that ignored her American rock and pop roots. The album titled Wilder Shores showcased Belinda Carlisle performing music called Sikh chants in a language called Gurmukhi.

Our Top 10 Belinda Carlisle songs list focuses on the songs she released on her six solo albums that were released during a ten year period between 1986 and 1996. It does not include any songs she recorded with The Go-Go’s or any of the materiel form her non English albums released in the 21st century.

Continuing with our top 10 Belinda Carlisle songs list we turn to the fantastic song “In Too Deep.” The song was released on the album A Woman and a Man. The record was released in 1996. The song was a huge hit in the United Kingdom peaking at number six on the UK music charts. The song was written by Rick Nowels. It was originally released on the Jenny Morris album Salvation Jane a year earlier. However it was Belinda who had the big hit with the song.

I remember picking up Belinda Carlisle’s second solo album Heaven on Earth and instantly being attracted to this great song. It’s just one of those tracks that catches your attention instantly.  The song was released as the third single from the album. The song peaked at number seven on the Billboard Hot 100 making it Belinda Carlisle’s fourth top 10 hit of her solo career.

Speaking of top 10 hits. “I get Weak,” was another great track from Belinda Carlisle’s masterpiece Heaven on Earth album. The song served as the follow up single to “Heaven is a Place on Earth.” It just missed the number one spot on the Billboard Hot 100 peaking at number two. The song was written by Diane Warren who was one of the most successful songwriters in pop music history having composed big time hits for a diverse group of artists such as Dion, Eric Clapton, Roy Orbison, Chicago, Heart, Joan Jett, Aerosmith, Joe Cocker, Rod Stewart  and so many more.

“Leave A Light On,” was released on Belinda Carlisle’s third solo album entitled Runaway Horses. This one has always been one of our favorite Belinda Carlisle songs. Great intro, super verse and a spectacular chorus that you just never get tired of. It’s a big sounding 80s song but it retains that 60s spirit that has always been a hallmark of Belinda Carlisle’s recorded material. And speaking of the 1960s, the biggest surprise on the song was the inclusion of ex-Beatle George Harrison on guitar. Take a listen to his amazing solo………..

“Mad About You,” was Belinda Carlisle’s first big solo hit. The song was released on her debut album titled Belinda in 1986. “Mad about You,” was the first single released from the record. The song reached the Billboard Top 10 peaking at number three. The song was written by Paula Jean Brown, James Whelan and Mitchel Young Evans. This was simply a fabulous song that showcased Belinda Carlisle’s penchant for recording and picking great material to release.

The song Summer Rain is actually quite the opposite of the song Sun both lyrically and musically. This is a cool grooving song that hits you instantly and defines so many of the best attributes of Belinda Carlisle’s art. The brilliant hook, the sleek verses and of curse the “to die for,” vocal performance. It was never a really big hit, but it stands as one of her most underrated songs in our opinion.  “Summer Rain,” was released on the album Runaway Horses. It was issued as the third single from the record. It was a top 30 hit in the U.S. and a top 10 hit in Australia.

We close out our top 10 Belinda Carlisle songs list with a song that stands as the biggest hit of her career. Belinda Carlisle’s single “Heaven Is A Place on Earth,” stands as the singers only number one single. She has a few number two’s both with the Go-Go’s and her own solo career but only one number one. “Heaven Is A Place on Earth,” hit number on because it is simply an amazing songs. From its brilliant lyrics, beautiful melody, soaring chorus and sensational production, its a song that defines perfection in pop music.

Live Your Life Be Free

A Woman and a Man

All album covers are Amazon links and are not stored n the ClassicRockHistory.com server