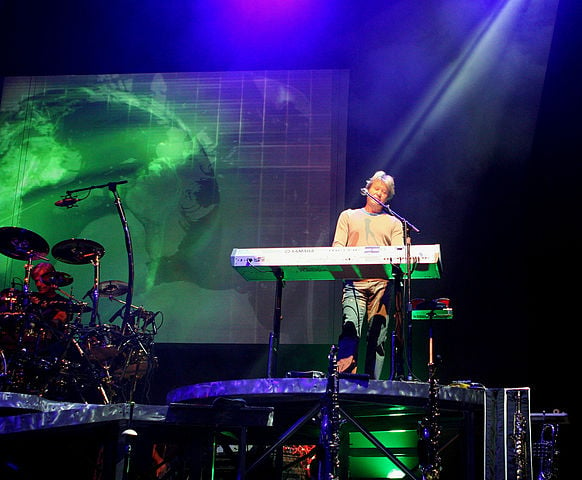 The band Chicago also known as the Chicago Transit Authority during their early years, were one of the most groundbreaking bands of the classic rock era. It was not because they used a horn section in rock and roll music. Horn sections have infiltrated the rock and roll scene since the 1950’s. Just take a listen to some of the great STAX label recordings. The early Chicago albums were groundbreaking because of the band’s use of classical themes, jazz themes, pop themes, string sections and horn sections, all performed by an incredible ensemble of musicians. On top of their musicianship was a group of vocalists that could sing their hearts out.

was released in 1969. From that point on, Chicago released a studio album every year for the entire decade of the 1970’s.  The band also released three live albums in the 1970’s including the famous four record set Live At Carnegie Hall in 1971.

In the 1980’s the band’s sound changed dramatically. However the commercial success continued into the 1980’s. Their 1980’s output featured a more slick pop oriented sound centered around Peter Cetera’s vocal ballads. Many of the band’s big 1980’s hits also featured the metallic sound of the Yamaha DX7 Synthesiser. Many of the old Chicago fans were turned off by the band’s new direction. Nonetheless, the band also discovered a new following of fans as songs like “Hard Habit To Break,” and “Hard To Say I’m Sorry,” dominated FM pop radio.

The band has continued into the 1990’s, 2000’s and 2010’s with long breaks between records and many personal changes. Looking back at the band’s long career, we count twenty-four studio albums and six live albums. With such a massive output of material, there is no way we could do a top 10 Chicago songs list over their 40 plus year career. So we have narrowed our choices down to just the material the band released during the 1970’s. For many fans this is considered Chicago’s golden period. It was tough to only pick 10 from just the 1970’s as they released so much wonderful material. But the goal of our list is to have some fun, and turn young people on to a band they may not know much about. We hope you enjoy our picks for the top 10 Chicago songs of the 1970’s

The perfect way to open up our Top 10 Chicago songs list is with the great duet between Peter Cetera and Terry Kath. The song was written by Robert Lamm who joins in on the vocals on the second part of the song. “Dialogue Part I & II,” was released on Chicago V

in 1972. The song was issued as a single in an edited version. The song also featured Danny Seraphine  on drums, Jimmy Pankow on trombone, Lee Loughnane  on trumpet and Walt Parazaider on  tenor saxophone. This was the band Chicago!

Chicago VI was released in 1973. The album featured two huge hits that were both sung by Peter Cetera. Both of these songs are amazing records that are so well written, sung and performed that it was impossible to choose between either one of them. Popular music does not get better than this. “Feeling Stronger Every Day,” and “Just You and Me,” were both written by Chicago’s James Pankow.

Can anyone think of a happier song than “Saturday In The Park?” Just the opening piano part of the tune makes you want to jump up and dance through the park eating a cream cheese bagel and drinking a cold lemonade. This song was played constantly on the radio in the early 1970’s, and we never got sick of it. Chicago’s “Saturday In The Park,” was released on the Chicago V

album. The song was written by Robert Lamm who also sang the lead vocal on the song’s verses. Peter Cetera sang lead in between the verses. Lamm’s and Cetera’s harmonies were to die for on this one.

Just mentioning the wonderful harmonies on the song “Saturday in the Park,” made us instantly think of perhaps the most beautifully harmonized performance of all the Chicago songs released in he 1970’s. In the seventies, Chicago shared two double bills with The Beach Boys. Attending a Chicago / Beach Boys concert was almost a right of passing for many teens in the 1970’s. The beautiful Chicago ballad “Wishing You Were Here,” appeared on the double album Chicago VI

in 1974. The song featured The Beach Boys on backing vocals making it one of deepest Chicago songs the band ever released form a harmony stand point.  It doesn’t get any better than listening to Peter Cetera, Terry Kath, Al Jardine and Carl and Dennis Wilson sing in beautiful harmony.

that the band released a single record album. The band had so much talent, they just couldn’t contain the amount of great tracks they were recording. These last Chicago songs really could be arranged in any order. They are all masterpieces. “Make Me Smile,” appeared in Chicago’s second record which was just titled Chicago.

There are sales and airplay charts that track every album and single ever released by any major band on any major label. However, there does not seem to be any charts that tracks how many times a song was used a couples first dance at their wedding. If there was, Colour My World would be high on that chart. Along with Billy Joel’s Just The Way You Are and Eric Clapton’s Wonderful Tonight, Chicago’s “Colour My World,” was one of the most often go to songs for wedding nuptials.

It’s a beautiful song that every beginning piano player and amateur tried playing on the piano. The song’s heartfelt vocal and flute solo was one for the ages.

# 4 – Does Anybody Really Know What Time It Is

A popular political saying in the 1960’s was “do you what time it? ” is, or  “I know what time it is.” The sayings were tied into the Civil Rights Movements and Vietnam War Protest Movements. You could not be a series rock band or artist in the 1960’s and not be affected by the turmoil of the decade. Many artists like Bob Dylan,The Jefferson Airplane and Neil Young responded to the times in direct messages that were clear as the light of day. Other artists responded in a more vague sense, yet they still responded. Was Chicago’s Does Anybody Really Know What Time it? a political song? That’s up to you to decide. One thing is certain, it was a brilliant piece of music.

. The band dropped the Transit Authority part of the name on the second album due to legal issues with the official Chicago Transit Authority.  Nonetheless, it didn’t matter what you called the band on their first album because that first record was jaw dropping. The band was clearly inspired by the success of Blood Sweat and Tears. However, Chicago’s sound was little different from Blood Sweat and Tears and clearly groundbreaking.

Chicago’s first album did not light charts up initially, but eventually proved more popular after the release of their second album. The song “Beginnings.” was the second single released from the album in 1969. It did not chart well at first, but did much better when it was later re-released as a single in 1970.

Like the other two singles released form the album, “Does Anybody Really Know What Time It Is?” and “Beginnings,” the song became a bigger hit when it was reissued a year later. The band was thought to be more FM album rock based than AM pop radio friendly. Bit that would change quickly when Chicago II

was released. “Question 67 & 68,” was the first single the band Chicago ever released. It stands as one of the most exciting Chicago songs in the band’s stellar catalog.

Chicago’s second album was released on January 26, 1970. Like their debut album, Chicago’s sophomore album was a two record set. Three of the songs that we included on our version of the Top 10 Chicago songs were issued on Chicago II

. What’s more relevant about Chicago’s second album was the impact the record had in the music industry and how it revitalized their first record and turned the band Chicago into a household name for the next 45 years.

The break through song for the band was the second single released from the album entitled “25 or 6 to 4.” The song became the band’s first top 10 hit reaching number 4 on the Billboard Top 100 music charts in 1970. The lead vocals on the song were sung by Peter Cetera. The song was written by Robert Lamm. It’s tough to choose the top spot but because of the impact the song had and the countless musicians who have played that iconic riff on their guitars, “25 or 6 to 4,” is our choice for the number one spot on our top 10 Chicago songs list.