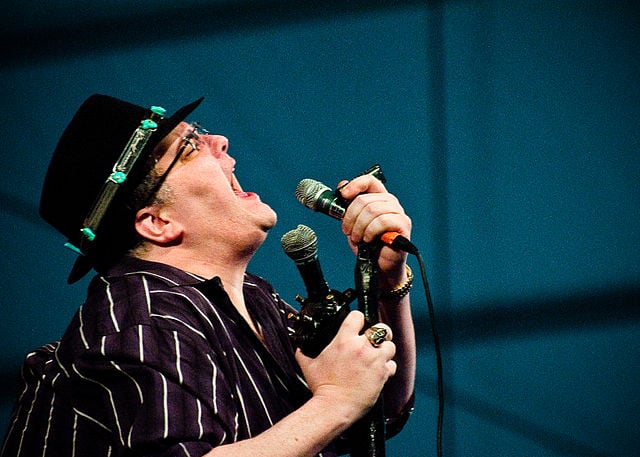 Our Top 10 Blues Traveler songs lists looks back at the songs of a band that is considered one of the all time great jam bands. The term jam band in this instance defines a group capable of not just playing live extended jams but also of delivering those jams fueled with great musicianship. The 1990s  gave birth to a set of great jam bands like Blues Traveler, The Dave Matthews Band and even the reformed Allman Brothers Band. Often overlooked in the shadow of the great grunge movement, bands like Blues Traveler offered a great alternative sound to groups like Nirvana and Pearl Jam. What separated Blues Traveler from all bands was the extreme talents of John Popper and his extraordinary ability to make the harmonica sound like it never sounded before. Additionally, the man is a great singer and brilliant songwriter. Of course there is also the smoking guitar playing of guitarist Chan Kinchla who also contributed mightily as a songwriter in the band. On drums is Brendan Hill. Original bassist Billy Sheehan passed away in 1999. He was replaced by Tad Kinchla on bass. Keyboardist Ben Wilson also joined the band in 1999.

We open up our Blues Traveler songs list with the great song “The Mountains Win Again.” The second the song starts you just feel good. That’s what’s special about Blues Traveler songs. They make you want to dance, make you want to breath clean air, they make you want to smile. That may sound a bit corny, but isn’t that what we all want when listening to music…… to just feel freaking good. The song “The Mountains Win Again” was released on the band’s 1995 album entitled Four. It was released as a single but it failed to chart. Warren Haynes of the Allman Brothers Band and Gov’t Mule plays some amazing slide guitar on the track

Continuing with our top 10 Blues Traveler songs list we turn to the band’s debut album entitled Blues Traveler.  The album was released in 1990. At number nine on this list we present the great grooving song “Gina.” Placed in the second slot on the record’s side one, this one just hits you hard with so much soul, so much groove, you just can’t help but love it. Listen to John Popper play the harmonica at the end of this track. If that didn’t turn heads we don’t know what would.

“You Don’t Have To Love Me,” is one of the band’s most recent releases to make this top 10 Blues Traveler songs list. This is a deep emotional song released by Blues Traveler. The song was released on the album entitled Suzie Cracks the Whip. The album was released in 2012. The song “You Don’t Have To Love Me,”  was released as the album’s only single. The song was written by Aaron Beavers  The guitar and harmonica solo at the end are sick, as they blend together defining years of jamming together as one.

The soft acoustic feel on this classic Blues Traveler song catches the listener’s attention instantly.  You know this one is going to be special and you sure well know that it’s going to build in intensity pretty quickly. Which of course it does. This is a great one. The song “Most Precarious,” was released on the album Straight On till Morning. The album was released in 1997. “Most Precarious,” was a top 30 hit on both the U.S. Billboard Alternative and Mainstream Rock charts. The song also broke the Billboard Hot 100 peaking at number seventy four. “Most Precarious,” would be the last Blues Traveler song as of this writing in 2021 to break into any of the U.S. Billboard Charts.

At the halfway point on our top 10 Blues Traveler songs list we turn back once again to the band’s great debut album entitled Blues Traveler. There were so many standout tracks on the record. However the song “100 Years,” was one of our favorites. The musicians on the album and the band at the time included John Popper on lead vocals and harmonica, Chan Kinchla on guitar, Bobby Sheehan on bass and Brendan Hill on drums. The great Joan Osborne sang backing vocals on the track.

“Carolina Blues,” is another top 10 Blues Traveler song at least in our subjective view. The song was taken from the album Straight On Till Morning. The great Straight On Till Morning album was released in 1997. The song “Carolina Blues,” was the opening track on the album. The song was also released as a single. It did well in the United States where it hit number four on the U.S. Billboard Modern Rock Tracks charts. The album also featured the band’s friend Warren Haynes on guitar. It was the last album to features bassists Bobby Sheehan who sadly passed away in 1999. It is also the last Blues Traveler album to go Gold and Platinum in sales.

Everyone knows this one. The classic Blues Traveler song “Hook,” was released in 1995. The song was placed on the band’s breakout album entitled Four. The song “Hook,” was released as the follow up single to the band’s smash hit “Runaround.” While not as successful commercially as “Runaround,” it still did well on the charts. The song “Hook,” was a top 10 hit on the U.S. Billboard Pop Charts peaking at number eight. The song also broke the top 30 on multiple other U.S. Billboard music charts including the Billboard Adult Contemporary, Adult Top 40, Mainstream Rock, Alternative Rock, and Hot 100 music charts. That’s a lot of charts.

We close out our top 10 Blues Traveler songs list with the band’s biggest hit of their career. This is such a legendary song with a riff, a melody, and an amazing set of chord changes that just define the word classic. The song “Run-Around,” was released on the band’s brilliant album entitled Four. The song was released as the album’s lead single. It was top 10 hit on five U.S. Billboard music charts. It is the band’s only song to break the top 10 of the hard to break into U.S Billboard Hot 100. It is also the only Blues Traveler song to break into the UK charts.