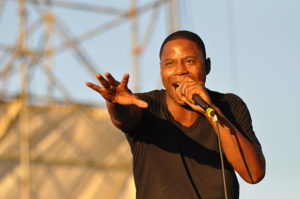 Born in Barbados, but raised in Harlem, New York, Doug E. Fresh earned his name in the music entertainment industry as an artist who could best imitate drum beat sounds in his rapping performances. Otherwise known as a beatboxer, not only was Doug E. Fresh producing music as a solo artist but through collaborative work as well. Earlier in his career, he formed Get Fresh Crew, along with deejay artists Chill Will and Barry B, and rapping artist MC Ricky D. This is the same MC Ricky D that would later become Slick Rick. They reunited again in 1995 to record his fourth studio album, Play, which became a certified gold album by the Recording Industry Association of America (RIAA) not long after its release

The song, “Come Again,” served as Doug E. Fresh’s on-the-spot rap song he performed before a live audience as he paid homage to New York City and its infamous neighborhoods such as Brooklyn, the Bronx, Harlem, and Queens. Although the song itself never charted, it still displayed the raw talent of Fresh at its finest. The song itself is not associated with any specific album as of yet.

Although not charted, “Spirit” was a track from the 1989 soundtrack belonging to the ghostly comedy, Ghostbusters II. Doug E. Fresh made a trademark out of producing material that was comedic enough to enjoy, even if the listener may not be a fan of rap music in general. The song is focused entirely on spirits and how they’re regarded by people when they come into contact with the supernatural.

From Doug E. Fresh’s fourth studio album, Play, “I-Ight (Alright)” was a single that climbed up to number twenty-seven on the US Billboard Hot Rap Songs chart, and charted on the US Billboard Hot R&B/Hip-Hop Songs chart at number seventy-three. It was one of many tracks featured on his 1992 album that brought back old-school rap onto the music scene. The party-style beats, plus the classic funk breakbeats, made “I-Ight,” an easy favorite at the timing it first came out and is still one of those early hip-hop songs that fans can easily identify as a Doug E. Fresh favorite.

“Summertime” charted at number twenty-seven on the US Billboard Hot Rap Songs when it was released in 1989, as well as at number fifty-five on the US Billboard Hot R&B Hip-Hop Songs chart. The song was credited to the Get Fresh Crew by the billboard charts, but it was led by Doug E. Fresh, who rapped about how the summer season is meant to have fun dancing, singing, and simply enjoy the music as it’s played.

Starting off as a diss against generic hip-hop, rap-style music, “All The Way to Heaven” featured Doug E. Fresh representing the Get Fresh Crew in this 1986 charted hit. The rap song came from his debut album, Oh, My God!, which was released on July 7, 1986. On the US Billboard Hot R&B/Hip-Hop Songs chart, All The Way to Heaven climbed up to number nineteen. It also appeared on the UK Singles Chart at number seventy-nine. Defiant against corporate expectations from the start of the song to its end, the song also served as an inspirational piece to stand up for the right to be an independent individual.

Rich with trumpet, and crowd cheers, “Bustin’ Out (On Funk)” charted at number fifteen on the US Rap Songs chart in 1992 and at number twenty-eight on the US Billboard Hot R&B/Hip-Hop Songs chart. The single came from Doug E. Fresh’s third studio album, Doin’ What I Gotta Do, which was released on April 27, 1992. Like most of his singles, whether as a solo artist or teamed with the Get Fresh Crew, Doug E. Fresh lyrically engaged in challenge-style social issues, as well as self-promotion of his music and his bandmates.

On the US Billboard Hot R&B/Hip-Hop Songs chart, “Keep Risin’ to the Top” was credited to the Get Fresh Crew. The album, The World’s Greatest Entertainer, was released on May 31, 1988, as the second studio album credited to Doug E. Fresh. Less poppy than most of his other rap-style songs, Keep Risin’ to the Top proved to be more rhythmic as the continual promotion of the group and its star presence was in the house.

1985’s “La Di Da Di”, has since become one of the most sampled tracks in the music industry of all time, which featured Doug E. Fresh as the beatboxing talent while Slick Rick performed the vocals. In a comedic, rap-style tale of a somewhat silly autobiography, the song has since become an early hip-hop classic that influenced Snoop Dogg enough to cover it as a single in 1993.

“The Show” came from Doug E. Fresh’s debut album, Oh, My God! and became the second highest-charting hit of his music career. Teamed up with fellow rapper, M.C. Ricky Dee, the two’s comedic performance of the single made history when it became the best-selling rap song of all time, at least in Europe. On the UK Singles Chart, the song peaked at number seven. The Show actually had mixed reviews from the critics as some loved it, others hated it. However, the fans loved it enough where it also charted as high as number four on the US Billboard Hot R&B/Hip-Hop Songs chart. It also climbed to number thirteen on the Dutch Charts of the Netherlands. The Show also earned a gold certification from the RIAA.