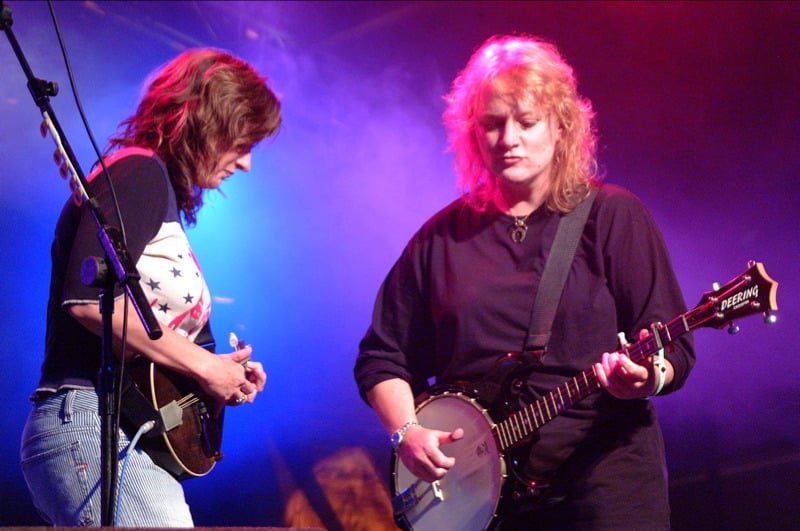 The Indigo Girls were first formed when Amy Ray and Emily Sellers met in elementary school. Having performed together previously under a couple of names, they started as the Indigo Girls in 1985. During their first couple of years under the name they released a string of demos and ep’s. They released their self-titled debut in 1988 which got the impressive position of number twenty-two on the US album charts. They would continue to be successful for the next couple of years, winning a Grammy Award in 1990 for Best Contemporary Folk Album.

The Indigo Girls have continued to consistently tour and record since their inception and to this day are active both musically and politically.

Kicking off our Top Ten Indigo Girls songs list is this track from 1994’s Swamp Ophelia that is one of Emily Seller’s best penned numbers. Like several of the Girl’s greatest songs, it comes from a deeply personal place whilst at the same time looking at the idea of how we view the world around us and why certain people have an empathetic view of things that happen in the world whilst others do not. Both of the members share the vocal arrangements in the song and the chemistry that they have here shows that they are completely co-dependent to each other in order for the Indigo Girls to work.

This song was an original number that was featured on the Indigo Girls Retrospective compilation released in 2000. This is a song that very much shows Amy Ray’s penchant for writing very poignant love songs where she wears her heart on her sleeve. When you listen to how she sings the song, you can completely feel that obvious heartbreak that she has been through. Although the Indigo Girls may be politically driven in a lot of their work, personal heartbreak and relationship problems have been the inspiration for several of their most powerful songs. This song was likely chosen to be included on the Retrospective compilation as the lyrics are retrospective in nature: by looking at how our past defines us and how our present is defined by people that we meet and form relationships with. As usual, as with all of the greatest Indigo Girls songs, the other member is just as important as the song’s lyricist, with Emily backing Amy up with some very impassioned backup vocals.

Continuing with our Top 10 Indigo Girls Songs list we present a track  from 1994’s Swamp Ophelia. This is another one of Amy’s best written tracks. The lyrics talk about anger and alienation that she feels towards another individual but yet at the same time she feels open hearted towards them. Emily also provides a brilliant contribution on the track with her sublime guitar melodies that she is well known for.

What Are You Like is a single taken from the Indigo Girls eleventh studio album released in 2009 titled Poseidon and The Bitter Bug. The album reportedly sold around 70,000 copies in the US. The title of the album is a combination of lines from two other songs on the album: “Fleet of Hope” (You’re all washed up when Poseidon has his day”) and “Second Time Around” (I’ve been bitten by the bitter bug.)

This is not actually an Indigo Girls but is by pop megastar Pink and features the Indigo Girls. It is taken from her fourth album I’m Not Dead released in 2006. As the title would suggest is a scathing attack on then-President George W Bush, particularly on his declaration of war on Iraq and his opposition to gay and lesbian marriage, an issue which both Pink and The Indigo Girls are deeply passionate about. Upon its release, the song was an international hit, charting high in several countries across the globe.

At the halfway point on our Top 10 Indigo Girls Songs list is the single “Shame On You.” The song is taken from the Indigo Girl’s sixth album released in 1997 titled Shaming of the Sun. The song’s lyrics tackle the issue of racism and the demonization of illegal immigrants. The track also features contributions from legendary folk musician Steve Earle who performs backup vocals as well as harmonica.

The Power Of Two was released on the from the album Swamp Ophelia released in 1994. This song has been covered several times. In 2009 Michael Feinstein covered it and named the album on which it was included after it. It has also been covered by two Filipino singers: Azie Seguerra in 2010 and Noy Valente in 2012.

Here is a cover song of a track that was originally recorded by Crazy Horse and recorded for the soundtrack of the 1993 movie Philadelphia starring Tom Hanks. It has also been covered by various other artists. Although the song’s lyrics are not explicitly about the issue, The Indigo Girls presumably contributed to the soundtrack because the movie, although controversial at the time, dealt with the issue of homophobia during the time of the aids epidemic.

This song is from the Indigo Girl’s fourth album Rites of Passage which was released in 1992 and was a multi-platinum selling hit. This single got to number ten on the Modern Billboard Tracks making it their first top ten hit. It is a song that is often known to close the group’s live concerts. The lyric’s deal with the concept of reincarnation.

At number one on our top 10 Indigo Girls Songs list is the opening track of the group’s second self-titled album which was their first major label release. The album was highly successful both critically and commercially and got the Indigo Girls nominated for a Grammy for Best New Artist. This song was released as a single and to this day is one of their most performed songs and is usually their closing number at concerts.