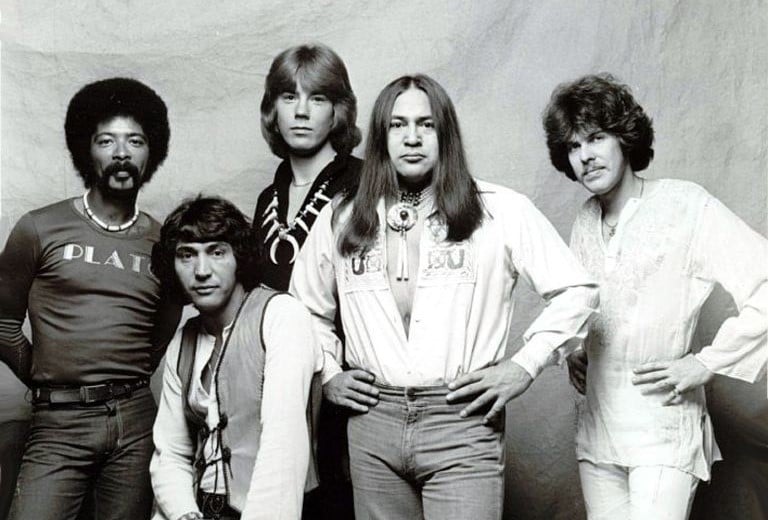 Our top 10 Redbone songs list looks back at the music of the first all Native American rock band who were very successful in the early 70s. Most of that success stemmed from the release of one of the biggest rock songs issued in 1974 entitled “Come and Get your Love.” That song has continued to infiltrate pop culture over the past 50 years. Redbone released their first album in 1970 entitled Redbone. That album was followed up in the same year with a record call Potlatch. In 1971 the band released the album Message From a Drum, and in 72 the album Already Here Was Released. As one could tell from the titles of their albums, their Native American Heritage played a major role in their song lyrics.

In 1973, the band released the landmark album that would make them for at least a little bit of time, a household name. The album Wovoka contained their big hit “Come and Get your Love.” Redbone released only two more albums after that. In 1974, Redbone released the record Beaded Dreams Through Turquoise Eyes. The final album of the 1970s was released in 1977 entitled Cycles. Redbone would make a comeback in the 2000s releasing one more record in the year 2005 entitled Peace Pipe.

While many Rock fans are familiar with the song “Come and Get Your Love,” most will not remember Redbone’s other songs. There were many great ones. Our top 10 Redbone songs list was written to introduce many fans to the music of Redbone.

We open up our top 10 Redbone songs list with the  track “Light as a Feather” which features a mix of rock and roll with some soul and funk along the way. The band actually sounds like Grand Funk Railroad on this track. The song was released on their second album entitled Potlatch which was issued in 1970.

Continuing with our top 10 Redbone songs list we jump a good seven years ahead in time to their final 1970s album entitled Cycles. On the song give our love another try and almost sounds like a completely different band from the 1970s version. The sounds of disco and high end production surely played a role on this one. Still, this is a pretty good tune.

Songs like this are the reason why we create these top 10 song list. This is such a killer tune that most people have probably never heard of. The 1970s had so many great bands that crossed genres of music. Groups like Blood Sweat & Tears, Chicago, Earth Wind & Fire and so many others blended elements of all styles of music to create just a decade a superb songs. You can hear how all of that inspired even bands like Redbone. It’s right here in this song “When You Got Trouble.”

This this is Redbone sounding a like Frankie Valli and the Four Seasons. It’s actually kind of cool. The song Suzi girl was released on the Beaded Dreams Through Turquoise Eyes album.

As we enter the second half of our top 10 Redbone songs list we percent the song “Maggie.” This is always going to have our favorite Redbone songs. It’s heavy and it sounds a little bit like Steppenwolf. The the song was released on the album Potlatch. It was the band’s second album. The record was released in 1970.

# 4 – We Were All Wounded At Wounded Knee

At number three on our top 10 Redbone songs list we turn to the single “Wovoka.” The song was also the title track to their album Wovoka. This was the band’s most successful album of their career. “Wovoka,” was released as the second single from the album following up their band’s biggest hit of the career “Come and Get your Love.” The song “Wovoka,” did not break the Billboard Hot 100 but it did hit number one on the Billboard Bubbling Under Hot 100 chart. The song “Wovoka,” charted the highest in the Netherlands where it hit number three.

As we begin to wind down our top 10 Redbone songs list we turn to another one of the band’s biggest hits. The song the “Witch Queen of New Orleans,” was released in 1971. It was issued on the band’s album Message From a Drum. It was the band’s third album. The song was released as the first single from the record. There were a lot of firsts for this one.“Witch Queen of New Orleans,” became the band’s first top 40 hit as a peaked at number 21 on the Billboard Hot 100. It also became the band’s first number one record that’s a hit number one in Belgium. It was also very successful in the United Kingdom reaching all the way up to number two. The song was written by brothers Lolly Vegas and Pat Vegas.

We close out our top 10 Redbone songs list with the one that everybody knows. Coming in at number one is Redbone’s legendary classic hit “Come and Get your Love.” The song was first released on the album Wovka. That album was released in 1973 the song was a huge hit at the time. In the spring of 1974,“Come and Get your Love.” hit number 5 on the Billboard Hot 100. It would become one of the biggest songs of the year as it spent almost five months in the Billboard Top 40. It’s a pretty impressive feat when one remembers back how popular successful artists like Elton John and John Lennon were in 1974 with some of their huge hits they had together. The song was introduced to a whole new the Legion of fans in recent years when it appeared in the film Guardians of the Galaxy. “Come and Get your Love.” was written by Lolly Vegas.