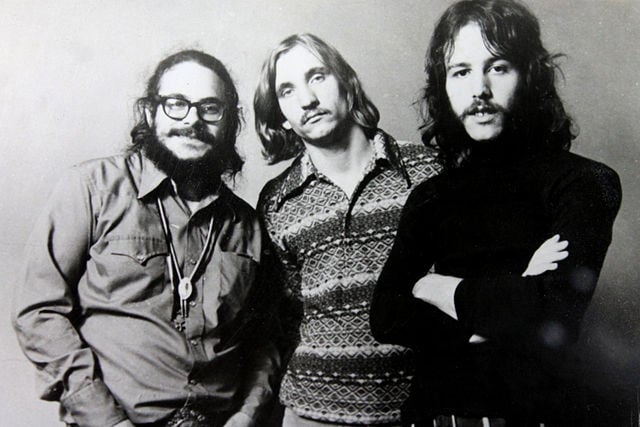 Our Top 10 James Gang Songs list takes a look at a band that is often overlooked in classic rock history. The James Gang were one of those classic rock bands that have scored a few hits and achieved heavy FM radio play, yet few people associate some of those songs with the band. When many rock fans hear one of the classic James Gang songs on the radio they often comment, “Oh yeah, I know that song, who was that?”  Of course, many of us who grew up buying every great rock and roll record in the 1960’s and 1970’s are very familiar with the group. Nonetheless, there are kids I teach in middle school that still can’t name one of The Beatles or think that Led Zeppelin was the name of some guy.  The James Gang, for so many, are a band that is not well-known in today’s youth culture of 200 That’s why we write these lists. In hope that younger people will discover some of the great rock bands of the classic rock era.

The James Gang released their first album entitled  Yer’ Album in 1969. The album featured Joe Walsh on guitar, Tom Kriss on bass and Jim Fox on drums. The band’s follow up album appropriately titled The James Gang Rides Again was issued in 1970. The album featured Dale Peters replacing Tom Kriss on bass. Joe Walsh released one more record with the James Gang in 1971. The album Thirds featured the same three core musicians from the band’s second record. Joe Walsh would leave the band after the group’s third album and eventually became a member of The Eagles along with releasing a series of successful solo albums.

The James Gang would continue to record albums despite the loss of Joe Walsh. The band would release six more albums after Joe Walsh departed ending with their final album in 1976 entitled Jesse Come Home.

The James Gang song “Woman,” was issued on the band’s second album titled The James Gang Rides Again. We just the song’s opening drum and bass groove setting yop the entrance of the great Joe Walsh. No one records songs like this anymore.The song was written by Joe Walsh, Dale Peters and Jim Fox.

The James Gang song “Tend My Garden,” was issued on their 1970 album The James Gang Rides Again. The song was written and sung by Joe Walsh. It was the album’s B side opening track.

The James Gang ballad  “Ashes The Rain and I,” was released on the album The James Gang Rides Again. The song “Ashes The Rain And I,” was the album’s closing track. The song was written by Joe Walsh and Dale Peters. The song’s classical acoustic opening guitar lines define the talents of Joe Walsh beyond that loud distorted sound that he was known for. The strings that surrounded the song’s haunting melody made for one of the most distinctively different tracks in the band’s catalog.

From the album, The James Gang Rides Again. The song “The Bomber,” was written by Joe Walsh, Dale Peters and Jim Fox. The song’s songwriting credits for obvious reasons are all given to Maurice Ravel, and Vince Guaraldi. Simply stated just a great piece of music. The legendary Joe Walsh guitar sound and soloing ability heats up the track right after the opening verse. There is nothing like hearing Joe Walsh tare it up on Maurice Ravel’s “Bolero.”

Out of all the James Gang songs on this list, there is no song that was as commercially successful as the track “Walk Away.” The song “Walk Away,” was released on the band’s Thirds album. The song hit number 51 on the Billboard Top 100. It was the highest charting song of the band’s career.

Rounding out our Top 10 James Gang songs list is a pair of tracks that are as closely named as possible. The great James Gang song Funk #48 was released on the band’s first album entitled Yer Album. The album was released on March 29, 1969.  It was the same year The Beatles released Abbey Road, The Rolling Stones released Let It Bleed and Led Zeppelin released their debut album. In the mist of all that great music The James Gang exploded onto the scene and grabbed a little bit of that rock and roll pie for themselves.

While some fans may like the song “Funk #48,” a little more than the song “Funk #49”, there is no comparison when it comes to overall popularity. The great James Gang song “Funk # 49,” is easily the most recognizable James Gang Song of the band’s career. It’s that one song that everyone says “hey I didn’t know they did that song.”