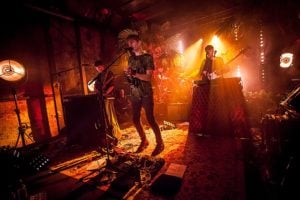 Our top 10 Glass Animals songs introduce us to a British band famed for its indie rock and indie pop music sound. Glass Animals was formed in 2010 by childhood friends Dave Bayley, Ed Irwin-Singer, Drew MacFarlane, and Joe Seaward. The band released its first EP Leaflings in 2012 under Kaya Kaya Records. Adele’s producer Paul Epworth saw the band performing in London and was impressed hence signing Glass Animals to his label Wolf Tone. The band went on to release the EP Glass Animals in 2013. Glass Animals received their first global attention through online reviews of the song “Black Mambo,” one of the band’s best releases.

The band later released several other singles, all included on the debut album Zaba (2014). “Gooey” was a big tune in 2014 and 2015, having the band perform the song on The Late Show with David Letterman. At this time, the band had already gained fame, bagging collaborations with artists like Tei Shi and Joey Badass. Later in August 2016, the band released the album How to Be a Human Being, which featured prodigious hits such as “Youth” and “Life Itself.” While Glass Animals had scheduled many tours, the band was forced to cancel the them after drummer Joe Seaward was seriously injured in an accident in July 2018.

After Joe’s recovery, the band released the hit “Tokyo Drifting,” a duet with American rapper Denzel Curry. The song was later included on the band’s album Dreamland (2020). However, the album’s release was delayed to focus on discussions of police brutality, and racism and the Black Lives Matter movement, which took center stage at the moment. The album featured the splendid hit song “Heat Waves,” which was included on the FIFA 21 soundtrack. All through their career, Glass Animals have maintained their musical style, only adding some elements of psychedelic pop and electronic rock to their sound. Thanks to the members’ great musicianship and friendship, Glass Animals’ lineup has remained unchanged since its inception. Here are the top 10 Glass Animals songs from the band’s short yet inspirational music career.

Ushering us to the top 10 Glass Animals songs is the hit “Exxus,” first released on the quartet’s EP Glass Animals (2013). The song’s title is derived from the genus of an earthworm type. “Exxus” has death personified into a physical humanoid being. Lead vocalist Dave Bayley channels the idea that death can be fought and conquered if it embodies a physical form. The persona in the song meets ‘death’ one-on-one with its putrid breath causing him to choke. Instead of embracing fear, he smiles to exhibit unmatched confidence. Rafael Bonilla created the music video for this song using surreal animated creatures which makes it an interactive clip to watch.

“Pools” is a rhythmic song from Glass Animals’ debut album Zaba (2014). The song is delivered on an exotic upbeat tune that blends psychedelic pop with indie-pop sounds. “Pools” also feature some magnificent hooks and slightly repetitive lyrics that aids in making the song catchy. You ought to love the song’s steamy drumming from the band’s drummer Joe Seaward. Again, the band uses a stop motion clip directed by Rafael Bonilla for its music video.

Yet another great hit from the band’s debut album Zaba (2014) is “Black Mambo.” The slithering ballad is delivered on an ominous music video and moody tune. “Black Mambo” literally features a mole and a sloth facing off in a game of dominoes. The song steadily evolves to yield some soulful harmonies, thanks to awe-inspiring instrumentation from the quartet. Lead vocalist Dave revealed that he was inspired to write about the song while watching the film Breaking Bad. In the film, Walter White, despite being the underdog, employs his intellect to achieve his objectives. This brings us to the idea of fighting hard even when outmatched by an opponent.

“Pork Soda” is a song featured on the band’s sophomore studio album How to Be a Human Being (2016). A tattoo inspired this harmonious song. Lead vocalist Dave Bayley revealed that the tattoo was a stick figure pig with the initials “pork soda” in large scrawling alphabets. Pork soda is a slop obtained by spilling draft beers at a tavern into a bucket. The metal band Primus named its third studio album after pork soda.

Number six on our top 10 Glass Animals songs list is the hit “Life Itself,” a catchy song from the band’s album How to Be a Human Being (2016). Lead vocalist Dave Bayley revealed that the song is about a gentleman born a little peculiar and finds it rough trying to fit in the society. Following this, he spends time alone, holding endless conversations in his head. The lyrics to the song feel like a memoir with the subject guy destined for what Dave called a cycle of doom in relation to his infinite struggles. “Life Itself” is delivered in an energetic percussion-driven sound which helps it stand out from many songs in the album.

“Toes” is one of the most melodic Glass Animals songs from the band’s album Zaba (2014). The song is delivered in some gospel-like harmonies superimposed on some inspiring vocals from Dave Bayley. “Toes” has its lyrics alluding to the book The Island of Dr. Moreau. The book channels the message of a man who gets stranded on a creepy island that is home to bizarre animals.

Zaba (2014) brings to us a magnificent song “Hazey,” whose glory lies in its arrangement. The song features some hallucinatory beats and perfectly delivered vocals that make the song unique. “Hazey” has its lyrics alluding to feeling upset about a toxic relationship with an alcoholic woman. Trying to quit the relationship feels even harder adding to the subject’s frustrations. At some point, the lady even gets physically abusive, leaving the guy overwhelmed about how to handle this delicate situation.

Lead vocalist Dave Bayley was inspired by a story someone told him in penning the lyrics to “Youth,” a song that yields a rollercoaster of emotions. The combination of bitter and sad emotions is generated by locating great memories amidst tough times. Dave’s vocal delivery is woozy in this nostalgic song which finds him singing from the standpoint of a parent to a child. The high-pitched synth sounds and drums help deliver the sense of tragedy in this song from the band’s album How to Be a Human Being (2016).

“Gooey” is one of the best Glass Animals songs from the band’s album Zaba (2014). The song has vocalist Dave Bayley deliver his vocals grabbing a pineapple named “Sasha Fierce.” “Gooey” has its final chorus in different impressions, including a terrible parody of singer James Brown. This dreamy love anthem was featured on the soundtrack of Magic Mike XXL. “Gooey” peaked at number twenty-six on the Billboard Hot Rock & Alternative songs.

Number one on our top 10 Glass Animals songs list is “Heat Waves.” The song is featured on the band’s latest album, Dreamland (2020). “Heat waves” steadily rose on the charts, becoming the only Glass Animals song to reach the Top 10 of the Billboard Hot 100 Chart peaking at number ten. The song’s lyrics allude to a gentleman who is having it all wrong in a relationship. His angst is directed inwards, having him blame himself for not loving his partner right. Like most of the songs in Dreamland (2020), “Heat Waves” is autobiographical, looking at Dave’s past life.