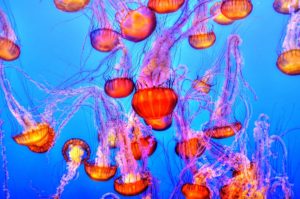 Our top ten Jellyfish songs looks at the work of a band who were formed in San Francisco in 1989. Their music was a unique mix of classic rock and power pop. Although they only released two albums, they proved to be very influential on many similar artists.

The band was driven by the songwriting partnership of drummer and vocalist Andy Sturmer and vocalist and keyboard player Roger Manning. Both of these members had previously been in the band Beatnik Beach but quit to form Jellyfish. Joining them initially was guitarist Jason Falkner and Roger’s brother Chris Manning on bass. After the release of their debut album Bellybutton they both left and were replaced by Tim Smith on bass and Eric Dover on guitar. With this lineup they released their second and final album titled Spilt Milk.

Jellyfish’s existence only lasted for five years and although they received much critical acclaim they unfortunately gained little commercial success beyond their own cult following, due to their style of rock not being the kind that was popular at the time. They only had one single reach the Billboard 100 although they did have three that entered the Modern Rock Charts. They also had a few songs chart in the UK but none higher than the top thirty. In 2007 British boyband McFly had a hit with their cover of the Jellyfish song “Baby’s Coming Back” which topped the charts.

The lack of success took its toll on the band and they broke up in 1994. Manning and Dover formed the band Imperial Drag and Manning also embarked on a solo career and worked as a sessions musician. Sturmer has been largely absent from the public eye apart from working with the Japanese band Puffy AmiYumi. In 2017, Manning, Dover and Smith regrouped together as the Lickerish Quartet. Here is a list of the ten best Jellyfish songs.

Kicking off our top ten Jellyfish songs is this track that was written for the compilation album Nintendo: White Knuckle Scorin. It was written whilst the band were recording their second album Spilt Milk. The song’s lyrics deal with the concept of characters from the Mario video game franchise. Although the band were not particularly fans of video games, they accepted the challenge when they were asked to contribute to the compilation.

Next up is the opening track from the band’s debut album Bellybutton released in 1990. The album was recorded and released a mere year after the band’s formation. The process of recording the album was reportedly rather tense in nature due to frequent clashes between Andy Sturmer and Roger Manning. Upon its release, the record was met with much acclaim from music critics.

The next track is taken from the band’s second album Spilt Milk released in 1993. This album had a slightly heavier sound than that of the first record. The album’s recording was reportedly even more tense than the first album, particularly since Chris Manning and Jason Faulkner had left due to disillusionment, with Faulkner in particular feeling frustrated about his songwriting contributions being ignored by Sturmer and Roger Manning. The album was not massively successful, it did not sell very well and received moderate critical reviews, a fact largely attributed to the popularity of grunge at the time. It has gained more appreciation retrospectively.

Ending the first half of this list is the aforementioned other single to be taken from Spilt Milk. This was slightly more successful than the previous entry, reaching number forty-three in the UK, and also entering the US Billboard Alternative Airplay chart, where it got to number nine. The song has a very retro feel, sounding like a cross between Queen and The Beach Boys.

Kicking off the second half of this list is the final single to be released from Bellybutton. This song also charted in the UK where it got to number fifty-nine. This track has a more Adult Oriented Rock feel to it, and it is a surprise that it was not more commercially successful as it is the kind of track that sounds very designed for radio airplay.

Next on the list we have the fourth single to be taken from the third record. This is another that has a sixties feel to it, with The Beatles being a very clear influence. It is yet another track that charted in the UK where it reached number forty-nine. The reason that they had slightly more success in the UK than the US is likely because their music does have something of a British feel to it, being influenced by many of the classic bands of the sixties, which would have made it fit in with the Britpop movement that was going on at the time.

At the number three is the third single to be released from Bellybutton. In 2007 the British pop band McFly released a cover of it which got to number one on the UK Singles chart. Unfortunately this far superior original version only got to fifty-one in the UK and sixty-two on the US Billboard 100. Although, at least it can be said that Jellyfish’s influence was heard years after their breakup.

Just off the top spot is the second single to be released from the first album. This one actually achieved some success in the US, reaching number eleven on the US Alternative Airplay charts. Despite the record’s critical acclaim and support from MTV, it was a commercial disappointment, only reaching 124 on the Billboard 200.

Topping off our Jellyfish songs list is the band’s debut single taken from the debut album. It got to number thirty-nine in the UK and number nineteen on the US Alternative Airplay charts. This song is a clear example of what an underrated band Jellyfish where, as this track has a brilliant sense of melody and is generally very well played and written.