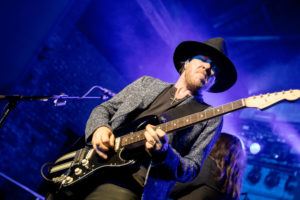 Our top 10 Kenny Wayne Shepherd songs list looks at the catalog of a self-made American blues artist. The 1977-born artist was gifted a little guitar by his grandmother when he was four, which inspired him to be a pro guitarist. However, he would start playing the guitar passionately when he was seven. This was after he was amazed to watch the legendary Stevie Ray Vaughan and his Double Trouble band at a concert his dad promoted. He also interacted with his father’s infinite assortment of music. His father was a local radio presenter.

Kenny Wayne Shepherd began practicing the guitar, learning a note at a time. Practice makes perfect having this blues artist hone his skills on the guitar each day. By the age of thirteen, he was invited by Brian Lee to amaze the audience with his skills on stage. A video shot at an arts festival and several demos by Kenny Wayne Shepherd saw him signed by Irving Azoff of Giant Records to record albums.

His name might not be the most popular in the blues scene, but at his primes, Kenny Wayne Shepherd took seven singles into the top 10. Kenny Wayne Shepherd’s sophomore album, Trouble Is… (1997), smashed the longest-running album record on the Billboard Blues Chart. One of the greatest Kenny Wayne Shepherd songs from the album was “Blue on Black.” The song features his longtime collaborator Noah Hunt on the vocals. None of his songs has received massive attention compared to “Blue on Black.” The song was nominated for five Grammy Awards, receiving other awards, including two Billboard Music Awards.

His impressive guitar skills saw Kenny Wayne Shepherd tagged to play on the title theme of Batman Beyond: Return of the Joker back in 2000. In addition, the blues artist interacted with artists such as Etta Baker, B. B. King. , Henry Townsend, Clarence “Gatemouth” Brown, Neal Pattman, and Cootie Stark. Later in 2013, Kenny Wayne Shepherd linked up with Stephen Stills of Crosby, Still & Nash, and Barry Goldberg of Electric Flag to form The Rides. The band released its debut album Can’t Get Enough in 2013 and a sophomore album under the title Pierced Arrow in 2016. Here are the top 10 Kenny Wayne Shepherd songs sampled from his nine studio albums.

Instrumental songs were still a great thing back in the 1990s. Enough proof is Kenny Wayne Shepherd’s “Deja Voodoo.” This instrumental song’s success is primarily based on Kenny’s guitar skills, showcasing how gifted he was on the guitar. The guitar chords of this blues tune are similar to those in “Yellow Ledbetter” by Pearl Jam. “Deja Voodoo” is featured on his debut album Ledbetter Heights (1995).

Lay It On Down (2017) is the eighth studio album by the American guitarist Kenny Wayne Shepherd. The album features great hits, including our number eight song on the list, “Baby Got Gone.” The song is based on a narrative about an independent lady who a guy falls in love with. Sadly, the lady’s free-spiritedness makes it hard for her to commit to the guy. The guy knows about this but still remains in love with her.

“Woman Like You” is one of the best Kenny Wayne Shepherd songs from his album The Traveler (2019). The song features his longtime collaborator singer Noah Hunt on the vocals. “Woman Like You” has its tone set by a horn section making the song quite melodious. The upbeat song showcases strong blues vibes that remind us of young Kenny Wayne Shepherd.

Number six on the top 10 Kenny Wayne Shepherd songs is the hit “Lay It On Down.” The song is the title track of his eighth studio album. “Lay It On Down” sends a message to the people with low esteem to love themselves better to allow other people to appreciate them. The guitar riffs on the song are catchy, having them bring on some pure blues vibes in a decade flooded with pop and hip-hop ballads.

Lay It On Down (2017) seems to be the most popular Kenny Wayne Shepherd album having it offer quite a number of his best blues ballads.”Nothing but The Night” is an original release from this highly reputable album. The song alludes to two souls who love each other with spending an evening together is on top of their bucket list. Kenny Wayne Shepherd co-wrote this track with Dylan Altman and Danny Myrick.

“Shame, Shame, Shame” is yet another great hit from Kenny’s debut album Ledbetter Heights (1995). Would you ever curse for loving someone? Such a feeling might come around when love is unrequited. Kenny Wayne Shepherd teamed up with Joe Nadeau in penning the lyrics to this heartbreaking ballad that finds the singer feeling sad for having loved someone who never loved him in a similar way. Shirley & Company released a song under the same title (but different lyrics) back in 1975.

Live On (1999) is one of the best Kenny Wayne Shepherd albums. While it might not have been commonplace from where we drew our top 10 Kenny Wayne Shepherd songs, the album still featured top hits from this blues artist, including “Shotgun Blues.” The song features Noah Hunt on the vocals. Kenny also teamed up with Noah Hunt in penning the lyrics of this song. Other artists to have released a song with the same title (but different lyrics) include Volbeat, Sonny Boy Williamson, Guns N’ Roses, The Blues Brothers, and B. B. King.

“Never Lookin’ Back” is a musical gem from Kenny’s album How I (2011). The song sets the tone for the album, which draws inspiration from his early releases. “Never Lookin’ Back” has Kenny show admiration for multiple styles by other guitarists. You can feel him pay homage to Stevie Ray Vaughan and Billy Gibbons with this song.