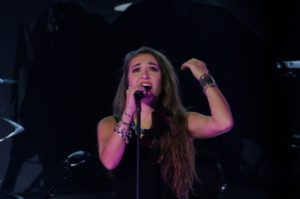 Our top 10 Lauren Daigle songs list looks at the body of work of an American vocalist  famed for her awe-inspiring Christian music. She is one of the most successful Christian music artists since the arrival of Amy Grant.  Born in 1991, Lauren Daigle grew up loving music and would often sing songs from other artists. While she might have chosen to stick to contemporary Christian music in her career, Lauren Daigle’s singing was inspired by blues, Cajun, and zydeco music. However, it wasn’t until she was diagnosed with a viral disease that she took on music seriously. With two years out of school due to the illness, Lauren Daigle turned to music as her solace.

During this period, she dedicated time for vocal training to perfect her singing skill. Lauren Daigle would later take on studies where she joined a charter school after which she went to Brazil for mission work in the medical field. Her return to her hometown Louisiana saw her join the Louisiana State University for further studies. At the university, she started making serious steps in music leading the institution’s choir. Her inspirational singing saw her family suggest that she auditions in a singing competition.

American Idol was her choice of music competition, having her try out in the 2010 auditions unsuccessfully. However, she didn’t lose hope and would be back in 2012, where she made it to the final twenty-four contestants only to go down with the first round of the competition. However, her exceptional vocals were gaining recognition elsewhere. Lauren Daigle’s music career received attention after recording two songs live for North Point InsideOut. Later, she would record this band’s song “It Is Well” in 2015.

After a successful time with North Point InsideOut, her powerful vocals saw her tagged by The Assemblie to aid with background vocals in the band’s EP. The EP was a success having it sell a record number of albums in the iTunes Store. Next, Lauren Daigle gained attention from Centricity Music. Stars aligned for Lauren Daigle after she got a rare chance to sing at the record label’s event. Her impressive singing saw Jason Gray feature her in his song “Nothing is Wasted.”

Centricity Music hesitated not in rewarding her with a recording contract. Lauren’s debut single at the label was “Light of the World,” which to gained her a larger fanbase in 2013. She would later be tagged in a tour where she performed alongside Mikeschair and Aaron Shust. Lauren Daigle hit the studio the following year, releasing her first EP, How Can It Be. A debut album under the same title was recorded and released in 2015. The album was quite a big deal having it debut at the peak of the Billboard Christian Album Chart. Since then, Lauren Daigle has been one of the popular figures in the contemporary Christian music scene, winning several awards for her inspirational music. Lauren has amassed three studio albums that ooze nothing less than magnificent vocals and breathtaking lyrical content.

Ushering us to the top 10 Lauren Daigle songs is the hit “Hold On to Me.” The song was released early this year and has been mentioned as the lead single to her upcoming album. Lauren Daigle teamed up with Paul Mabury and Paul Duncan in penning the song while she was still on tour. The song’s lyrics provide a heartfelt message of relaxation and hopefulness, promising its audience that there is always someone who will hold on to you amidst tough times. Only that sometimes, that person is not a mortal human being. The song took the charts by a storm, rising to the peak of the Billboard Christian Songs Chart.

“Light of the World” is a Christmas ballad released a few months after her first album release. However, she featured another version of the song in her sophomore album Behold (2016) which features a collection of Christmas ballads. The song’s lyrics point Christians to praising the human incarnation of Christ, the Son of the Living God. Lauren Daigle teamed up with Paul Mabury and Paul Duncan once more over Skype in penning the lyrics to the song. The song peaked at number sixteen on the Billboard Christian Songs Airplay Chart.

Rarely do we pause in life to look back at the blessings that we have already received. However, “Love Like This” finds Lauren melting in awe for God’s love for everyone which to her is more than just a blessing. She questions God in the song what she has done to deserve His love. The song acknowledges that God loves us unconditionally. This lives on to be a mystery for human beings whose love for others might at one point be conditional.

“Still Rolling Stones” is one of the musical gems from Lauren Daigle’s album Look Up Child (2018). In an interview, Lauren Daigle revealed that the song reminds us that the things we presume are dead might come back to life. The hit brings the best of her vocals, helping redefine the feel of Christian/worship songs. “Still Rolling Stones” peaked at number four on the Billboard Christian Songs Chart.

Number six on our top 10 Lauren Daigle songs is the contemporary Christian ballad “Loyal.” The song is featured on the album How Can It Be (2015). “Loyal” is an inspirational hit that vividly shows aspects of the Lord God. This includes His all-knowing nature, endless love, and inviolate nature. The song exhibits how God remains a refuge for those faithful to Him at all times.

Lauren Daigle became the female artist with most top ten songs on the Billboard Hot Christian Songs after “Look Up Child” peaked at number three on the chart. “Look Up Child” is a Gold-certified album-titled ballad from Lauren’s third studio album. The album received a Grammy Award for the Best Contemporary Christian Music Album in 2019. This was her twelfth top-ten song on the chart. The song finds Lauren singing on the innocence of her babyhood, which aids her in retaining some passion for life.

“Rescue” is one of the best Lauren Daigle songs from her album Look Up Child (2018). The song is one of her most personal hits. Here, we find her singing about reassurance from God’s perspective. “Rescue” was penned for someone close to her when the friend was going through a tough time. The song would later be featured on one of the episodes of Gray’s Anatomy, an American drama series.

Lauren Daigle’s vocals in the song “How Can It Be” have seen her compared to the legendary singer Adele (only that her songs are inclined towards religion). She became the first female singer in contemporary Christian music history to strike two Gold singles from a debut album, one of which was “How Can It Be.” Lauren Daigle revealed that “How Can It Be” is one of the songs she turns to when she feels overwhelmed by problems. The song won the GMA Dove Awards’ Song of the Year in 2015. Lauren went on to win the GMA Dove Awards’ Best New Artist of Year accolade the same year.

After bagging wins with the lead single to the album How Can It Be (2015), Lauren Daigle went on to make headlines in the contemporary Christian music scene with other reputable singles. One of the big hits that followed is “Trust in You,” which was her first number-one song on the Billboard Hot Christian Songs chart. Lauren Daigle was surprised to see the song become one of her best, owing to her reluctant nature to feature it on her debut album. The song also managed a number twenty-three on the Billboard Bubbling Under Hot 100 Singles Chart.

Number one on our top 10 Lauren Daigle songs list is the inspirational hit “You Say.” The song is featured on the album Look Up Child (2018). “You Say” finds Lauren Daigle reminding us that her worth is in what the Lord God has to say about her. This calm and melodic hit helps eject the internal and external negative voices that inhibit a person from believing in their abilities. The song saw Lauren Daigle win the Grammy Award for the Best Contemporary Christian Music Performance/Song in 2019.