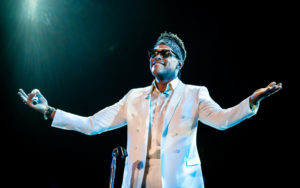 Gerald Maxwell Rivers, or more commonly referred to as Maxwell by the music industry and his fans, was born and raised in Brooklyn, New York by his widowed mother as his father died in a 1976 plane crash when he was just three years old. Before becoming a three-time Grammy award winner, Maxwell was a devout fan of what he classifies as Jheri-curl-soul music, a genre that owes its named credit to a hairdresser named Jheri Redding when he started a hairstyle trend among the African-American population in the 1980s that became a pop-culture staple for over a decade.

At the age of seventeen, thanks to receiving a keyboard from a friend, Maxwell taught himself how to play a variety of different musical instruments as he strove to embark on a career in the music industry. He combined the influence of the soul music that triggered his creativity with a bohemian style that would earn him a personal trademark of neo-soul music. Since 1996, Maxwell has released five studio albums, an extended play (EP), and eighteen singles. Out of those studio albums, his debut album, Maxwell’s Urban Hang Suite, became certified platinum by the Recording Industry Association of America (RIAA) twice over, as well as certified gold by the UK’s British Phonographic Industry. The next three albums, in order, each earned platinum certification as 1998’s Embria, 2001’s Now, and 2009’s BLACKsummers’night. The EP, MTV Unplugged, earned RIAA’s gold certification after it came out in 1997.

The soft, yet speedy guitar riff that served as the opener to “Get to Know Ya” is followed by a play of the trumpet before Maxwell’s neo-soul vocals sweet-talk its way into the groove of the music. R&B at its finest format, this song was the first single released from his third studio album, Now, in 2001. On the US Billboard Hot R&B/Hip-Hop Songs chart, it peaked as high as number twenty-two.

The fourth and final single from Maxwell’s platinum-certified album, BLACKsummer’snight, saw “Fistful of Tears” finish off 2009 with a powerfully soulful hit that served as an eye-opening masterpiece only the talented neo-soul artist could pull off. On the US Billboard Hot R&B/Hip-Hop Songs chart, Fistful of Tears peaked at number eleven. On the US Billboard Hot 100, it charted at number ninety-four.

In 2001, Maxwell released his third studio album, Now. “Lifetime” was the second single released from it, which charted as high as number five on the US Billboard Hot R&B/Hip-Hop Songs chart at number five. On the US Billboard Hot 100, it charted to number twenty-two. This synth-heavy, sensual song, featured Maxwell performing the neo-soul vocals he has personally trademarked. Lifetime is one of those songs where a listener can just close the eyes and get swept away in all its R&B glory.

The rhythmic intro of “Sumthin’ Sumthin'” grooves its way into the soulful lyrics delivered by Maxwell in a format that could take a listener a few decades back when the jazz of soft R&B classics dominated the charts by the likes of Kool & the Gang and other notorious artists that made the genre as popular as it has been. In 1996, it was released as the third single from Maxwell’s debut album, Maxwell’s Urban Hang Suite. On the US Hot R&B/Hip-Hop Songs chart, it peaked at number twenty-three. Sumthin’ Sumthin’ also became certified gold by the RIAA.

The incredible vocal talent delivered by Maxwell as he performed at his lyrical best, was instrumental in “This Woman’s Work” becoming such a powerful song. With nearly eighty million views on the official music video on YouTube alone, this once again proves the overall appreciation of the fans outweighs what the music charts suggest. On the US Billboard Hot R&B/Hip-Hop Songs chart, it peaked at number sixteen and on the US Billboard Hot 100, it charted to number fifty-eight. For nearly a full year, This Woman’s Work remained on the R&B/Hip-Hop Songs chart since its 2009 release. It was the second single that came from Maxwell’s highly successful third studio album, BLACKsummer’snight.

At the 2017 Grammy Awards, “Lake By the Ocean” won Best R&B Song, which served as one of three wins for Maxwell with the prestigious organization that recognizes the best work stemming from the industry’s finest. The heavy influence of R&B and soul from Maxwell sends one seductive wave of melodic delivery after another throughout the song, which understandably made it become a number one hit on the US Billboard Adult R&B Songs chart.

USA’s RIAA certified Maxwell’s single, “Ascension (Don’t Ever Wonder)” as platinum not long after it was released in 1997. It was the second single to come from his debut album, Maxwell’s Urban Hang Suite, and was the only song from the album to appear on the US Billboard Hot 100. It charted as high as number thirty-six on it. On the US Billboard Hot R&B/Hip-Hop Songs chart, Ascension peaked as high as number eight. The UK Hip-Hop and R&B Singles Chart took the song as high as number six. The charismatic groove from Maxwell’s vocal performance seemed to add that much soul to an already impactful R&B classic that rightfully earned its place in the hearts of music fans.

At the 52nd annual Grammy Awards ceremony, “Pretty Wings” was recognized in 2010 as Song of the Year. BLACKsummer’snight was Maxwell’s fourth studio album this hit single was featured on, which also won that year’s Grammy for Best R&B Album. The bittersweet love song that dwelled on the ill-timing of Maxwell’s performance of a man falling for the right girl during a most inconvenient time period served as one of those tracks many listeners could relate to at an emotional level. On the US Billboard Hot R&B/Hip-Hop Singles chart, it peaked at number one. On the US Billboard Hot 100, it charted to number thirty-three. It also earned gold certification by the RIAA by having over 500,000 copies sold.

In 1999, Life hit the movie theatres as a budding comedy. “Fortunate” was one of the singles that came from its soundtrack and was awarded Best Single of the Year by the Billboard Music Award, as well as Best R&B/Soul Single by a Male with the Soul Train Music Awards. To date, it is the most commercially successful single to Maxwell’s credit, as well as the highest-charting. On the US Billboard Hot R&B/Hip-Hop Songs chart, it peaked at number one. It also became certified gold by the RIAA as it currently has sold over 800,000 copies. Highly soulful, Maxwell’s vocals made Fortunate one of the most sensual songs he’s ever produced.