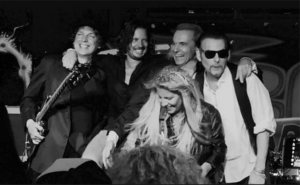 It’s not easy to find 80s American rock bands that would ideally suit the term ‘Cool” quite like Missing Persons. The band gained early exposure from MTV, which many attributed to the looks of Dale Bozzio, the band’s lead singer. However, hot looks only cannot take you far in music. Dale Bozzio and the rest of the band were great musicians also. Her other half, Terry Bozzio, was the band’s drummer. To say that he was one of the best drummers to ever sit on the throne would be an understatement. Long before the formation of the band, he had played for Frank Zappa and UK. Considering that Frank Zappa only hires the best drummers, you must believe that Terry Bozzio was good at his craft.

The band’s guitarist, Warren Cuccuuillo and the bassist Patrick O’Hearn were also former members of Frank Zappa, and Warren was a critical contributor to his 1979 album, Joe’s Garage. Missing Persons released their first album, Spring Session M, in 1982. The album, which was released to positive reviews from fans, presented a new wave of rock. Spring Session M was also commercially successful, peaking at position 17 on the Billboard 200 and earning gold certification by the RIAA.

Despite most singles from the album gaining considerable airplay on MTV, the band failed to capitalize on the exposure. Nevertheless, the band remains a defining rock band of the 1980s. Despite being called one album wonders, they have released five studio albums and one EP, and their latest album, Dreaming, was released in 20. However, none of the albums has matched or come close to matching their debut album, Spring Session M. We have compiled a list of the best Missing Persons songs that you will absolutely love. Here are the top ten Missing Persons songs.

Missing Persons 2020 album was a surprise release that will make you want to listen to it over and over again. Our number ten track in our list of the top ten Missing Persons songs is the track “Lipstick” which possesses an authentic sound that is of high quality. The song reminded us just how good Dale Bozzio’s vocals are. However, the song itself lacked the defining brilliance that was common in their earlier songs.

Coming in at number nine is the second track from one of the band’s most underrated albums. “I Can’t Think About Dancing” is a pop-rock ballad that would hold well in most of the current pop-rock songs. The track is fun to listen to and features catchy lyrics and a fantastic video to go with. Although the song was not a major hit because the band did little to promote the album, “I Can’t Think About Dancing” is one of the great pop songs from the 80s.

After an incredible debut album, Missing Persons had a lot of pressure to deliver on the second album. “Surrender Your Heart” is the fourth song from Missing Person’s second studio album, Rhyme and Reason. This beautiful song was quite a masterpiece that showed what the band could really do. The track features amazing vocals from Dale Bozzio which give the song an emotional pull. The melodic approach taken in the song was amazing, and the acoustic guitars complimented the keyboard tunes perfectly.

The number seven song in our list of the top ten Missing Persons songs is the song “Mental Hopscotch,” contained in the band’s 1986 album, Colour in Your Life. Unlike the majority of the new wave bands, Missing Persons had a heavier sound. The track contains some amazing drumming by Terry Bozzio who played the drums so enthusiastically. Dale’s vocals are equally impressive especially the chorus where she goes like, “mental hopscotch”. If you love 90’s and 2000s pop-rock, you need to listen to this track to appreciate what the 80s movement was all about.

Coming in at number six in our countdown of the ten best Missing Persons songs is the sixth track from their 1986 album, Colour in Your Life. “Hello, I Love You” is a beautiful cover for The Doors 1968 hit song from their album, Waiting for the Sun, inspired by a girl Jim Morrison met at Venice Beach.

Although this song never performed exceptionally well on the charts, it got a lot of airplay on the radio and gave the city of LA a new unofficial motto, “Nobody Walks in LA”. Although Terry Bozzio didn’t have an agenda with pedestrians in the city, the city has still not been able to shake up its 30-year-old punchline.

The number three song in our list of the top ten Missing Persons songs is another one from Spring Session M. The song features outstanding work from Terry Bozzio on the drums. “Windows” is a fantastic song that is timeless. The melodies are beautiful, and Dale Bozzio sings like an inspired version of Lady Gaga.

This track was initially released as a single before being included in Missing Persons debut studio album, Spring Session M. The song has been covered by a couple of artists such as Replicants and The Smashing Pumpkins. The song was used as a soundtrack in the popular game GTA Vice City Stories on Flash FM. The track is one of the band’s highest-charting songs, peaking at position 42 on the US Billboard Hot 100 Chart, where it spent 13 weeks.

Coming in at number one is the track “Words,” which is a fast song that is fun to play and listen to. The song perfectly captured the typical Los Angeles rock scene of the 80s. Warren Cucurullo’s ability to match the rhythm of his guitar with every other band member is impressive, and you can clearly see his strengths in this song. “Words” is a timeless song that will rock the club any day.