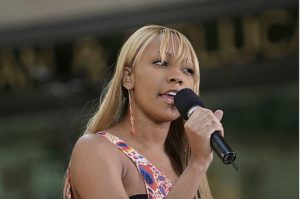 The hip-hop artist known as Monica was technically born Monica Denise Arnold on October 24, 1980, from College Park, Georgia. She is also the cousin to Christopher Ludicrous Bridges, who is best known for his rapping and acting talent. For Monica, the development of her musical talent began in early childhood as she performed with the gospel choir. It earned her enough recognition to sign her first record deal in 1993 with the independent label Rowdy Records, which is associated with Motown Records. At just fourteen years old, Monica’s debut album Miss Thang was released on July 18, 1995.

In addition to her singing and songwriting credit, Monica has also appeared as a guest on a number of series, including a couple of episodes where she appeared as herself on Beverly Hills, 90210. So far, Monica has released eight studio albums, eight video albums, and thirty-five singles. Three of the singles reached the top spot of the US Billboard Hot 100 charts consecutively between 1998 and 1999.

We open up our top 10 Monica songs list with the fantastic single “Why I Love You So Much.”  On the US Billboard Hot R&B/Hip-Hop Songs chart, “Why I Love You So Much” peaked at number three in 1996. The US Billboard Hot 100 charted it at number nine. It was the fourth out of five singles from Monica’s debut album, Miss Thang, that realized chart success. The album sold over a million copies in the US, which earned it a Platinum certification with the Recording Industry Association of America three times over. It also earned Gold certification from Music Canada (MC). Monica’s performance of this soft, romantic ballad inspired over 700,000 copies of it to be sold, which earned it a Gold certification from the RIAA.

If there is a song that can make someone emotional, “Before You Walk Out of My Life” could be the one to do it. The seductively sultry song was originally written for Toni Braxton, but later offered to Monica when it was left unused. On the US Billboard Hot R&B/Hip-Hop Songs chart, the song peaked at number one in 1995. It reached number seven on the US Billboard Hot 100, and at number twenty-two on the UK Singles Chart. The single also became certified Platinum by USA’s RIAA.

There are two versions to the song, “For You I Will.” The one is an instrumental piece while the other features Monica’s vocals. Both songs are featured in the 1996 motion picture, Space Jam, which starred basketball legend, Michael Jordan. The contemporary ballad merged the best of both music genres, namely pop and R&B, with the declaration of devotion to overcome personal challenges. The single became a globally charted success as it peaked as high as number two on the US Billboard Hot R&B/Hip-Hop Songs chart and at number four on the US Billboard Hot 100. It also became certified Platinum by US’s RIAA.

“Still Standing” was a duet performed by Monica and her cousin, Ludicrous, as a promotional single from her sixth album, also titled Still Standing. The song charted at number seventy-four in 2008. The album itself was not released until March 19, 2010. The song was performed together by Monica and Ludacris on the SOS Saving Ourselves – Help for Haiti Benefit program special that was aired in February 2008. The song was regarded as the best performance of the evening between the brilliance of the piano opening and Monica’s narrative and vocal note play and Ludicrous’ infamous rapping style, it was a soft beat, inspirational song that’s easy to catch onto. The powerful addition of Ludicrous’ performance served as an attention-grabbing notice to stand up without backing down, no matter what the challenge.

From the 2010 album, Still Standing, the single “Everything to Me” reached the top of the US Billboard Hot R&B/Hip Hop Songs chart in 2010. It charted on the US Billboard Hot 100 at number forty-four. Although the single was released in 2010, there is a throwback to an old-style soul music performance that could have this song just as easily sound like it was something that came out of the heyday of R&B music when it began to dominate the music charts in the 1970s.

Coming from Monica’s fourth studio album, After the Storm, which was released June 17, 2003, is the single, “So Gone.” Monica’s hip-hop performance style met with a hint of old-time R&B, which made this song a chart-topping classic. On the US Billboard Hot R&B/Hip-Hop Songs chart, it peaked at number one, as well as on the US Billboard Dance Club Songs chart. On the US Billboard Hot 100, the song charted at number ten. The playout of the song featured a crackle of an old record that gave the song an old 1970s feel that also seemed to match the vintage-style music play, as well as Monica’s vocal style.

The first single coming from Monica belonged to her debut album, Miss Thang, which was released on July 18, 1995. “Don’t Take It Personal (Just One of Dem Days) starts off with Monica singing without any musical backing, allowing the harmonic talent of her voice to grab the sole attention it deserved. When the mix of synthesizing instruments kick in, there is an old-style hip-hop style that comes through where the time-travel to an era the early 1990s when the genres of hip-hop and rap were reaching the height of public awareness of what was deemed as a new style of music at the time. On the US Billboard Hot R&B/Hip-Hop Songs chart, it peaked to number one. The US Billboard Hot 100 charted the song as high as number ten. The song also sold enough copies to become RIAA-certified Platinum, as well as certified Gold with Australia’s Recording Industry Association (ARIA).

Heartwarming and romantic, the single, “Angel of Mine,” was a number one hit on the US Billboard Hot 100 in 1999, which made it three times in a row Monica would realize a chart-topping hit. Angel of Mine is the third single from her album, Boy Is Mine, which was released on July 14, 1998. The soulful hit was also a favorite on the US Billboard Hot R&B/Hip-Hop Songs as it peaked second on its chart. Worldwide, like so many of her chart-topping singles, Angel of Mine would realize global success. In addition to being certified Platinum by US’s RIAA, it also became certified Gold with Australia’s ARIA.

“The First Night” was the second single released from Monica’s second studio album, The Boy is Mine. In 1998, the song peaked at the number one spot on the US Billboard Hot 100 and on the US Billboard Hot R&B/Hip-Hop Songs charts. It also charted at number six on the UK Singles Chart. Globally, The First Night realized chart-hitting success. RIAA certified the single at Platinum at what would be for the fifth time in Monica’s singing career. The song’s playout starts off with a soft rap that gives way to the soft, melodic vocal performance by Monica. Rhythmic and bluesy, The First Night throws hints of playfulness that made this song a sultry classic.

“The Boy Is Mine” is Monica’s most recognized hit single from her entire discography. Teamed with Brandy in the performance of this duet, this song was nominated for several music awards throughout the music industry. With the 1999 Grammy Awards, the song earned Best R&B Performance by a Duo or Group with Vocals. The Boy is Mine was certified double Platinum with USA’s RIAA, and single Platinum with Australia’s ARIA, Recorded Music New Zealand (RMNZ), and UK’s BPI. The song was also certified Gold with Germany’s Bundesverband Musikindustrie (BVMI). Brandy and Monica played off each other with their vocal performance, which offered a rhythmic stand-off between rivals fighting over a mutual love interest. The song has become a favorite standoff style song that is every bit as playful as it is harmonic.