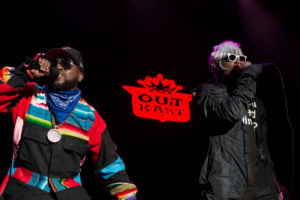 Our countdown of the top ten Outkast songs ranks the greatest songs from one of the most critically acclaimed and commercially successful hip-hop duos of all time. The hip-hop duo, which hails from Atlanta, comprises two talented rappers, namely Andre 300 and Big Boi. Their music is characterized by endless innovative creativity, memorable melodies, and intricate lyrics that are combined with some superior mic skills. Although the duo split up in 2006, they left us with an impressive catalog composed of some timeless hip hop classics. The duo went from performing as high school students in 1992 to gaining widespread fame after releasing their debut album, Southernplayalisticadillacmuzik.

The album was a typical Southern hip-hop record that featured repetitive hooks and Southern slang in the lyrics. Successive releases of ATLiens (1996) and Aquemini (1998) followed. In the year 2000, they released Stankonia, which featured some of their most popular songs such as “Ms. Jackson” and “B.O.B.” With six Grammy Awards under their belt. Here is our ranking of the top ten Outkast songs. m

The number ten song on our countdown is one of the strongest tracks on Outkast’s third studio album, Aquemini. In this song, the duo displays some impressive narratives that are seen through their rhymes. Big Boi tells a tale of his experience with a promiscuous lady, while Andre 3000 talks about a tragic tale of a woman whose adult dreams are crushed by the realities of the current world and drug addiction. The song features a magnificent beat that J.Cole sampled in his 2013 song, “Land Of The Snakes.”

“ATLiens,” is the second song and the title song from Outkast’s second studio album released in 1996. The song has a banging beat as Andre 3000 and Big Boi display some great rhymes in their verses. The song also has a perfect hook that perfectly sums up Southern rap with some incredible rhyming. The song was written and produced by Outkast themselves, and it appeared in the FOX series, New York Undercover.

“Babylon,” is the eighth track from Outkast’s 1996 album, ATLiens. The song features some outstanding verses from the duo over a menacing beat as they talk about street life and the religious attitudes towards sex. Big Boi’s verse in the song is quite impressive, although not so good in terms of entertainment, as he raps about the death of his aunt, with whom they had a close relationship.

“Player’s Ball” is the single that launched Outkast’s career and gave them mainstream attention. The song gives insights into how life in the South is like and the influence that the hip-hop culture had on them while growing up. Andre 3000 goes in on the first verse in the song with a great beat, which features uncredited Sleep Brown vocals in the hook. The song’s title refers to a traditional gathering of pimps in Atlanta which the duo attends on Christmas Day.

“Hey Ya!” stands as one of the most popular Outkast songs ever released. Its has such an captivating and addicting groove. Even if your not a fan of hip hop music, you can’t help but liking this song just a little bit. The lyrics to this one are pretty interesting and at times somewhat dark as the song looks at relationships and some of the very sad issues that arise from people staying together longer than they should have or still do.

Coming in at number five on our list of the top ten Outkast songs is the sixth song from their 1996 album, ATLiens. In the song entitled “Elevators,” the duo rap about their journey in the hip hop circle from humble beginnings to one of hip hop’s best acts with the success of their debut album, Southernplayalisticadillacmuzik. The song has a catchy hook and a great final verse from Andre 3000, which gave the song massive popularity.

he number four song on our countdown of the top ten Outkast songs is the title song from the duo’s debut album entitled Southernplayalisticadillacmuzik which was released in 1994. You should throw that word in your next spelling bee competition. The song, just like the rest of the album, was impeccably produced, and it is incredible how underrated Organized Noize was as a production team. The track has a fantastic beat and features Big Boi in the first verse while Andre 3000 goes in on the second verse. The track also has a catchy hook that is so smooth. Just love this track.

Coming in at number three is another gem from the duo’s 1998 album, Aquemini. The track was inspired by the story of Rosa Parks who refused to surrender her seat to a white passenger back in 1955 in Montgomery, Alabama. The incident sparked a massive Civil Rights Movement across America. The track contains a harmonica-led breakdown that is synonymous with the South and some foot-stomping and hand clapping. The song led to a controversial lawsuit against Outkast, filed by Rosa Park’s legal team although her team ultimately lost the case.

As we get close to the number one spot on our top 10 Outkast songs list we turn to this fast-paced single entitled ‘B.O.B (Bombs Over Baghdad),” was released by Outkast in 2000 from the album Stankonia was a monster single and one of the most outstanding in the album. The song talks about life in the ghetto while referencing a few political points to get the message home. The song contains some great instrumentation which features drums, bass, and amazing gospel vocals. Although it was not a huge commercially successful song, it is widely regarded as one of Outkast’s greatest hits.

The number one song on our top 10 Outkast songs list entitled “Ms.Jackson,”  was inspired by Andre 3000’s relationship with Erykah Badu and her mother. According to Erykah Badu, Andre 3000’s verses in the song hit a sore spot in her with lyrics that were so inspiring. The song basically talks about how breakups affect couples and how a lady’s mother can have so much hatred toward the ex-husband or ex-boyfriend. The song also won a Grammy Award for Best Rap Performance by a Duo or Group at the 2002 Grammy Awards.