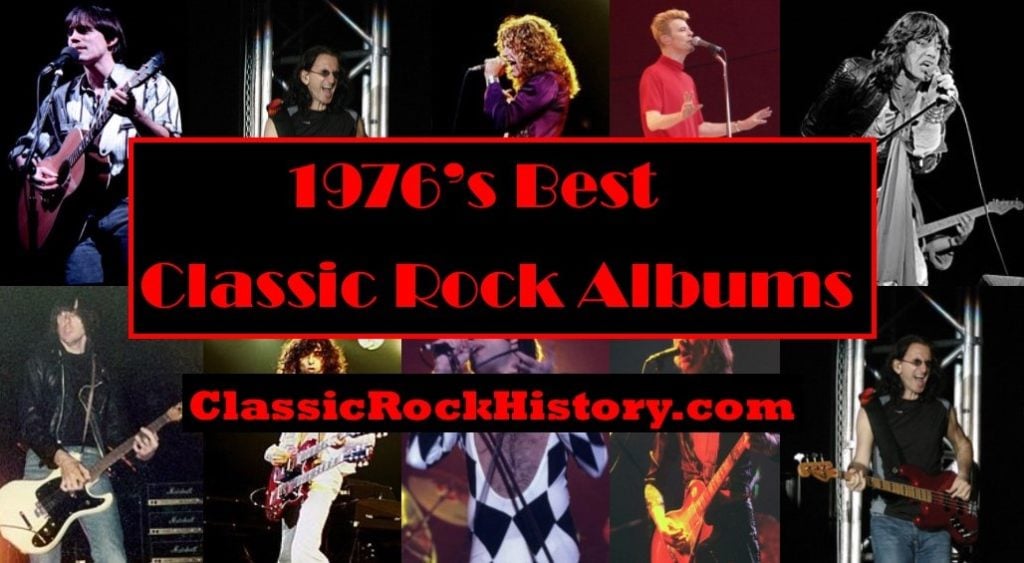 Oh for the love of your rock and roll shoes, these 1970’s albums list are getting so hard to do. Our 1976’s Best Classic Albums list defines another outstanding year in classic rock history. As in 1975, the playing field has evened out as so many artists released great rock and roll records. A good majority of our favorite albums and the most commercially successful records of 1976 were debut albums. Groups like Boston, Tom Petty and the Heartbreakers,The Ramones, The Runaways and Heart all released their debut records.1976 was also a great year for legendary live albums which we have included on this list from groups such as Led Zeppelin, Lynyrd Skynyrd, and Rush We hope you enjoy this ride back into the 1970s as this one focuses on the great year of 1976. Just another great list to knock you out.

# 38 – Tom Petty and The Heartbreakers

That album titles seemed like such an old age when your were a 14 years old buying this album.

An album filled with great Paul McCartney songs, but burdened with tracks written by the groups other musicians.

Could never get enough of Robin Trower.

Never a bad album from Joni. Another brilliant work of art.

The great band from Ireland released the song of the summer of 1976 with the track “The Boys Are Back In Town.” However, the album was filled with so many more great rock tracks from one of the legendary classic rock bands of all time.

The genius of Frank Zappa just continued to release stunning rock records that were so brilliantly beyond what anybody else was doing at the time.

This amazing two record set defined the legend of Lynyrd Skynyrd in concert so well. One of the best live albums ever released from our beloved band.

The first of two albums from the Steve Miller Band that yielded many blues based pop rock gens that were constantly played on the radio.

A fitting follow up to A Night At The Opera. The album’s opening track “Tie Your Mother Down,” stands as the best song on the record and was an amazing concert opener on the bands 1976/77 tour.

Our second favorite Steely Dan album after AJA. Over time this albums just keeps getting better as it is so deep. The guitar solos are killer.

The debut albums of one of rocks most groundbreaking bands. This one blew us all away. It still does.

Elton John’s most underrated album of his career. This is a fabulous two record set.

An amazing follow up to Toys in the Attic. One of Aerosmith’s best albums. We ranked it number one on our Aerosmith albums list

Our favorite Kiss album of all time….”Detroit Rock City,” stands as one of the best album opening tracks ever.

Led Zeppelin opens up top 10 section of our 1976’s best classic rock albums list. The Song Remains the Same was the first live Led Zeppelin album ever released. However they claimed it wasn’t a live album but rather a movie soundtrack. It didn’t matter what they called it. Led Zeppelin was the greatest rock and roll band I’ve ever seen on the concert stage. It was great to finally have a live album by the band.

A new era of Rolling Stones music began with the addition of Ron Wood to the band on the fantastic Black and Blue album. Probably one of the Rolling Stones most underrated albums.

The album that broke all record sales and turned Peter Frampton into one of the biggest rock stars  of the decade. Such and incredible live album that defined Frampton’s talents. The songs on the live album blew away his studio versions

This was the Rush album that turned the band into a household name. I will never forget the day I walked into a record store in 1976 and brought this album just because I thought it had a cool cover without having never heard the band before. Best decision ever!

An amazing record by the progressive rock band Kansas featuring one of the most famous classic rock songs of all time entitled “Carry On My Wayward Son.” Every song on the album was a masterpiece.

Heart’s debut album had been released in 1975 in Canada so we have included it on both the 1975 and 1976 lists. Nonetheless, the album contained a pair of songs in Magic Man and Crazy On You that would become staples of classic rock radio for years. This one was constantly on our turntables in the 1970s and beyond

The Eagles Hotel California came out very late in the year in December of 1976. It turned out to be one of the biggest albums of 1977. However since it was released in 1976 we included it on this list instead.

Boston’s debut album is often hailed as one of the greatest debut albums of all time. We were all blown away by the sound and all the great songs on the record, especially the albums’ incredible A Side. Tom Scholz never came close to releasing another Boston album like this one. Unless you have released an album called Dark Side Of The Moon or Hotel California, its tough to top a Led Zeppelin album on this website; Boston did it.

Look into the Future – Journey

Give Us a Wink – Sweet

Here and There – Elton John

Young and Rich – The Tubes

Tales of Mystery and Imagination – The Alan Parsons Project

Year of the Cat – Al Stewart

Whistling Down the Wire – Crosby & Nash

In the Pocket – James Taylor

Diamond in the Rough – Jessi Colter

More Than Ever – Blood, Sweat & Tears

No Reason to Cry – Eric Clapton

Long May You Run – The Stills-Young Band

Jump on It – Montrose

Made in Europe – Deep Purple

Some People Can Do What They Like – Robert Palmer

Rock and Roll Over – Kiss