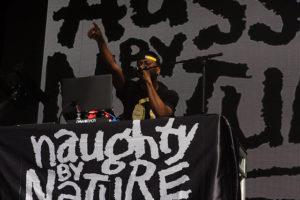 I’m always surprised when I fail to see Naughty by Nature’s name among the best hip-hop acts ever. They’ve always seemed to be an afterthought in the conversation, although they had a major cultural impact on the hip-hop scene back in the day. What impressed me most about Naughty by Nature is their ability to be successful on the charts and remain credible in their raw hip-hop abilities. The group was composed of three East Orange kids whose musical dreams eventually teamed up to create the legacy of Naughty by Nature.

Their hit song, O.P.P, saw the group become a mainstream hip-hop act, and it also became one of the most successful rap songs in music history. The trio has released seven studio albums over the course of an incredible career and have gained a reputation for unforgettable live performances. Their competitive spirit combined with their talent and work ethic also saw them win a Grammy Award for Best Rap Album in 1995. In this article, we take a look at the ten best Naughty by Nature songs.

Coming in at number ten is the second song from Naughty by Nature’s self-titled album. The track has some amazing lyrics about a fatherless boy who is forced into crime to make ends meet. The song features a drum loop from the 1973 song by Lafayette Afro Rock Band, “Hihache.” From the song, you can tell that Treach influenced many rappers, including Eminem, through his rap speed and incredible storytelling skills.

“Holiday” was the last song that Naughty by Nature released via Arista Records in October 1999. Although their tenure at the record label was short-lived, it did yield some fantastic tracks such as this one. The track uses a slowed-down sample of the 1980 dance hit song, “A Lover’s Holiday.” Although the track didn’t chart on the US Billboard Hot R&B/Hip-Hop Singles & Tracks, missing out narrowly, it did peak at number one on the Bubbling Under R&B/Hip-Hop Singles Chart.

Naughty by Nature’s self-titled 1991 album clearly put the spotlight on Treach, which o many, was an album weakness to many. Thankfully in this track, the female contributions of Queen Latifah make this song a great listen and one of the best tracks on the album. “Wickedest Man Alive” samples Billy Squier’s 1980 song, “The Big Beat.
The track has a great groove, and Treach’s lyricism is on another level.

Naughty III was one of the most anticipated album releases in 1993. Although it wasn’t quite as good as their previous albums, it still served us with some excellent treats. The second track on the album saw Treach and Vinnie rap over a horn-heavy loop from the 1961 track by Donald Byrd, “French Spice.” In this track, we get to see one of the finest Treach raps in the album as he spits some rapid-fire lyrical barrages. “It’s On” is also one of two tracks in the album that were co-produced by S.I.D.

The number six track on our countdown of the best Naughty by Nature songs was recorded as a soundtrack for the 1992 movie, Juice. However, the song was included in Naughty by Nature’s 1991 self-titled album. The track has a catchy chorus that goes like, “We gonna break, we gonna bash, we gonna roll, we gonna smash. The song has been sampled by Jermaine Dupri for the Jagged Edge song, “Shady Girl,” and also by Tupac. It was also used as a soundtrack for the 2016 game Watch Dogs 2.

Littered with great wordplay and assonance from Treach, “Yoke the Joker” takes the number five spot on our countdown of the top ten Naughty by Nature songs. The track is contained in Naughty by Nature’s self-titled 1991 album. The track remains to be one of the most popular songs on the album, and it still remains as fresh as it was when it was released three decades ago.

“Jamboree” is one of the highest-charting Naughty by Nature songs. The track was released in 1999 and featured a chorus from the American R&B duo Zhane. The track features a great beat from Kay Gee, which samples a percussion loop from Earth, Wind & Fire’s 1979 song, “On Your Face,” as well as a horn riff from Benny Golson’s 1979 song, “I’m Always Dancin’ to the Music.” “Jamboree” is a feel-good song that could get people at any party jumping to it. The song peaked at position ten on the US Billboard Hot 100 and number one while also spending five weeks at the top of the Canadian RPM Dance Chart.

In this song, Treach’s lyrical talent and flow are evident, with him being the sole rapper in the entire track. In the song, he brags about how good he is on the mic that only veterans in the rap game can understand how good he truly is. The track has a video that features Treach close to a swimming pool and the ocean in the midst of a heatwave. The song peaked at position 17 on the US Billboard Hot 100 and was featured in the American musical film 8 Mile.

Coming in at number two is one of Naughty by Nature’s most famous anthems alongside “Hip Hop Hooray.” “O.P.P” was released in 1991 from Naughty by Nature’s 1991 self-titled album with the song’s phrase, “down wit’ O.P.P,” becoming a popular catchphrase in the US during the early 90s. The song’s lyrics talk about infidelity, which was all too common in American society. “O.P.P” is also one of the first songs to crossover to pop radio, and the video of the song on MTV Raps show, Yo!

The top song on our countdown of the greatest Naughty by Nature songs is one of their most recognizable songs and a track that has also had an immense cultural impact on American hip-hop culture. In the song, the rappers talk about their love for hip hop and their obsession with beautiful women. The song has a contagious melody, and Treach’s rhymes are quite clever. The track also has a magnificent hook which made it a big hit.