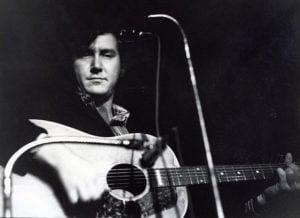 Our top 10 Phil Ochs presents the best songs of one of the most important rock and folk music voices of the 1960s. Born in 1940, Phil Ochs’ glory on the microphone and stage as a singer would come later after quite an ambitious and interactive lifestyle. Phil Ochs would attend medical school only to be sent overseas near the end of World War II to treat wounded soldiers. The battlefield might be the place for passionate and loyal soldiers, but not Phil Ochs, who experienced mental health issues due to the war experiences. Bipolar disorder saw Phil Ochs receive an honorable medical discharge, after which he would barely establish a successful medical career.

Moving to New York with his family had Phil Ochs study music for the first time, where he would receive compliments from his music instructor. The music instructor regarded him as a gifted clarinet player thanks to his ability to transfer his musical feelings to his instruments. This saw him play the clarinet at the Capital University Conservatory of Music. Here, Phil Ochs rose to the principal soloist status, which had him pursue his love for music even more. Phil Ochs loved rock and country sounds from artists such as Elvis Presley, Buddy Holly, Johnny Cash, Faron Young, and Hank Williams Sr.

His pursuit of competence in journalism had him meet a fellow student, Jim Glover, who was passionate about folk music. The two had much to exchange in the music scene. While Glover introduced Phil Ochs to music by artists such as Woody Guthrie, Pete Seeger, and The Weavers, Phil Ochs showed Glover how to play the guitar. Politics and music articles were his primary writings as a journalist having him write for an underground newspaper, The Word. It is here that Phil Ochs established his love for topical political songs.

A music career for Phil Ochs would soon start after he collaborated with Glover to form the duet The Sundowners. While the two broke up before any professional performance, The Sundowners gave the two the chance to establish their careers with some skills. Glover went on to become a folk singer with Phil Ochs opening for Smothers Brothers in some local folk clubs. It was there Phil Ochs met with Bob Gibson, who he termed as his seminal influence in songwriting.

Phil Ochs would begin his professional music career as an unpolished but enthusiastic singer. His music always pointed at the then-current events such as labor struggles, war, and civil rights. This led to some referring to him as a protest singer. However, Phil Ochs saw himself as a singing journalist who delivered topical songs built from reads in Newsweek. Soon, Phil Ochs would rub shoulders with legendary artists such as Bob Dylan, Joan Baez, and Tom Paxton in folk festivals. In his short career, Phil Ochs recorded at least two hundred and thirty-eight songs having some of his best releases covered by scores of artists such as Ronnie Gilbert, Bastro, Joan Baez, Christy Moore, Eddie Vedder, and John Denver. Here are the top 10 Phil Ochs songs.

Ushering us to the top 10 Phil Ochs songs is “Chords of Fame.” The song is one of the insightful ballads from this transgressive folk singer having its lyrics alluding to how fame interweaves with music.

Through his fame, Phil Ochs gained some perspective about success and greatness, channeling his thoughts through the song “Chords of Fame.” He went on to state that the more success one amasses, the more they are likely to fail. Did he really make sense with that, or can we conclude that this was just his path alone? Soon after, we know that Phil Ochs became more reclusive, falling into depression and later committing suicide at age thirty-five.

“There but for Fortune” is a superbly penned song thanks to Phil Ochs’ journalistic competence. His biographers noted that this song carries with it Phil Ochs’ humanity in a nutshell. Thanks to its four verses that describe a prisoner, a hobo, a drunk man, and a bombed nation, respectively,  Phil Ochs captured the attention of many with it. “There but for Fortune” is one of the most covered Phil Ochs’ songs of all time, performed by notable names such as Sammy Walker, Jim and Jean, Chad and Jeremy, The Spokesmen, Joan Baez, and Cher.

Joan Baez’s version was the most epic among the covers, having it nominated for a Grammy Award for the Best Folk Recording prompting Phil Ochs to ironically refer to it as her hit single.

Ask Phil Ochs, and he will tell you the impacts of war. Before venturing into the music career, he faced the wrath of war by suffering mental problems while serving as a medic in World War II. Phil Ochs released “The War is Over” on his album Tape from California in 1968. The song is best known as a harsh critic of the American military-industrial establishment and the Vietnam War. Some have regarded the song as the most potent anti war song of the 1960s.

Away from Phil Ochs’ harsh critics of the American military-industrial establishment, here is a patriotic song he released on the album All the News That’s Fit to Sing. “The Power and The Glory” is a patriotic anthem known for blending the American dream and altruistic religious ideals. “The Power and The Glory” has been covered by many artists such as Anita Bryant, Pete Seeger, Theodore Bikel, Clem Tholet, and Ronnie Gilbert.

“Love Me, I’m a Liberal” is a popular Phil Ochs songs from his live album, Phil Ochs in Concert. The concert staple is a satirical release known for its criticism of liberals. The song takes a dig at liberals, having most of them support civil rights to paint compassion only to have them reject any action that would change the status quo. “Love Me, I’m a Liberal” critiques liberalism from a leftist stance through the adoption of a satirized point of view of a 1960s American liberal. The song has been covered (with updated lyrics) by notable artists like Oscar Brad, Chris T-T, and Nacho Vegas.

#5 – Here’s To The State of Mississippi

The “singing journalist” delivered “Here’s to The State of Mississippi,” on his album, I Ain’t Marching Anymore. Best known for his anti-war and freedom ballads, Phil Ochs released this civil rights protest song to critically analyze Mississippi’s social and civil structures. The song criticized the oppression of African-Americans in bold, citing inequality of races, segregation, frequent murders, and biased school systems. Only a few artists would take bold steps like Phil Ochs having him release “Here’s to the State of Richard Nixon,” borrowing from “Here’s to The State of Mississippi,” a song he used to reflect criticisms about Nixon’s administration.

“Draft Dodger Rag” has been regarded as one of Phil Ochs’ Vietnam War protest ballads. The satirical anti-war song was featured on his album I Ain’t Marching Anymore (1965). Soon after its release, the song would become an anthem of the anti-Vietnam War movement. Phil Ochs composed the song from the perspective of an energetic young man who had been drafted. Upon reporting to duty, the young man cites a list of causes why he can’t really be of help on the battlefield. As the war ends, the young man tells his commanders that he’d be the first to take part in a war without blood. The song has been covered by many artists such as Pete Seeger, The Four Preps, David Rovics, Tom Paxton, and Chad Mitchell Trio.

Would Phil Ochs remain relevant in the folk music scene without singing about political matters and rights? He answered this through his release “Changes” on his album Phil Ochs in Concert. Unlike most of his songs that take a political stance, “Changes” was more of a personal release about love. The song brings on some haunting melodies adding to the song’s greatness. “Changes” was covered by notable artists such as Eric Andersen, Cilla Black, The Brothers Four, Julie Felix, Ian & Sylvia, and Jim and Jean.

Number one on our top 10 Phil Ochs songs list is the ballad “When I’m Gone.” Was Phil Ochs already giving us a foreshadow of what would later befall him? Poetic it might feel, but the fact that he states that we won’t find him singing on this song when he’s gone makes one feel like he knew what he was up to. However, this claim may be disputed by the fact that his suicide came after nine years of releasing this song. Nevertheless, it feels sad that we lost such an iconic artist who even knew that we would miss him “When He is Gone!” The hit was released as the last song in his album Phil Ochs in Concert (1966).