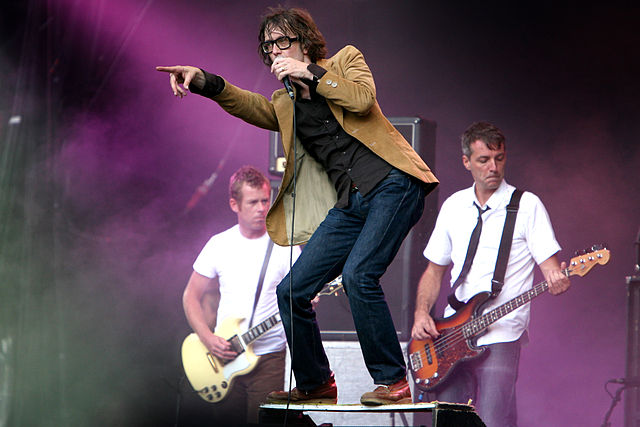 Despite considered to be one of the big four of nineties Britpop along with Oasis, Blur and Suede, Pulp were around long before that, having first formed in 1978. During the heyday period of 1992 to 1997, the line-up consisted of vocalist Jarvis Cocker, keyboardist Candida Doyle, guitarists Russell Senior and Mark Webber, bassist Steve McKay and drummer Nick Banks.

The band found very little success during the first decade of their existence, emerging out obscurity with 1994’s His and Hers which was followed a year later by Different Class which got to number one in the Uk. This album featured the band’s signature song “Common People” which got to number two on the UK singles chart. The band were known for their lyrical observations on northern English life, which came from an influence from British social realist film and literature. They were very popular and successful during the Britpop era, being nominated three times for the Mercury Prize and winning it once.

In 2001, Pulp went on a ten-year hiatus. They reunited in 2011, after which they played several of the UK’s biggest music festivals. However, they split up again in 2013.

Kicking off this Pulp Songs list we have a song that was the title track of the band’s comeback album released in 2013. The song had originally been demoed during the recording of the band’s previous album We Love Life which was released in 2001. After being left unfinished and unreleased for over a decade, the band came back to it after their reunion. Originally released as a download-only track, it reached number 101 on the UK singles chart.

This track is taken from 1995’s Different Class. The album was successful both critically and commercially and as previously stated reached number one on the Uk album charts and was the album to win the Mercury Music Prize out of the three times that the band were nominated for it. It has been made platinum four times, selling over 1.32 million copies in the UK as of 2020. To this day it is highly acclaimed as a classic of its genre.

This track is taken from This is Hardcore released in 1998. Coming out three years after Different Class, it was much anticipated upon its release. For the most part, it proved to live up to expectations, being very well received and it is even now considered to be something of a classic album. It also got to number one on the UK albums chart and charted high in several other countries across the world.

Here we take a trip back to the band’s more obscure early days with this track that was the second single to be taken from their third album Separations released in 1992. Apparently this song is about the frustration that the band were experiencing at the time due to having been around for fourteen years and achieving no mainstream success (or much success of any kind for that matter), little where they to know that what they wanted was just around the corner.

Here is a successful but controversial single taken from Different Class. The title comes from something that Cocker overheard someone saying whilst attending a rave, and the song is about how Cocker felt that drug culture was generally hollow and artificial. Due to this subject matter, several British tabloid newspapers attacked the song. However, this controversy proved to not do the song much harm, as it reached number on the Uk singles chart.

This song was the second single to be taken from the 2001’s We Love Life. It reached number twenty-seven on the Uk singles chart. It is notable as being the final single before the band’s hiatus. Also notable was the song’s promo video which did not actually feature the band themselves playing the song. Instead, a number of musical celebrity lookalikes sang different lines of the song in the style of the star that they were impersonating.

Yes, it’s not at number one but it’s still fairly high on the list. The lead single off Different Class, it reached number two in Britain and along with Oasis’ “Wonderwall” and Blur’s “Parklife” became one of the defining songs of the Britpop era and Pulp’s signature song. Lyrically, the song tackles the issue of class division, specifically the idea of the British middle class romanticising the idea of poverty and being strangely envious of people who live in it.

This song is another single from the band’s early days released in 1993. Cocker wrote the song about an ex-girlfriend, who then goes on to lead a dull life after dumping him. It was the final single from the band to be released on Gift records and it reached number eighty on the Uk singles chart. Although it was not originally included on an album, it has since appeared on a number of reissues and compilations.

Just off the top spot is another of the band’s biggest singles taken from 1994’s His n Hers. The song caused some minor controversy upon its release due to its lyrical content, which I will not go into with this site being content-restricted. As the second single from the album, it reached number thirty-three on the Uk charts, making it their first top forty hit. The songs has been very critically acclaimed over the years.

At the top is another one of the band’s biggest hits and once again taken from Different Class. The title refers to the fact that the song is slightly disco influenced. Lyrically, it is about a childhood friend of Cocker’s named Deborah Bone who he had a crush on throughout his youth but the feeling was never reciprocated. Released as a single in 1995, it reached number seven on the Uk charts. It is another track that received much acclaim over the years.