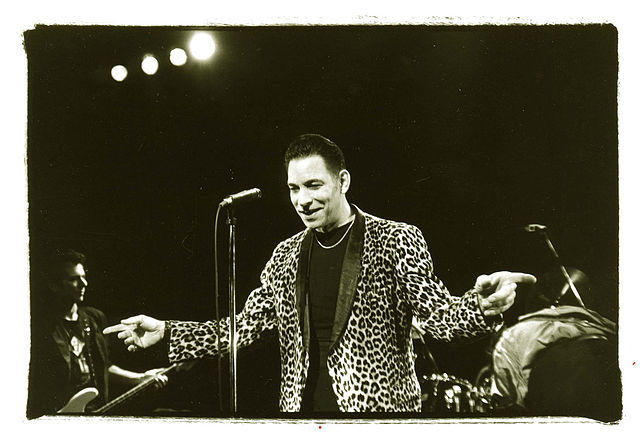 Our Top 10 Robert Gordon Songs list looks back at the career of a great rock and roll singer that specialized in rockabilly and was clearly inspired by Elvis Presley. Robert Gordon’s career began as a member of the  band The Confidentials at the young age of 17. After moving to New York he joined the punk band the Tuff Darts. The band appeared on the legendary double album Live at CBGB’s. Robert Gordon’s vocals performance with the Tuff Darts led him to record a solo album in 1977 with the famous rock guitarist Link Wray. The album turned a lot of people onto the pairing of Robert Gordon and Link Wray. The hype over the record led to a second album entitled Fresh Fish Special. With the release of that spectacular album, Robert Gordon became a critic’s favorite and developed a cult following on the East Coast of the United States.

After working with Link Wray on his first couple of albums, Robert Gordon would pair up with Chris Speeding on future recordings. Robert Gordon also worked with the great Danny Gatton. Over the years, Robert Gordon has released over twenty albums when counting studio albums, live records, compilations and international releases. He remains an icon of rockabilly and a true artist dedicated to the art of pure rock and roll that came out of the 1950s. Our top 10 Robert Gordon songs list looks to present some of our favorites with hope that those reading this article will diver deeper into the great Robert Gordon catalog.

This great song “Besides You,” recorded by Robert Gordon was released on the album All For The Love Of Rock N Roll. The album was released in 1994 on Viceroy Records. This is one of those lost rock and roll gems. Its a fantastic song written by Iggy Pop. Robert Gordon delivers big time vocals on this one. The sound of the drums and guitars just bleed rock and roll. The song just builds and builds in energy and passion as it hits you straight between the eyes, the heart, the lungs all the way down to your rock and roll socks. Yeah baby, that’s what I’m talking about!

Robert Gordon laid out his own unique touch on the classic blues song “Drivin’ Wheel.” The song was released on the Robert Gordon album entitled Are You Gonna Be the One. The album was released in 1981.  “Drivin‘ Wheel,” was written by T Bone Burnett and Billy Swan.

Many music fans know the great song “Someday, Someway,” as Marshall Crenshaw’s signature song. However, take a listen to the great Robert Gordon version and then decide who do you think owns the ultimate version. The song was released on Robert Gordon’s album Are You Gonna Be the One. That great record was released in 1981.

Many Robert Gordon fans point to his grand album Rock Billy Boogie  as his finest record. The album was released in 1979. It was his first album to be released on RCA Records. The same label Elvis Presley recorded for. The song “It’s Only Make Believe,” was released as the album’s first single. The song was written by Jack Nance and Conway Twitty.

For those who don’t know the story, Bruce Springsteen had composed the song “Fire,” with hope that Elvis Presley would record it. However, Elvis Presley died suddenly before getting a chance to hear it. Nonetheless, Robert Gordon took the song and delivered his own great version of the song on his second album with Bruce Springsteen playing piano on the song. It was a smart move because many Springsteen fans sought out Robert Gordon’s version opening Gordon up to a much wider audience.  Inevitably, it was the Pointer Sisters who would have the biggest commercial success with the song. Still, it was Robert Gordon’s version that realized Springsteen’s original intent as a tribute to Elvis Presley .

We close out our Top 10 Robert Gordon songs with a song that simply best defines the artistry of Robert Gordon. “Rock Billy Boogie,” is a wonderful musical testament to the art of Rockabilly. All the great great 50s rock artists are represented in the music if you just sit back and listen. You can hear Elvis Presley, Buddy Holly, Chuck Berry, Bill Haley and so many more. Its in the rhythms, the sound of the instruments, the arrangements and of course the golden vocals of the great Robert Gordon. The song was written by John and Dorsey Burnette. It was released on the album Rock Billy Boogie released in 1979.