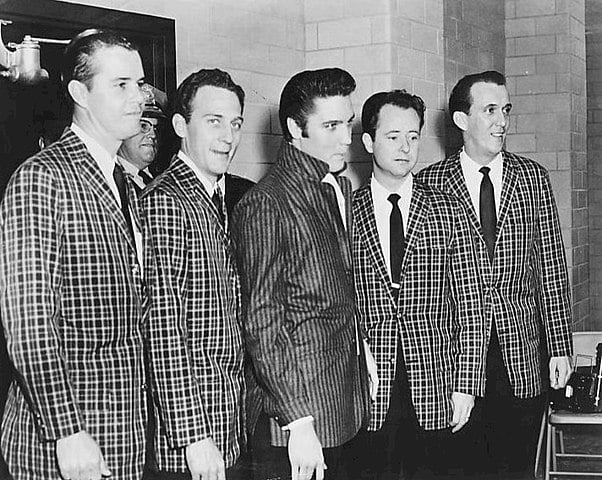 Photo credit at end of article.

The Jordanaires worked with many other classic artists including a nice three year run with Patsy Cline from 1960 to 1963. The group also recorded with Ricky Nelson, Johnny Cash, Cliff Richard, Ringo Starr, Jim Reeves, Marty Robbins, Bobby Bare, Don McLean, Dolly Parton, and even bands like the Blasters and Chicago. The Jordanaires were a busy backup vocal group over the course of 25 years. They worked every day in the studio often up to four sessions a day. The Jordanaires sung on over thirty thousand recordings. They defined the concept of working musicians.

We open up our Jordanaires songs list with a track that features the Jordanaires right from the song’s opening beat. Because The Jordanaires were featured on almost all of Elvis Presley’s recordings, it was tough to choose which ones to include on the list. However this one just felt right. The song “Don’t,” was released in 1958. It went straight to number one on the Billboard Top 100.

Continuing with our 10 best Jordanaires performances on record we turn to a classic Patsy Cline song entitled ‘Yes, I Understand.” The Jordanaires are all over this one. The group must have been very enjoyable to work with because no one ever wanted to stop working with them.

# 8 -Too Much Monkey Business

On this classic Johnny Cash song, the Jordanaires take the lead vocals at the song’s start setting up the scene for the legendary deep voice of Johnny Cash. The song “Run Softly, Blue River,” was released on the album The Fabulous Johnny Cash in 1958. It was only the second studio album that Johnny Cash had released at the time.

We wonder how many people remember this song. It had one of those hooks that transcended into culture on many levels. Big Bad John! With that deep voice and amazing backing vocals by the Jordanaires, this one was a real classic.

Loretta Lynn is one of country music’s all time legends. She was loved by millions not only for her voice  but also for her brilliant songwriting skills. Loretta Lynn penned this classic song entitled “Coal Miner’s Daughter.” The song was released in 1970. It featured the Jordanaires on backing vocals. The song went straight to number one on Billboard’s US Hot Country Songs in 1970.

Ricky Nelson’s Travelin Man,” was one of the biggest songs of his career. He was one of the biggest teen idols of the late 1950s and 60s. He had a huge following and made multiple television appearances. He even co-starred with John Wayne in the classic western Rio Bravo. He had so many hits in 1958,  he even outdid Elvis Presley on the charts in 58 and 59. He latched onto The Jordanaires for this one earning himself a number one record with “Travelin Man,” and the Jordanaires right alongside him.

Patsy Cline’s “Crazy,” stands as one of the most popular recordings of all time. This legendary song was released by Patsy Cline and the Jordanaires. The song was released in 1961. “Crazy,” became a top 10 hit on the U.S. Billboard Hot 100. The song went all the way to number two on the US Billboard Country Charts. However, it’s the legacy of the song and how it has consistently infiltrated pop culture over the past 60 years that defines just how brilliant this recording was by the Jordanaires and Patsy Cline.

Feature Photo: Press Department, Capitol Records. While Elvis was signed to RCA Victor, the Jordanaires made recordings of their gospel music on their own, without Presley. They produced some albums for Captiol over a long period of time., Public domain, via Wikimedia Commons