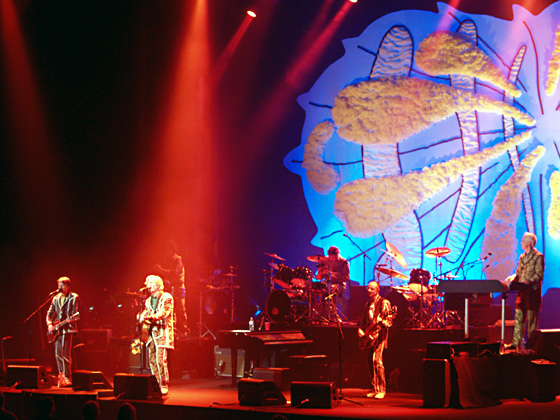 Our Top 10 Split Enz Songs list takes a look at one the most popular bands to ever come out of the country of New Zealand. The band rose to fame in the mid to late 1970s and continued on with a nice string of hits into the 1980s. The origins of the band began in the early 1970s when it was founded by Tim Finn and Phil Judd. After struggling to find success in New Zealand in the early 1970s, the band moved to Australia in 1974.  A year later in 1975, Split Enz released their first album. The album was entitled Mental Notes. It featured musicians, Timothy Finn, Philip Judd, Jonathan Michael Chunn ,Noel Crombie, Emlyn Crowther, Eddie Rayner, Wally Wilkinson, David Russell and Robert Gillies. All the songs on the band’s debut album were written by Tim Finn and Phil Judd.

Split Enz followed up their debut album a year later in 1976 with the album entitled Second Thoughts. The title is appropriate because the album contained a few of  he songs from their debut album that the band had wanted to re-record. The album was produced by legendary musician Phil Manzanera of Roxy Music. The band released their third album minus Phil Judd in 1977 entitled Dizrythmia. Split Enz’s fourth album was released in 1979 entitled Frenzy. By this time, most of the songs on the record were written by Tim Finn.

In 1980, the band Split Enz released their breakout album entitled True Colours. The group would finally have a number one hit in the song “I Got You.” The album and hit single would help the band became known worldwide. In 1981, Spit Enz released their sixth album entitled Waiata. The album had an alternate title in Australia called Corroboree. At that time in the  early eighties, Split Enz was the number one band in New Zealand and Australia. They were popular around the world and in the United States and United Kingdom, but not like they were in their native homes of New Zealand and Australia.

Split Enz continue to have tremendous success in New Zealand and Australia in the early 80s. In 1982, they released their seventh album entitled Time and Tide. The album was filled with top 10 hits in their native homes. In the fall of 1983, Split Enz released the album Conflicting Emotions.  At the same time, founding member Tim Finn released his first solo album. Could this be the end of Split Enz, many people questioned? It turned out that it would be. Split Enz would release only one more album after Conflicting Emotions.

With the departure of Tim Finn who decided to embark on a solo career, Tim’s younger brother Neil Finn announced that he no longer wanted to continue the band without his older brother. The group released their final album in 1984 entitled appropriately See Ya ‘Round. The Ramones entitled their final album similarly Adios Amigos. After releasing nine studio albums from 1975 to 1984, the days of Split Enz had come to an end.

Below is a sampling of our favorite Split Enz songs. We hope you enjoy checking out these great songs.

One of our favorite Split Enz songs was the classic track “Poor Boy.” The song was released in 1980. It was issued on the album True Colors. The band released “Poor Boy,”as a single. It was written by Tim Finn. Check out the great keyboard solo by Eddie Rayner.

Continuing with our top 10 Split Enz songs list we turn to a true Spit Enz classic track. The song “History Never Repeats,” was released on the album Waiata. The song was a top 10 hit in both New Zealand and Australia.

We enter the second half of our top 10 Split Enz songs list with the great Split Enz song “Six Months In A Leaky Boat.” The song’s almost two minute orchestral opening eventually gives way to some great strumming guitars and a melody that sounds a bit like Electric Light Orchestra which I guess one could say sounds like The Beatles if you know what we mean.

Oh do we love this song. A killer groove and lyrical line sets the tone for simply a great rock and roll song. This one reminds us of the band The Undertones. The song “I See Red,” was released on the album Frenzy. The album was released in 1978.

The song “Message to My Girl” delivered a great rock and roll soul groove, augmented by clever chord changes and a heavy keyboard layered arrangement. At times, the band has sounded like Squeeze, or maybe we should say at times, Squeeze has sounded like Spit Enz.

Well this one was obvious. As much as we like to surprise our readers with the number one choice song for a band, we couldn’t with this one. Split Enz’s songs “I Got You,” was by far the band’s biggest hit. The song was the band’s only number one hit. It reached the number one spot in both Australia and New Zealand in 1979. The song also reached the UK top 20 and the top 50 in the United States.