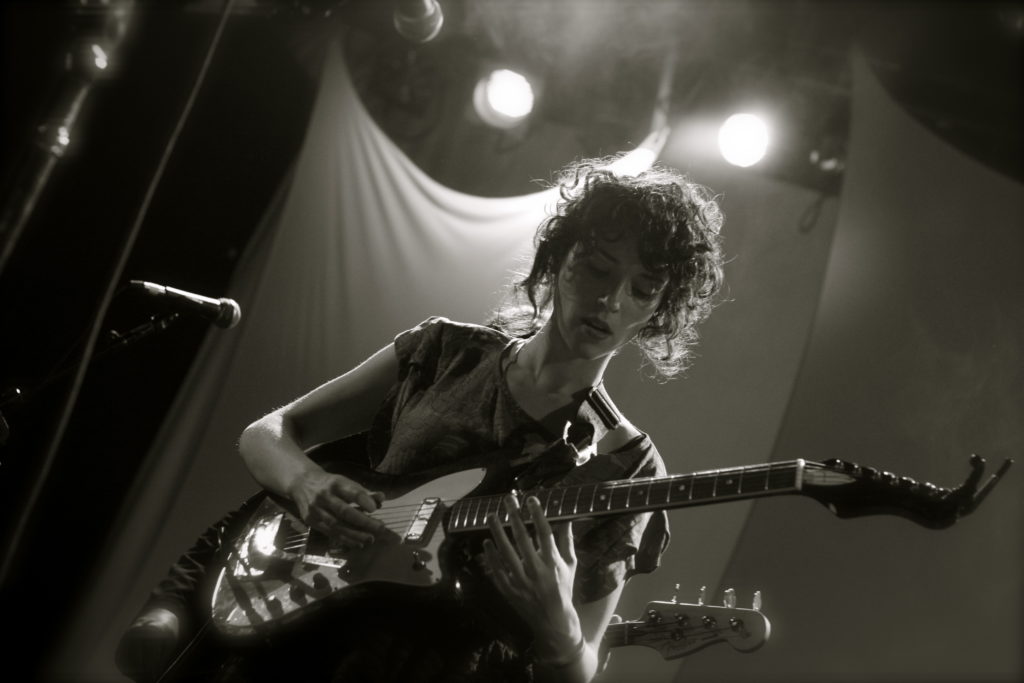 Our Top 10 St. Vincent Songs Of All Time list looks back at the career of a singer songwriter musician and amazing entertainer named Annie Clark who released music under the show business name St. Vincent. After performing with various bands, Annie Clark hit the music scene as a solo artist in 2007 with the release of her debut album entitled Marry Me. She would continue to release albums to critical acclaim from that point on. In 2009, she released the album Actor. That album was followed up with the record Strange Mercy in 2011. She would then go on to work with the Talking Heads legendary founder and brilliant artist David Byrne in releasing an album together entitled Love This Giant in 2012. By this time, Annie Clark had established herself as one of the great new modern day artists of the 21st Century.

Just when one thought she had already peaked, Annie Clark released the album St. Vincent in 2014 that won her first Grammy Award. It only continued to get better as in 2017 she released what we believe was her finest album up to that moment in time with the record Masseduction. Her most recent album was just released in 2021  just a few weeks ago entitled Daddy’s Home. Our Top 10 St. Vincent songs list takes a look at the first part of St. Vincent’s career and picks ten of our favorite St. Vincent songs. With an artist like Annie Clark who is still so young and is oh so brilliant, we will probably have to keep extending this list over the years. Hopefully this article will turn a lot of people onto this incredible talent. And one more thing….while we present all these great songs, one must be aware of how brilliant of a guitarist is. A talent that we will be looking at deeper in new articles that will showcase her guitar playing. She is one of those artists that we become an even bigger fan of after we have finished writing the article. She is simply a stunning talent.

We open up our top 10 Saint Vincent songs list with the great track “Digital Witness.” You gotta just love those horns that just dance around Annie Clark’s fabulous vocal right from the start. The song “Digital Witness,” was released on the St. Vincent album titled St. Vincent. The song was released as a single on January 6th 2014. It’s just a wonderful work of art echoing the styles of Kate Bush, Tori Amos and Fiona Apple. It’s more dancing, it’s more modern, it’s more hip and in many aspects it’s a little more fun.

There is definitely a strong Fiona Apple meets The Dresden Dolls vibe on this very depressing song entitled “Smoking Section.” However like all of Annie Clark’s music the songs just draws you in a trance without any hope for escape. Those lyrics are just very hard to forget. The song was released on the great St. Vincent album in 2014.

At number seven on our top 10 St Vincent songs list is the very seductive and swinging track “Pay Your Way In Pain.” The song was just recently released on the 2021 album Daddy’s Home. There is a lot of heavy 1970’s funk going on in this one. The song was released as the album’s second single. The song broke into the top 40 of the US alternative airplay section on the Billboard charts. It was a top 20 hit on the Billboard adult alternative album charts. In our book it was just a really good tune.

If You loved the great title track to St. Vincent’s Masseduction album,then there is no way your should miss Annie Clark’s performance of the song at the 2019 Grammy Awards with Dua Lipa. Just watch the video, there’s nothing else we can say about this one. The video is all you need…….you will watch this one over and over and over again.

At the halfway point on our St. Vincent songs list we present the funky dark, mysterious and I don’t know what else to call it song Birth In Reverse. And that’s the problem we are  having with Annie Clark’s songs. They are so hard to describe because they are so original sounding. We wish we had that problem with many more artists. Nonetheless make sure you check out this great son birth in reverse and watch the video below.It’s just astonishing.

At number four on our St. Vincent songs list we present the great ballad New York. This is such a magnificent ballad written about our hometown New York City. It’s tender, it’s emotional and it’s a serous heartbreaking love song done in her own original way. Brilliantly produced and performed, this one is simply breathtaking.

“Surgeon,” was the first single released on St. Vincent’s third album Strange Mercy. This is just another one of those incredibly original sounding songs by Annie Clark. Listen to her sing the chorus and play a very complex guitar lick. Take a listen to her great guitar solos at 4.00 minutes. That’s like superstar out of this world genius talent. The jamming at the end of the song between the musicians is jaw dropping.

At number two on our St.Vincent songs list is the killer track “Los Ageless,” with the great line “How could anybody have you and lose you and not lose their mind too.” This is such a great grooving song with a spectacular vocal by Annie Clark and some great guitar flourishes along with a beat to die for. The song was released on the album Masseduction which was issued in September of 2017. This is a slick pulsating dance track that defines just how great dance music could be when composed by such a brilliant artist as Annie Clark. The musicians on the song included Annie Clark on guitar and vocals Tuck Andress on guitar, Patti Andress on vocals, Greg Leisz on pedal steel, Jack Antonoff on synths and Evan Smith on sax.

We close out our St.Vincent songs list with the legendary song “Cruel.” The song was released on the album Strange Mercy. The Strange Mercy album was the third album released by St. Vincent. This would become the highest charting album of Annie Clark’s career at the time. Although her future albums would chart higher. The album was released on September 12, 2011. Annie Clark’s songs are so hard to describe in words. There so much originality to them. The melodies and rhythms sort of just dance around you pinching your soul sometimes in a tease  at at other times just a little harder where you feel the pain but you know you still like it.