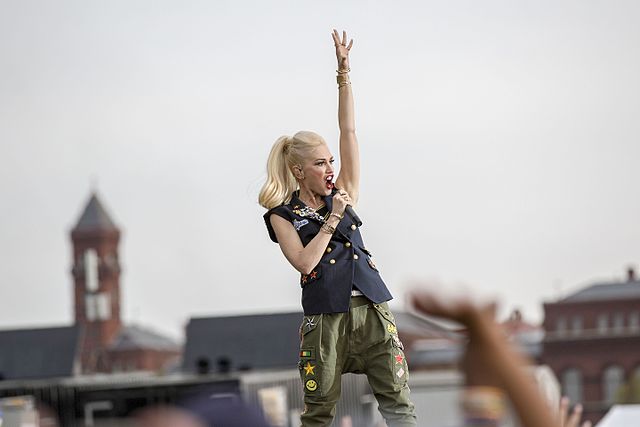 Our Gwen Stefani albums ranked list takes a look at the great solo albums released by Gwen Stefani since she departed from No Doubt. Her solo career was fueled by developing a very original sound of her own separate from the style of music she recorded with No Doubt. The Gwen Stefani solo sound was so original it inspired an entire new generation of female singers and artists who were clearly driven by Gwen Stefani’s artists accomplishment and commercial success. Gwen Stefani’s originality was easily found in her vocal phrasing. A style that she began to develop as the lead singer in No Doubt. A band that were very much quite original themselves and cutting edge.

As someone who has been in the music business since the 1980s, Gwen Stefani has been able to continue to appeal to a young audience by keeping herself fit, beautiful and looking so much younger than she actually is. A feat all of us wish we could achieve throughout our lives. So in many ways this wonderful woman has been a role model for people both young and old. Her music continues to be vibrant fresh and still very much original sounding.

As of this writing in 2021, Gwen Stefani has not released a large body of solo albums. There are multiple reasons for that. First and foremost is she really has nothing left to prove. Any new material she releases will probably be just based one the artistic desire to write and record new music. From a total career respective, Gwen Stefani has already released a lot of material. As a member of No Doubt she released six studio albums over a fifteen year period starting in 1992 with the album No Doubt. That albums was followed up with The Beacon Street Collection and the album that made No Doubt a household name Tragic Kingdom in 1995. Gwen Stefani and No Doubt released two more albums before breaking up. Return of Saturn was released in 2000 and the great Rock Steady album in 2001. At the time, they were one of the biggest bands in the world with so many hits and selling out concerts everywhere. And just like so many bands who were on top, they broke up.

Gwen Stefani released her first solo album in 2004 entitled Love. Angel. Music. Baby. The album covered so many different musical genres and was a huge success turing Gwen Stefani into an even bigger star than she was as the lead singer of No Doubt. Two years later Gwen Stefani released her second solo album entitled The Sweet Escape. Once again the album was a major commercial success and it served as an inspiration for a new generation of female artists.

We open up our Gwen Stefani albums ranked list with the singer’s holiday album entitled You Make It Feel like Christmas. We don’t usually include holiday albums when we take a look at an artist discography. Not unless it was such a spectacular Christmas album we feel we needed to mention it. The album You Make It Feel like Christmas was released on October 6th 2017. This is the most recent Gwen Stefani recording released. What we loved about this album was it just wasn’t a Christmas covers album. The album was split between six classic Christmas songs and six brand new original songs written by Gwen Stefani and her writing partners.

The album’s lead single was the track “You Make It Feel Like Christmas,” which was written by Gwen Stefani, Justin Tranter, Blake Shelton and Michael James Ryan Busbee. The song was recorded as a duet between Gwen Stefani and her husband Blake Shelton. This was one of the most gorgeous new Christmas songs written in recent memory. The second single from the album was the Christmas classics “Santa Baby.” We also loved that she covered Christmas songs from various generations starting with George Michael’s “Last Christmas,” and going all the way back to Irving Berlin’s “White Christmas.” Easily one of our favorite Christmas albums of all time.

Continuing with our Gwen Stefani albums list we present her third solo album entitled This Is What The Truth Feels Like. The album This Is What The Truth Feels Like would become Gwen Stefani’s highest-charting album of her career. The album hit number one on the US Billboard top 200 record charts. However, it came nowhere near as close in sales as her previous two albums had done. But of course much of that was due to the changing record industry as most people were no longer be buying CDs or albums.

Three singles were released from the album This Is What The Truth Feels Like. The album’s first single entitled “Used To Love You,” reached the number 52 position on the Billboard Hot 100. The album’s second single released in 2016 entitled “Make Me Like You,” made it to the number 54 spot on the Billboard top 100. The album’s third single “Misery,” was not released in the United States, but did chart Australia. The limited success of the album singles was once again probably do to a changing record industry. All in all, the album This Is What The Truth Feels Like was a strong effort by Gwen Stefani and show continued growth in her songwriting and performing career.

The next two albums on our Gwen Stefani albums list are pretty much interchangeable as far as commercial and artistic success. We could have really placed either one in the one or two spot. Up first is the great album The Sweet Escape. The album was released on December 1st 2006. It was her second solo album. With her return to No Doubt on hold, she wound up releasing a second solo album instead. Her first solo album was such an extreme commercial success, all her dedicated fans went crazy when they discovered she was releasing another one. The Sweet Escape wound up actually charting higher than Love. Angel. Music. Baby as it peaked at number 3 on the Billboard top 200 albums charts. It did not sell as well as Love. Angel. Music. Baby which sold 4 million copies in the US .The Sweet Escape sold 1.7 million.

In the number one spot on our Gwen Stefani albums list is her extraordinary debut album Love. Angel. Music. Baby. The album was released on November 12th 2004. This record stands has Gwen Stefani’s first solo album. And what an amazing and successful debut album it was. One of the most successful debut albums in music history. It was a huge commercial success as a peaked at number five on the US Billboard top 200 albums list. The album hit number one and Austria and number four in the United Kingdom.

Six big-time singles were released from the album. The album’s first single release was a song entitled “What You’re Waiting For.” The song originally was not a big hit in the US peaking it only number 47 on the US Billboard Hot 100. However it was big in Austria as it hit number one there. “What You’re Waiting For,” was also a big hit in the United Kingdom peaking at number four.

The album’s second single “Rich Girl,” was a huge hit in the United States breaking into the Billboard Hot 100 top 10 and peaking at number seven. “Rich Girl,” hit number two in Austria, number three in New Zealand, number six in Switzerland and number four once again in the United Kingdom. The single sold millions and millions of copies. However, third time was the the charm for Gwen Stefani as her third single released from the album entitled “Hollaback Girl,” hit number one in the United States making it her only number one single of her career. The song sold five million copies in the US alone. Three more songs were released from the album including “Cool,” which was another top 20 US hit, “Luxurious,” which peaked at number 21 and the album’s final single “Crash,” which kind of crashed when compared to the success of the previous singles as it only reached the number 49 spot on the US Billboard Hot 100. What an amazing debut album and one that I think we could call a successful record album.