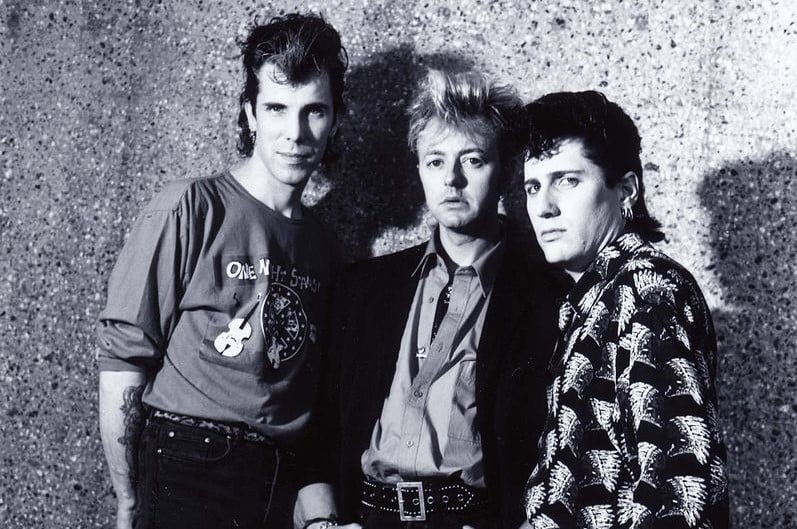 Our Top 10 Stray Cats Songs list looks back at the career of a Long Island rockabilly band who had great success with the genre on a mass cultural scale. While the band only had a handful of hits in the U.S., they quickly became one of the most loved bands of the 1980s with their signature retro sound with a modern flare. The band was fueled by the songwriting skills of band leader Brian Setzer. The bandleader’s signature guitar playing and vocals defined the core sound of the band. However, musicians Slim Jim Phantom on drums and Lee Rocker on bass also contributed mightily to the band’s sound and style. As a trio, the Stray Cats were one of the most exciting groups to hit the scene in the early 1980s. For a while they were a favorite of MTV which also helped ignite the band’s popularity. Below are 10 of our favorite Stray Cats songs. This was a fun one to do.

We open up our top 10 Stray Cats songs list with this very moody cinematic song “Cross Of Love.” This is a a great one. Listen to Brian Setzer’s smoking guitar solo. The song was released on the album Choo Choo Hot Fish. The record was released in 1992. The song “Cross of Love,” was written by Brian Setzer and Larson Paine. The song as well as the entire album was produced by Dave Edmunds.

Continuing with our Top 10 Stray Cats songs list we go back a few years to 1989. The song “Bring It Back Again,” was released on the album Blast Off. The band had reunited for this great record and went out on tour with Stevie Ray Vaughan. While the album did not spawn any hit singles, it was filled with great new Stray Cats songs that made fans of the band very happy. There’s a bit of Elvis Presley in this one.

Well its two out of the first three on this top 10 Stray Cats songs list from the great album Choo Choo Hot Fish. At number eight we present the song “Cry Baby.” The song was written by Michael Lanning and Rick Bell. The legendary Dave Edmunds played guitar and added vocals on the track.

Our Top 10 Stray Cats songs list include two tracks for the most recent album entitled 40. Not may people were expecting a new Stray Cats album in 2019, but that’s what rock and roll fans were happy to get. This one contains some of those great signature Brian Setzer guitar licks. Just love this one. The song “Cat Fight (Over a Dog Like Me),” was released as the album’s only single but did not chart.

“Built For Speed,” was the title track to the Stray Cats United States debut album Built For Speed. It was one of the only new songs released on the album that was not taken form their first two UK albums. The song’s raw production value is what makes it so endearing to fans of 50s rock and roll. The song was written by Brian Setzer.

The great Stray Cats album Built For Speed featured so many killer track. “Runaway Boys,” was one of the album’s greatest tracks. Music fans in the the UK remember this one well as it was the band’s first single release of their career. It did not chart in the US, but it was a top 10 hit in the United Kingdom. The song also hit number one in Finland making it the band’s only number one single of their career.  Listen to Slim Jim Phantom drums on this one. Just stunning! “Runaway Boys,” was written by Brian Setzer, Jimmy McDonnell.

At number two on our top 10 Stray Cats songs list is the band highest charting single of heir career. It was third times the charm for the great single “Stray Cat Sturt.” The song was originally released as a single from the band’s UK debut Stray Cats in 1981. A year later it was released as a single in the U.S at the same time as the US debut album Built For Speed was released. After the great single entitled “Rock This Town,”  from the album Built For Speed became a hit, EMI Records rereleased “Stray Cat Sturt,” as a single one more time. With heavy rotation on MTV, “Stray Cat Sturt,” hit number three on the Billboard Hot 100.

We close out our top 10 Stray Cats songs list with the Stray Cats legendary recording entitled “Rock This Town.” The song was released on the band’s first UK album entitled Stray Cats. The album was released in the UK in 1981. The song finally made it to the United States shores in 1983 when it was released on their US. debut album entitled Built For Speed. While “Rock This Town,” may not have charted as high as “Stray Cat Strut,” in the U.S, over time the song has proven to be far more popular. It remains the band’s signature song and was performed by Brian Setzer throughout his solo career including his big band performances. At the time of release in 1983, Rock This Town,” became a top 10 hit on the Billboard Hot 100 peaking at number nine. The song was written by Brian Setzer. In many ways the song set the standard for modern rock and roll rockabilly.